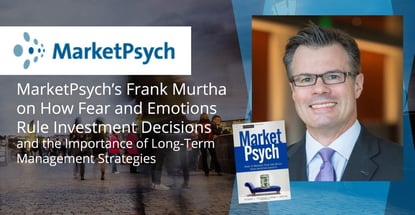 In a Nutshell: Stock market investors often make decisions based on emotions — namely fear. We spoke to Frank Murtha, Ph.D., a behavioral finance expert and Co-Founder of MarketPsych, to learn more about how investor sentiments can drive decisions and prices. Dr. Murtha said fear combined with the natural instinct to be reactive can lead to detrimental investment strategies. He said for long-term success, holding steady positions and keeping reactionary trading to a minimum is the safest strategy. His company, co-founded with Richard Peterson, MD, employs behavior economics expertise to uncover rich data on the psychology behind investing and delivers valuable resources to advisors to help guide their clients.

Stock market prices can go up and down so much within 24 hours that shareholders may feel like they’re being tossed around on a ship at sea. And like the ocean’s ebb and flow, the market can be swayed by currents set in motion from afar.

In December 2016, then-President-Elect Donald Trump sent out an early-morning tweet saying the cost of Lockheed Martin’s F-35 fighter jet program was out of control. The aerospace giant’s stock prices immediately took a hit — dropping by 5% — and were still down 2.5% from the previous trading day when the markets closed.

That kind of price fluctuation causes very real impacts on shareholders’ portfolios. And the fluctuation, while set in motion by Trump, was ultimately caused by consumer sentiment. As with any product, stock prices are determined by supply and demand. If consumers think a company is making irresponsible decisions, fewer people want to buy stock from that company (and more people are unloading the stocks), and the price drops.

When consumers feel positive about a company, more people want to buy stocks so the demand goes up, along with the price.

This is just one example — and a very rudimentary explanation — providing insight into the complex field of behavioral finance.

“Behavioral finance, a subfield of behavioral economics, proposes psychology-based theories to explain stock market anomalies, such as severe rises or falls in stock prices,” according to Investopedia. “The purpose is to identify and understand why people make certain financial choices.”

We recently had the opportunity to speak with Dr. Murtha to learn more about how consumer sentiment and psychology impact stocks, and the importance of maintaining a steady course when it comes to portfolios.

“For my money, behavioral finance has always done a very good job of leading you to the door,” Dr. Murtha said. “But in order to walk through it, you have to borrow from some other disciplines. Behavioral finance highlights the quirky, irrational decisions, but we also look at the tools people can use to make better investment decisions.”

Fear Rules the Day When it Comes to Stock Markets

“Fear is, is the dominant investor emotion,” Dr. Murtha said. “People talk about fear and greed, almost the way they talk about thunder and lightning — like these are two things that go together. But the impact is not even close.”

Greed doesn’t even make a dent in the sort of power fear holds over people’s investing behaviors, he said. Fear is the most important emotion, by far, he said.

“The shorthand would be that the higher the amount of fear, the worse it is for the market,” Dr. Murtha said. “But fear has a tipping point that tends to play out as a negative indicator. When there are massive outflows from stocks, it’s generally a precursor to a rebound.”

MarketPsych provides a chart measuring fear levels in the news and on social media compared to the performance of S&P 500 stocks.

The most striking example in recent times was during the tech boom and crash of the early 2000s, he said.

“That was right when we started MarketPsych. Right before things reached their top, everybody was piling in,” he said. “And just a month before it hit its bottom, that was the highest outflow ever seen in the market. And then it just went straight up from there.”

MarketPsych presents a “Fear Levels vs S&P 500” chart on the front page of its website. The chart, which goes back to January 2018, tracks the daily movements of the S&P 500 alongside fear levels based on the news media and social media.

“Our researchers scrape the internet and find terms that are related to the emotion of fear and they give them weightings and codings, and they’re able to essentially take the market temperature,” Dr. Murtha said. “They can focus in on specific locations or populations. And from that, they get a general sense of what the market emotion is.”

Dr. Murtha admits that he treads lightly when he discusses certain aspects of investing but he said the distinction between investing and gambling is an arbitrary one.

“I don’t want to diminish the world of investing in some people’s eyes, but it is about risk and reward,” he said. “And so is gambling. Most people think of gambling as a losing proposition. But if you do it right as an investor, then you get to be the house.” 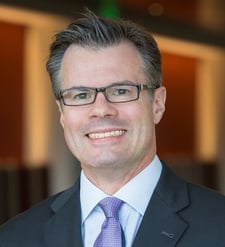 Frank Murtha, Ph.D., is the Co-Founder of MarketPsych.

He said that, because we know the trends of the market over time, which indicate that a diverse portfolio with long-term positions are the most profitable, investors are better off to follow this strategy.

“You can go with a short-term approach and still be fine, but you’re going to make it a much more difficult endeavor,” he said. “If you want to be an active manager, I’m not going to tell someone not to do that.”

The instinct to take action and be actively involved in things is just human nature, and Dr. Murtha said it’s not necessarily a bad thing, but investors should ensure they are segregating their investment funds from the other funds they need in their everyday lives.

“You also don’t want active trading to distract you from the fact that this money is designed to help support you down the road,” he said.

Dr. Murtha said there have been times when investors see a traditionally strong stock taking a dive and their instinct is to sell off their positions before they take a big hit or with the idea to buy it back low. But there is no way to tell how low a stock will go or how long it will decline.

Rather than selling off all shares, he said investors can still satiate their desire to take action by selling off perhaps one-tenth of their shares. Then if the stock continues to decline, they can buy their one-tenth back at a lower cost and profit if and when it goes back up.

Strategies like this give investors the freedom to participate in the market while mitigating their risk.

MarketPsych’s fear index is just the tip of the iceberg when it comes to the data, research, and insights available from the company. It produces the global standard in financial sentiment data derived from thousands of news and social media outlets.

“Sentiment scores are computed on a minutely basis for a variety of complex emotions and macroeconomic topics using our proprietary natural language processing engine,” according to the company website. 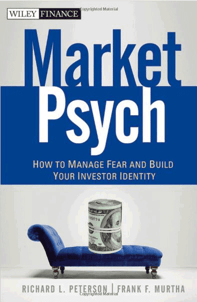 Dr. Murtha, along with MarketPsych Co-Founder Richard Peterson, authored “MarketPsych: How to Manage Fear and Build Your Investor Identity.”

“The book is designed for everybody,” Dr. Murtha said. “And it’s based on a pretty simple premise, which is that you really need to know yourself before you’re going to be able to invest successfully down the road.”

He said the book supports the premise by offering information and resources on how investors can get to know themselves and develop an investor identity.

“In an easy and entertaining style that masks the book’s scientific rigor, the authors make complex scientific insights readily understandable and actionable, shattering a number of investing myths along the way,” according to the book description.

The book aims to give readers an understanding of their true motivations behind their investments, teach them how to avoid unseen forces that may subvert their performance in the market, and establish a strong foundation for long-lasting success in the world of investments.

Ultimately, investors who gain a deeper understanding of the psychology behind investment choices, stock prices, and market movements can make smarter decisions and see their portfolios grow.