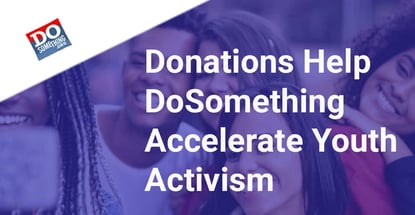 In a Nutshell: The nonprofit organization, DoSomething, educates and equips young people to create positive change and become future civic leaders. The nonprofit operates globally and engages with the youth in both online and offline social campaigns. Unlike many other organizations, DoSomething inspires young people to learn by doing and provides opportunities to give back in their community while being part of a global collective of change makers. The nonprofit also leverages opportunities for students to earn scholarships and verified volunteer credits through activism without any GPA or essay requirements.

Finding the right path and the right group to join can be challenging for young people looking for a way to make a positive impact in society.

DoSomething was founded by Andrew Shue — yes, that Andrew Shue from “Melrose Place” — along with his childhood friend, Michael Sanchez. Their goal at the time was to make volunteering as cool as sports.

Nearly 30 years later, the nonprofit is still going strong, having activated more than 5 million young people to create offline impact in every US area code and in 131 countries around the globe.

“We are truly the center, the hub, for youth centered activism,” said Jenn Moore, VP of Development at DoSomething.

Over the years, the nonprofit’s volunteers have assisted communities in a number of ways, including cleaning up over 3.5 million cigarette butts. And donated clothes for half of America’s youth that are in homeless shelters.

Several other volunteer achievements include developing the first student-powered guide on improving race and history education to ensure that curriculums are more culturally responsive. In one instance, DoSomething powered the petition that convinced Apple to create emojis representing people of color.

Central to DoSomething’s mission is to get young people to fully understand the power of democracy and what they can do to protect it.

Through its campaigns, the nonprofit has registered more than 375,000 young people to vote since 2018, including 16,000 new registrations ahead of the 2022 midterm elections.

With many advocacy organizations, there tends to be a deference to social media as the preferred way of engaging with campaigns. People might post or share activities that they’ve engaged in, but the problem is that there’s no way as a member to really connect the dots and understand why putting in the effort is so important.

At DoSomething, the focus is on building a collective and ensuring volunteers come back to the organization, share a structured report on what they did, and get them to reflect on their actions.

“For us, the end metric is to build civically engaged leaders, and that might take years to happen,” said Max Steinman, VP of Communications and Marketing at DoSomething.

Whether volunteers are passionate about climate injustice, mental health or other issues, Steinman said that DoSomething wants to facilitate that passion and help young people explore their activism, find their civic spark, and then go off into the world to make a greater impact.

Steinman elaborated that DoSomething is continuing to evolve under a new strategic plan designed to measure against shifts in attitudes, beliefs and behaviors so the nonprofit can build stronger leadership skills and abilities among young people over time.

DoSomething was originally focused on millennials, given that it was founded in 1993. And in order to shift to the newer generations, the nonprofit has gone through a reset of sorts to understand what the current target demographic of 13 to 25 year-olds want to do.

“That’s what makes DoSomething really successful at being able to connect to so many young people across the country and across the world,” said Moore. “We came out with a new mission statement which is about fueling young people to change the world.”

The nonprofit has conducted a number of surveys asking young people what they care about and how they would like to get involved. Interestingly, they found that more than 70% of young people say they want to get involved, but 32% said they didn’t know where to start.

While that may feed into negative stereotypes about young people not wanting to engage or not caring about the future, Moore said she believes they just need to have a place to start.

Moore said DoSomething provides an entry point for young people who are just starting this journey, and it’s relatively easy for them to get into it. And if they want to get more involved, DoSomething can help them in that process.

As DoSomething begins to implement its new strategic plan, the organization has already laid out the groundwork and has run several successful campaigns leading up to it.

Currently, the nonprofit is running a campaign called See Us, Hear Us, which encourages students to share how they are experiencing climate injustice in their communities, and then share a vision for what a greener future would look like.

Steinman explained that it isn’t just a matter of having young people sharing what’s happening in their community. It also involves having them submit photos, videos and other forms of creative expression to share what a green space in their community could look like and to address the issues of climate injustice they are experiencing.

Another successful campaign was called It’s (NOT) All In Your Head. The campaign encouraged young people to figure out how to address issues of inequity and inclusivity in schools as it relates to mental health.

DoSomething brought together members for a program development hackathon to inform the creation of It’s (Not) All In Your Head. “It’s more about how we’re centering young people in the creation and offering different ways for them to be plugged in throughout the process,” said Steinman.

Moore said these activities are more about developing a space for experiential learning, rather than talking at young people about important issues. “We just like getting them to dive in, take the action and have that learning-by-doing experience,” she said.

While DoSomething receives support from institutional sources, the nonprofit also has a lot of really great success stories about individuals who like to give.

Support comes from people who understand that youth do have a voice and they just need adults to give them a seat at the table and really listen to what they’re trying to say.

Supporters can help with fueling the movement by going to DoSomething’s donation webpage.

Moore said that a small donation can help the nonprofit ensure at least one young person gets to participate in a campaign. Even a donation under $50 can help make sure that it happens.

She said DoSomething worked with over 300,000 young people last year, and she hopes that the nonprofit can build on this reach to get more support.

DoSomething also offers volunteer credits for a large portion of its programs to help young people meet their needs.

“What’s really lovely about DoSomething is that when you come to the site, you have so many options for ways to get involved,” said Moore. “There’s a place for you to find something that matters to you.”

Moore said the nonprofit offers a nice balance between online and offline activations. Volunteers can come to the digital hub and see all the different options they can explore. Moore explained that volunteers can take that digital experience and take that back to their communities and make an actual difference where they live.

“It’s something that I think the organization is really proud of,” said Moore. “One of the strategic pillars of our new plan is about removing the economic blockers for young people so they can fully use their power.”

As DoSomething continues to inspire more young people to choose civil leadership roles, the newer generation can be assured that someone is looking out for their future.