Darktrace: An AI Cybersecurity Platform that Serves as the Immune System for Enterprise Business Data by Fighting Off Threats 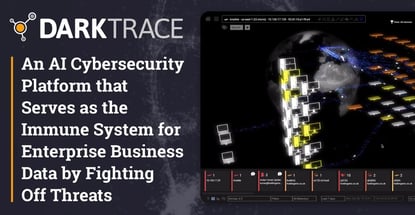 In a Nutshell: Cyberthreats are more prevalent and advanced than ever, especially within the finance industry where trillions of dollars move around the world in complex infrastructures. Darktrace offers a whole new approach to cybersecurity with its Enterprise Immune System, which is modeled after the human immune system. Rather than expending effort on outdated perimeter security systems, Darktrace attacks threats quickly within the system with its Antigena solution. Meanwhile, Antigena Email eliminates threats within inboxes, which is where 94% of threats originate.

The firewall has long been hailed as one of the key components in protecting software at all levels from outside threats. But cybersecurity expert Justin Fier disagrees and offers a handy analogy to explain why a perimeter defense is insufficient when it comes to cyberthreats.

Fier is the Director of Cyber Intelligence and Analytics at Darktrace — a cybersecurity company that is making waves in the industry by rethinking how digital security should work. Fier said from its inception, Darktrace wanted to turn the industry on its head.

Many of the company’s experts are former intelligence officers who came to the private industry from the U.S. or British government, Fier said. They spent years in high-level cybersecurity positions where they became adept at breaking into networks despite supposed next-generation security systems standing in their way.

Because of the Darktrace team’s unique point-of-view regarding security, the company’s security solutions are built from the ground up with a new spin on cybersecurity for today’s increasingly digital businesses.

This should come as great news to the finance industry in particular.

“With trillions of dollars in assets continually moving across complex infrastructures and around the world, it is no wonder that the financial services industry has long represented the holy grail for today’s most sophisticated cyber-criminals,” according to Darktrace.

While financial institutions invest heavily in high-level security systems, the systems that have dominated the market are predicated on out-dated approaches to cybersecurity, according to the company. The nature of cyberattacks in today’s ecosystem has already outpaced supposed modern security measures.

We recently spoke with Fier to learn more about Darktrace’s unique and innovative approach to cybersecurity and the momentum the company has gained among industries around the world.

Darktrace’s complex security ecosystem functions as a singular entity but at its core is the Enterprise Immune System.

“The Enterprise Immune System is just that — a system that’s modeled after the human immune system,” Fier said. “The big differentiating factor to think about is that we make the assumption that you’ve already been breached or you will be breached.” 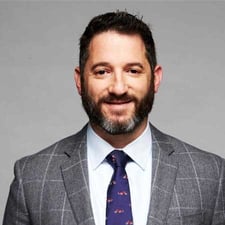 Justin Fier is Darktrace’s Director of Cyber Intelligence and Analytics.

Rather than spending energy on trying to keep the bad guys out, Darktrace says let them in and the company’s technology will detect them within seconds and give clients the tools to stop them in their tracks before they can do any damage, Fier said.

The system “learns and understands ‘self’ for everyone and everything in the business, and can spot the subtle signals of an advanced attack — without relying on rules, signatures, or prior assumptions,” according to the Darktrace website.

The system can be installed in one hour with no further configurations or manual tuning involved. For the first week after installation, Fier said the system is just learning by tracking every device, every user, and every pattern of life within the network ecosystem.

“Unlike traditional approaches that rely on blacklists, rules, and signatures, the immune system approach learns from your data — forming a bespoke and evolving understanding of your digital environments,” according to the company. “This unique approach enables Darktrace to detect the most sophisticated and stealthy cyberthreats that other tools miss.”

The company’s tech-savvy and aggressive approach to cybersecurity has helped it gain traction across numerous industries and the company is growing at an impressive rate.

Darktrace has two headquarters — one in San Francisco and one in Cambridge — and 44 offices around the world.

Working in conjunction with Darktrace’s Enterprise Immune System is Darktrace Antigena, the world’s first automated response solution, which swoops in to squash the bad guys in their tracks.

“Powered by award-winning cyber AI, it responds to cyberattacks in a matter of seconds — when security teams are overwhelmed or simply aren’t around,” according to Darktrace. “The technology works like a digital antibody, intelligently generating a targeted and proportionate response whenever a threatening incident arises in-network, email or cloud environments.”

This system is in contrast to the intrusion prevention systems of the past, Fier said, which require time and effort from the business once a threat appears.

“Just an hour’s worth of downtime can cost a company hundreds of millions of dollars, depending on the industry that you’re in,” he said. “So it’s not really a feasible approach in today’s day and age. Antigena is going to take responsive actions on your behalf — think of it as highly surgical.”

Antigena responds to a cyberthreat every three seconds, according to the company, and is crucial for defending against fast-moving threats such as ransomware.

“Antigena reacts in seconds, giving your security team time to catch up without interrupting daily business operations,” according to the website.

For some, it may seem perilous to simply hand over the decision-making process about how to respond to threats to an AI platform, but Darktrace lets users create their own path to using Antigena.

“Every organization’s journey to Autonomous Response AI is different,” according to the company. “But building trust in Antigena is easy — our mobile app gives you direct oversight and control over any actions taken.”

Anitgena Email Responds to Threats in Inboxes, Where Companies are Most Vulnerable

“No matter who you talk to, you’ll never find someone who will argue with the fact that email is always going to be the most porous point of your network,” Fier said. “But we need it to function, there’s just no way around it.”

In fact, 94% of cyberthreats originate in email inboxes, according to Darktrace. And Fier said that, no matter how many times email users are educated about the dangers of clicking suspicious links, there’s still always one person in an organization who will click it. 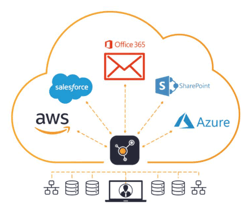 But he said that, with today’s advanced email threats, the endusers are not to blame. Modern AI-based attacks have the capability to generate emails mimicking the writing style of colleagues, bosses, and other regular email contacts. Even the most vigilant employee can be fooled.

Humans can essentially no longer easily tell the difference between an email phishing scam and a real email, according to Darktrace.

“Antigena Email, launched in February 2019 for Office 365, has proven a powerful defense against a wide variety of digital fakes as well as account hijacking, email spoofing, and targeted email attacks,” according to a Darktrace press release.

The company expanded its email offerings in early 2020 to cover G Suite and Microsoft Exchange.

“Armed with this rich (AI) knowledge, Antigena quickly and precisely fights back against email-based threats that bypass tools which only analyze email traffic,” according to the press release. “These include supply chain attacks, hijacked accounts, AI attacks, and other advanced forms of targeted attacks.”

Whether threats are in inboxes or penetrating networks, Darktrace — with its AI-based technology that’s modeled after the human immune system — is meeting threats head-on and eliminating them quickly. And if the platform’s continuing widespread adoption is any indication, Darktrace truly is effective in an age of extremely advanced cyberattacks.