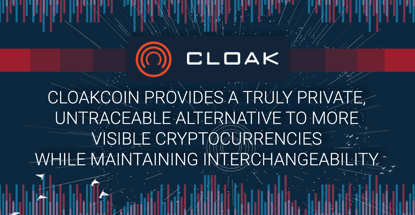 In a Nutshell: The world of cryptocurrency faces an inherent conflict due to the transparent nature of blockchain technology and the importance of protecting privacy and sensitive data. CloakCoin provides a private and untraceable method to conduct cryptocurrency transactions by obfuscating data and implementing privacy measures akin to the TOR private internet browser. The company also promotes fungibility — the ability to maintain consistent value and interchangeability among digital coins — in the crypto world. CloakCoin operates via Enigma, a secure payment system where transactions cannot be traced.

The rapidly evolving worlds of blockchain and cryptocurrency have brought us a number of valuable technological developments in recent years.

People are able to easily transact outside of the traditional financial ecosystem, distributed ledgers provide a permanent record of contracts and transactions, and the immutable ledger delivers ultimate transparency.

But some in the crypto world have been critical of the lack of privacy that comes along with these developments. Since all transactions are visible on the blockchain, users are exposed to unethical hackers who could use the transaction records to access their personal data — and digital assets.

Let’s say you bought some Bitcoin and were shopping online and purchased a pair of shoes from a company that accepts Bitcoin as payment. The average user would simply pay from his or her Bitcoin wallet. Now, the merchant and payment processor have access to your Bitcoin wallet address.

Should either of those companies get hacked, or even if an unethical employee goes snooping, your Bitcoin address and access to your digital assets could fall into nefarious hands.

The developers behind CloakCoin recognized these issues with Bitcoin and other popular cryptocurrencies and set out to make a truly private and untraceable digital coin.

We recently spoke to Joshua Marriage, Global Spokesperson and Lead Coordinator at CloakCoin, to learn more about how the privacy coin and the company’s payment system, Enigma, work.

“There’s this idea that we’re sort of careening towards a cashless society,” Marriage said. “And we’re just trying to make a digital equivalent to cash, really. A digital version, where you can spend it freely.”

Marriage noted that CloakCoin does not condone illegal activity, and the company’s philosophy is to protect the right of individuals to maintain power over their money without having to involve other parties.

“The original CloakCoin coders saw that there was an issue with Bitcoin in terms of ease of use for people to stay private,” Marriage said. “So Bitcoin can be private if you use it correctly, but it’s very difficult to do so.”

The average Bitcoin user likely does not know how — or may not prioritize putting forth the effort — to go through the arduous process of making the transactions truly private.

Joshua Marriage is Global Spokesperson and Lead Coordinator at CloakCoin.

Marriage said the concept of privacy within transactions is often misunderstood and carries a stigma around it. People may argue that there is no need for privacy if they aren’t doing anything illegal.

But Marriage points to the theory of surveillance capitalism to argue for the importance of maintaining privacy. The theory, popularized by sociologist Shoshana Zuboff, explores the notion that, in an increasingly digital marketplace, corporate actors collect consumer data and integrate themselves into our daily lives to drive profits and commodify as many aspects of our lives as possible.

Maintaining the privacy of online transactions is one effective way to guard against this corporate intrusion.

So, the CloakCoin creators established a system to achieve privacy in a more user-friendly way than Bitcoin.

“They took the same concepts that TOR, The Onion Router, works on for private internet browsing and essentially applied it to the CloakCoin network,” Marriage said. “And then, the network is made up of all the computers that talk to each other and further obfuscate things.”

The company employs a mix network approach. Rather than network users and data only being protected by layers of encryption, the system breaks up transactions into small, random pieces that get bounced around in the network which makes them more difficult to track.

“It all came about in the same spirit as Bitcoin from some cypherpunk enthusiasts, but with a more specific focus on that transactional freedom,” Marriage said.

Fungibility is a Key Component to the Longterm Success of Cryptocurrency

Another important factor driving CloakCoin is the mission to maintain fungibility in cryptocurrency — a topic the company tackled on its website to help educate the CloakCoin community on the seriousness of the issue.

Fungible coins and tokens maintain the qualities of equality, divisibility, and must be capable of mutual substitution. The cryptocurrency community can’t afford to lose any of those traits within the ecosystem, according to CloakCoin.

“In the world of fiat, a $5 bill is a $5 bill regardless of its history. If Alex borrows $5 from Gladys, Alex is free to use any legitimate, same-currency $5 bill on the planet as repayment,” according to the website. “No matter if Alex’s money spent time in a drug lord’s briefcase or 10 years in prison as barter for cigarettes, that $5 provides the same purchasing power in relation to all other $5 bills of its kind.”

Mutual substitution is the notion that, as in the world of fiat currency, Alex can repay Gladys with any $5 he chooses, it does not have to be the same $5 bill that Gladys gave him. In the world of cryptocurrency, coins are digitally traceable and CloakCoin posits that a crypto coin’s past should not determine its validity for its current holder.

“To illustrate a real-life example of why non-fungibility can harm cryptocurrencies, let’s go back to the Coincheck heist of early 2018,” according to the article.

The Coincheck exchange was hacked and lost $500 million in XEM coins in 2018. In an effort to find the culprits, the NEM Foundation attempted to determine if the stolen coins had re-entered trading platforms via its automated tagging system.

“Timing is everything here, but pretend you were the unwitting recipient of stolen XEM after trading them for BTC on your favorite exchange,” according to CloakCoin. “Now imagine waiting a week and trying to trade the XEM  —  that you didn’t steal  —  for ETH, only to have your trade rejected.”

When a coin’s history is completely traceable, it can be labeled as clean or illicit.

“If the legitimacy of your rightfully-purchased cryptocurrency comes into question, even though poor timing is your only association with pillaging, that crypto is virtually useless  —  which defeats the whole purpose of trustless transactions in the first place,” according to the company.

CloakCoin runs on Enigma, which is the crypto’s private, secure, and untraceable payment system. It forms the basis of future development for the company as well as the current infrastructure to facilitate transactions and decentralized applications running on the CloakCoin network.

CloakCoin transactions are conducted on the Enigma platform, which prevents traceability and delivers staking rewards.

“There are people who store a portion of their wealth in crypto,” he said. “They can essentially make that money disappear if they choose. In an experiment to see that they can purchase CloakCoin, they can conduct an Enigma transaction on our blockchain, then be able to prove to themselves that the technology can do what it says it does.”

And all Enigma messages are hashed and encrypted using CloakShield, which ensures data integrity with symmetric RSA encryption backed by an Elliptic Curve Diffie Hellman key, protecting against some of the most detrimental crypto attacks.

Marriage said users can participate in the network as a node without any special equipment other than a normal computer. This distinguishes the network from many others that more often than not require very high computing power and specialized equipment.

He said CloakCoin is a pure proof-of-stake (PoS) crypto and users have been enjoying the staking rewards.

“It works out to be pretty much exactly 6% per year in staking rewards,” Marriage said. “With the more recent bear market, it’s not necessarily a lot in terms of dollar value, but even as the dollar value has gone down, users are accumulating more coins. It’s been pretty cool; a lot of people are really into the staking.”

A New Code Base to Improve Speed and Security

“We just published a big developer report that shows the progress we’ve made in our first five years and looks at our plans for the next five years,” he said. “We’ve also got a full migration to a new version of our code base coming. It’s going to make things a lot faster and provide even better security.”

The new code base will also give the company opportunities to build apps and other features that can integrate with CloakCoin, he said.

CloakCoin and its Enigma network provide the opportunity to transact with cryptocurrency in a truly private and untraceable manner.