Scottsdale’s Museum of the West Gives Travelers a Unique Destination to Witness Art and Learn About the Frontier’s Past, Present & Future 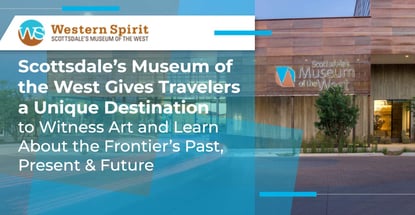 In a Nutshell: Western Spirit: Scottsdale’s Museum of the West captures the rich history of the American West through unique art collections and exhibits. The 43,000-square-foot museum is set for a 30,000-square-foot expansion in the near future. The expansion is part of the neighborhood revitalization project in the area, which will establish Museum Square and see two hotels go up adjacent to the museum. And, of course, if you’re traveling to Scottsdale, Arizona, for the museum, you’re going to want to visit the rest of the city’s historic downtown, taste some local cuisine, and soak up the rich and diverse culture.

As credit card enthusiasts, we’re always looking to tell our readers about great ways to rack up — or redeem — credit card points and rewards.

We also believe everyone could use a good vacation from time to time. And traveling just happens to be a fantastic way to put those hard-earned credit card points to good use on food, air miles or lodging, or to accrue new points toward your next vacation. 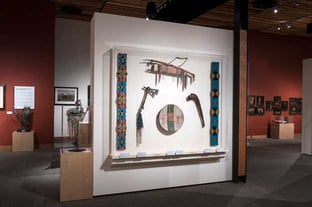 Western Spirit: Scottsdale’s Museum of the West captures the history of the American West through diverse exhibits of art and artifiacts.

And thankfully, travel is more accessible than ever before, but with so many choices it can be hard to decide exactly where your next getaway should take you. America is full of vacation gems and Scottsdale, Arizona, offers a beautiful backdrop for a scenic holiday with plenty of art, culture, and history to soak up along the way.

Among the many activities and attractions available in Scottsdale, we recently discovered Western Spirit: Scottsdale’s Museum of the West and reached out to CEO Mike Fox to learn more about the museum’s history, robust cultural exhibits, and future plans.

“The uniqueness of this institution is that we are to be a storyteller about the American West — both its past as well as the present,” Fox said. “We’re also looking to the future of the region, and what opportunities exist and what our responsibility to it would be.”

The museum opened in January 2015 and was the realization of a decades-long vision within the Scottsdale region to develop a museum dedicated to the 19 Western U.S. states, as well as its bordering neighbors of Mexico and Canada.

The Museum Brings History to Life via Western and Native American Art, Artifacts, and Living Cultures

The official mission of Western Spirit: Scottsdale’s Museum of the West is to boldly immerse “its guests in the unique story of the Greater Western region, illuminating the past to shape our future.”

Fox said this mission is realized through the use of rich art, artifacts, memorabilia, and media of the West.

“Since we opened in 2015, we have been predominantly dependent upon institutions and individuals to loan us the best of Western art and artifacts to help us fulfill our mission,” he said. “And we’ve been really fortunate and are very thankful to many people who have felt that we are worthy of their collections to either be gifted to us or to belong to us.” 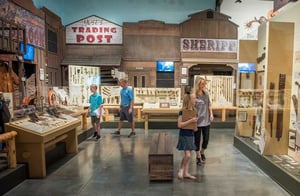 One of the museum’s most expansive permanent exhibits is the Spirit of the West, which contains Old West artifacts and memorabilia.

The museum features certain time-limited exhibits throughout the year that speak to the rich cultural heritage of the American West but also boasts some permanent exhibits, thanks to generous supporters, Fox said.

“One of our permanent exhibits is the Spirit of the West collection, owned by the Abe Hays family,” he said. “It numbers over 1,400 works, which includes Western saddles of real historic importance, and cowboy gear, and other Old West objects, including the largest spur collection anywhere.”

The immersive exhibit gives visitors a real sense of place about the American West, Fox said, with multiple ways viewers can engage and interact with the artifacts, some of which are exceedingly rare.

The museum also helps tell the story of the Native American cultures in the Western states.

“We have 22 different Native American tribes in Arizona alone,” Fox said. “And we have one gallery right now devoted to the Hopi tribes in the northern part of Arizona. It features over 65 of, truly, the very finest examples of Hopi pottery spanning six centuries.”

The museum was gifted the pieces for the exhibit from The Allan and Judith Cooke Collection.

“Sponsored by the City of Scottsdale, the gallery honors the donor and his late wife, and the Hopi people whose tribal land lies in northern Arizona,” according to the museum website. “A national treasure, this collection serves as a point of pride for the City of Scottsdale and the state of Arizona.”

The museum also facilitates educational events featuring historians, storytellers, and performers, and other enriching activities for the City of Scottsdale.

While museums often have reputations as being static, contained institutions meant to document the past, Western Spirit: Scottsdale’s Museum of the West is impacting the surrounding areas and helping to shape Scottsdale’s future.

“We have a whole neighborhood revitalization program that is underway,” Fox said. “And what it includes will be two hotels, one of which is under construction as we speak across from the museum, and one will be contiguous to the museum.”

He said there are plans to build four new residential high-rise buildings in the immediate area as well, and the whole neighborhood is being rebranded as Museum Square.

The museum is undergoing a 30,000-foot expansion and is involved in a neighborhood revitalization project to reinvigorate the arts scene in the area.

“Included in that will be an expansion to the museum of 30,000 square feet,” Fox said. “Currently we have 43,000 square feet. Much of the additional 30,000 square feet will be hosting the Tim and Elaine Peterson Collection. It is early and contemporary Western art. It really is quite unique and striking.”

The expansion will also be home to The Rennard Strickland Collection, which Fox said is the largest assemblage of posters about the Western film industry in existence. The expansive collection contains more than 5,000 posters going all the way back to the 1800s and into the present day. The museum currently displays a portion of the collection, but the extra space will allow Fox and team to put many more of the posters on exhibit.

Community leaders in Scottsdale have shown enthusiastic support for the renovation project, believing the development will reinvigorate the arts scene — including the nearby Stagebrush Theater, Scottsdale Museum of the West, and Scottsdale Artists’ School — and bring more people to the area.

Scottsdale, with its Historic Downtown, is a Go-To Destination for American West Enthusiasts

Fox said the museum is just a portion of what makes Scottsdale a great place to visit.

“Historic downtown has been known for decades as a must-see experience because it has been so dedicated to civic heritage, and is an integral part of the region,” he said. “You know, the transformation of the American West has been seen in this downtown area, unlike in any other community here in the American West.”

He said that for decades, scores of highly respected artists and artisans have gotten their start in Scottsdale, whether it was Native Americans in the 1950s or 1960s or the contemporary artists of today. 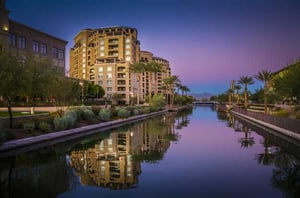 Fox said the museum is one of many reasons to visit Scottsdale, with its rich and diverse cultural heritage.

“It has really been recognized as a place where, you know, the diversity of people and their artistic expression are shared,” Fox said. “And, indeed with all of the scores and scores of galleries that we have, this historic downtown area has been a place for people — both residents of the region as well as people who have come to visit Arizona — to make a point of visiting Scottsdale.”

He said this rich history was also a major inspiration for building the Western Spirit museum in Scottsdale.

“Annually, we receive more than 9 million visitors coming in from all over the world,” Fox said. “And we believe many of them are wanting to have that sense of place, that sense of being in the West and to experience the West however they can when they vacation here. So, we try to be that place.”

Fox said the Western Spirit: Scottsdale’s Museum of the West is constantly seeking out, acquiring, and opening new exhibits.

“We have a great deal of changing exhibits and continuous new programming that’s offered to the visiting public,” he said. “We have a major new exhibit that will be opening in a year’s time that is called the Edward Curtis Exhibit of Photography.”

Fox said Curtis was one of the most renowned photographers of the American West, including documenting Native American cultures in the early 1900s.

“I can assure any visitors or prospective visitors that, when they come here, they will the quality of the work to be the very best of the American West,” he said. “And hopefully they’ll learn a lot about this region and all the explorations and other ways in which this region has evolved over decades.”