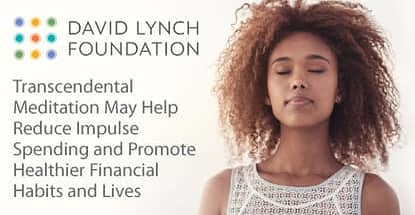 In a Nutshell: Everyone knows stress can kill, but it can also leave your finances on life support when tension turns to impulse shopping. Practitioners of Transcendental Meditation (TM) have long touted the technique’s health benefits, which include lower blood pressure and reduced stress, anger, and anxiety. Founded by the director and writer known for “Twin Peaks” and “The Elephant Man,” the David Lynch Foundation is a non-profit organization working to bring TM programs to schools and other institutions in underserved areas throughout the world. TM has already found a foothold as a stress reliever on Wall Street, and many believe a sound body and mind may lead to healthier financial choices among the general population. //

If you’ve ever felt stressed out about work, kids, or just life in general, you know how good it can feel to treat yourself to a little something extra. Splurging to buy yourself a new pair of designer leather shoes or some jewelry might not be in the budget, but it sure feels good. There’s just something positive about reclaiming a bit of control, and rewarding yourself for all of the hard work you’ve been putting in.

However, for some people, impulse spending can become a habit — and it doesn’t address the real problem of the stress you’re feeling. While it may be a quick fix to temporarily make yourself feel better, the credit card bills will eventually catch up with you, which can actually increase your stress level.

Scientific studies have shown a direct relationship between stress and impulsive behaviors like overspending. Of course, other negative behaviors contribute to spending too much, as well, but the common cause can be traced back to stress. With this in mind, it’s clear that controlling or eliminating stress from our lives can go a long way toward curbing these unwanted impulses. But how do we begin to control the stress?

For more than 50 years, millions of people around the world have turned to Transcendental Meditation, or TM, to reduce their levels of stress, and to deal with high levels of anxiety. People who regularly practice TM also find it brings a more positive state of mind and can provide relief from depression, addiction, and even post-traumatic stress disorder (PTSD).

Film and television director David Lynch, known for works that include “Twin Peaks” and “Mulholland Drive,” discovered the benefits of TM in 1973 and has practiced it twice daily ever since.

After seeing TM’s profound effect on at-risk populations, including children in inner-city schools and victims of violence, he started the David Lynch Foundation in 2005 to promote the practice’s benefits in alleviating stress and anxiety.

The question becomes can the results seen in reducing stress in these environments provide lessons for people coping with the stress caused by impulse spending? We recently spoke with Mario Orsatti, Executive Director of the Center for Leadership and Performance at the David Lynch Foundation, to find out.

“Transcendental Meditation is a technique to help your mind settle down,” Mario said. “Stress is a phenomenon that builds in us, and TM does something simple and effective to eliminate stress and to help our mind be more resistant to the negative influences of stress.”

The Real Effects of Stress on Our Financial Decisions

Scientific research has shown stress to be a factor in numerous impulsive behaviors, such as overeating, addiction, and, of course, impulse-buying. An explanation for this might be that we revert to lower-level thinking when we’re stressed, and are less able to access more rational and deliberative thoughts to help us make decisions. According to one recent study, 40% of consumers in the US consider themselves to be impulse shoppers. This comes at a time when stress and anxiety levels are at an all-time high.

TM may be able to help us overcome many of our irrational behaviors brought on by stress. In fact, Mario told us that he teaches TM in some of the most stressful situations anywhere — on Wall Street.

“As Executive Director of the Center for Leadership and Performance at the David Lynch Foundation, I teach TM at the largest hedge fund in the US, and, guess what? These people are under extreme stress,” he said.

The hedge fund Mario spoke of is Bridgewater Associates, run by Ray Dalio, who has practiced TM for more than 40 years. We couldn’t help but think that, if one of the most successful money managers in the world felt TM was good for his highly stressed employees, there have to be similar benefits for everyday folks.

What Transcendental Meditation Is … and Isn’t

TM was popularized in the US by Maharishi Mahesh Yogi during the 1960s. He taught the technique to many celebrities and artists, including The Beatles. At the time of the Maharishi’s death in 2008, TM had been taught to millions of individuals worldwide.

When we think of meditation, many of us probably imagine someone in white robes sitting in the lotus position and chanting for hours at a time. While this might be a type of meditation, it’s not how TM is practiced. Mario told us a little more about TM; and since he’s been teaching it since 1973, we paid close attention.

“The mind is like an ocean,” he said. “It has an active, conscious, thinking rhythm. Picture the surface of the ocean — constantly in motion, sometimes stormy. But that’s just at the surface. You can dive deeper, where there’s increasing calm and deep silence. That’s what TM does. It helps the mind to settle down, and that helps the body achieve a profound state of rest, in some ways more than twice as deep as deep sleep. This unique experience has been the subject of 50 years of scientific research.”

Mario told us TM is practiced just twice a day for 20 minutes at a time. This has been shown to be the optimal amount of time for the mind to fully enter its resting and orderly state, and to purge the accumulated stress.

“TM is a technique that requires personal instruction over time with a certified instructor,” Mario said. “Once you learn it, it’s completely effortless. Most people who practice TM do it twice a day for years. Why? Because it’s not hard to do and it produces many, wonderful, cumulative benefits.”

Can Transcendental Meditation Actually Save Me Money?

If eliminating stress by practicing TM can help our brains function better, it stands to reason it can benefit us in many areas of our lives. Thousands of highly accomplished people point to their daily practice of TM as a major factor in their success. Well-known scientific and research institutions have published papers touting the health benefits of TM.

If even part of these benefits can be achieved, think of the impact that would have on our lives. If practicing TM can eliminate enough stress to reduce overspending and make us more financially responsible, how much money could that save us? And how much is reducing stress for better health worth?

Each of us needs to consider these valid questions and their impact on our lives. The bottom line is research shows that TM helps reduce stress, and those who deal with stress in financially unhealthy ways may benefit. We’re the only ones who can decide how to proceed.