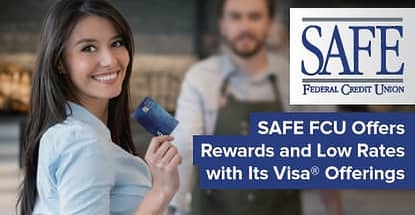 In a Nutshell: The old saying proclaiming that too much of a good thing can be a bad thing goes double for credit cards. While consumers want options when choosing a card to apply for, the availability of too many cards can create confusion. Most cardholders want rewards with low rates and fees — something SAFE Federal Credit Union offers with its two Visa credit card options. The Visa Platinum Rewards card sports a 12-month 0% introductory APR that stays as low as 10.49% after a year, while charging no annual fee and providing CURewards points on every purchase. The Visa Platinum Low-Rate card has the same introductory rate as its rewards sibling and rises to as low as 9.49% after 12 months. Both cards offer a 1.99% introductory balance transfer APR for the first 12 months of the account. //

Some financial institutions take a more-is-better approach with their credit card offerings and provide as many as a dozen cards for consumers to choose from. While options are nice, they can also be confusing with so many minute differences between them.

SAFE Federal Credit Union decided to take the opposite route with a less-is-more credit card strategy. The South Carolina based institution strategically chose two Visa credit cards to offer its members, each providing key benefits that are clear and easy to understand.

“Our whole goal is to bring simplicity to credit cards,” said Toby Hayes, VP of Marketing at SAFE FCU.

SAFE’s most popular offering, the Visa Platinum Rewards, starts off with a 0% introductory APR for the first 12 months, as well as a stellar 1.99% APR on balance transfers for the first year.

After the introductory period, the card’s regular APR increases to between 10.49% and 18.00%, based on creditworthiness — which is still very low for a rewards card. Every Visa Platinum Rewards card purchase earns rewards points cardholders can redeem for merchandise, travel, and cash back options through CURewards — all with no annual fee. 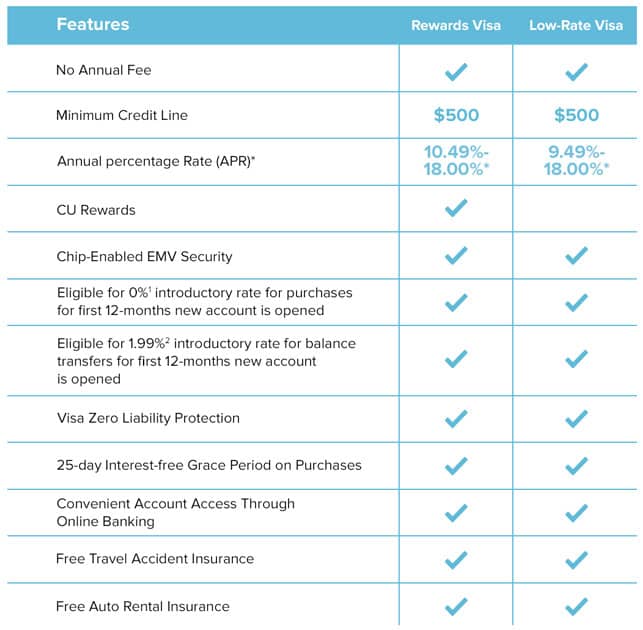 If rewards aren’t your thing, or you know that you tend to carry a balance from month to month, the Visa Platinum Low-Rate Credit Card may be a better choice for you. The card boasts all of the same introductory rates as its Platinum Rewards sibling, but the ongoing rate after that first year settles between 9.49% and 18.00%, based on creditworthiness.

The low-rate offering charges no annual fee. Both cards start with minimum credit lines of $500 and can increase up to a $15,000 maximum credit line with responsible usage.

Hayes noted that the offerings are so popular that 17.5% of existing SAFE FCU members have a credit card with the institution. The SAFE FCU mobile application also makes it easier to access an account and track card spending.

“We built a lot of the functionality of the desktop experience into our mobile application,” Hayes said. “One of our big pushes over the next year to two years is to build even more functionality into our cards. Our members have told us that they’d like greater functionality and we’re working to provide that.”

SAFE is the largest Midlands-based credit union, with more than 120,000 members and just over $1 billion in assets. The organization runs 17 branches in seven counties in South Carolina and gives members account access at thousands of other locations through the credit union shared-branch model. 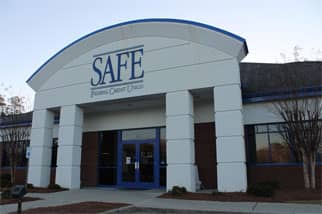 SAFE FCU is the largest Midlands-based credit union with more than 120,000 members and $1B in assets.

Membership is open to anyone who lives, works, worships, or goes to school in Sumter, Lee, Clarendon, Florence, Kershaw, and parts of Lexington and Richland Counties.

“Not everyone can be a member,” Hayes said. “When you do have the benefit of becoming a member, you have access to lower fees and tremendous accessibility. We don’t charge for a lot of the things that bigger banks charge for, such as balance transfers.”

Hayes noted that members often call the credit union to inquire about the cost of refinancing an existing loan to receive a better interest rate, which the credit union doesn’t charge for. He said those members don’t expect to hear that response.

“We have our members’ best interests at heart,” he said. “We try to do everything we can to save them money.”

Quarterly Surveys Help Members Get What They Want

Aside from lower fees and rewards possibilities, SAFE FCU takes its member-owned status to the next level by conducting quarterly member surveys to gauge how the organization is doing and what products and services its members would like to see offered.

“Over the last several surveys, the top thing that people have asked for is more user-friendly technology,” Hayes said. “We’ve really had a focus on that and are ramping up what we can offer our members, technology-wise.”

Those improvements will soon include new functionality for credit cards within the SAFE mobile application, as well as security-driven additions to debit cards to match upgrades already made for credit customers.

SAFE listened to its members in 2015 when it converted all of its existing credit cards over to EMV chip technology. The added security was so popular among cardholders that most asked for a similar transition for their debit cards.

“So, we’re starting an entire debit card conversion this summer,” Hayes said. “The switch to EMV chips on our credit cards will make this switch easier and still add a tremendous layer of security for our customers.”

SAFE’s attention to detail, and mission to give its customers what they want, are the reason the institution has grown steadily since 1955 to become the place South Carolinians turn to for secure deposits and value-added consumer products. While SAFE’s goal is to keep its credit offerings simple, the low rates and rewards offerings are anything but small.

How MWCUA Fights for the Rights of Credit Unions & Their Members