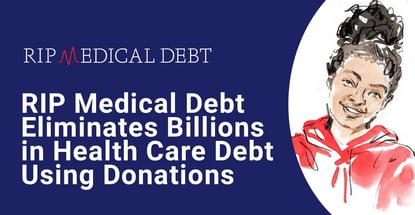 “At the time I received your letter I was feeling down & defeated. Then your letter came. All I could do was say WOW WOW WOW.”

“I was going through the worst year of my life when this letter showed up. I found a little hope in the darkness.”

“Life has hit us with some hard blows mentally, spiritually, and financially. Opening your letter to find that my medical debt has been paid in full, I will never forget. You have truly blessed our lives with your generosity, compassion, and love.”

These are just a few of the genuine responses from recipients of RIP Medical Debt’s life-changing work. The nonprofit purchased their medical bills and the debt of millions of others to provide them relief from the constant stress debt brings.

RIP Medical Debt finds the debt that would make the most impact in a person’s life and focuses its funds and resources to pay it off. The nonprofit said these families incurred the bills through no fault of their own and should not have to face financial ruin as a result. Medical debt is cited as the number one reason most Americans file for bankruptcy.

RIP Medical Debt has so far relieved nearly $7 billion in medical debt. The organization runs on donations from the community. And by cashing out credit card rewards, anyone can use their hard earned rewards to contribute to settle medical debt from healthcare systems and the secondary debt market.

RIP Medical Debt’s two founders, Craig Antico and Jerry Ashton, used to work for debt collection agencies. After decades of learning the industry, the pair realized they could make a difference in helping the families they were trying to collect from.

Antico and Ashton were spurred by the Occupy Wall Street movement and created RIP Medical Debt in 2014. The nonprofit uses donated funds to buy debt in large bundles. Then it sends letters to those who had their debt bought out, telling them they do not have to worry about the debt anymore with no tax or credit consequences.

“The emotional and mental burden that people have from owing medical debt is substantial,” RIP Medical Debt Director of Development Scott Patton said. “What is uniform to all of the folks who reach out to us is how happy they are that something like this is happening in the world. They might have shoeboxes full of medical bills, and knowing that one is gone lifts a tremendous load off for these folks.”

Medical debt is creating a new epidemic of sick people who do not go to the doctor because the fear of receiving a bill they cannot afford outweighs that of getting help. Patton told us many of the people the nonprofit organization helps would not go back to a doctor even if they were sick because they couldn’t handle the bills.

RIP Medical Debt wants to be the solution and eliminate that stigma, especially as the country starts emerging from the COVID pandemic. But, it cannot buy debt without funds.

RIP Medical Debt currently focuses on buying the debt of people who are at 400% of the poverty level or below. The nonprofit recently raised its qualification from 200% as more people are in financial need more than two years into a pandemic with rising inflation.

The nonprofit works with individual donors, including philanthropist MacKenzie Scott, who donated $50 million to the cause in 2020.

RIP Medical Debt works closely with TransUnion, one of the big three credit reporting bureaus, to identify areas in the country where medical debt is affecting the most people. The nonprofit then focuses its efforts on eliminating debt for those people.

“RIP Medical Debt allows donors to actually participate in the process and make donations,” Patton said. “We use those donations to buy the medical debt just like any debt buyer would for pennies on the dollar, literally.”

The Process for Buying Debt for Pennies on the Dollar

RIP Medical Debt has historically focused on what’s called the secondary debt market to acquire debt from collections agencies that want to offload their responsibility. This is the market where debt that has been defaulted on is sold. Think unpaid medical bills, personal loans, or utility bills.

More recently RIP Medical Debt has been purchasing medical debts directly from hospitals and doctors’ groups looking to recoup any money from an unpaid bill without subjecting former patients to stressful collection practices. The debt is bought at a deep discount.

Once debt is purchased and forgiven, there is no further work required by the recipient. Recipients do not have to pay any tax, and all derogatory marks on the person’s credit report are wiped away. Relief is random and people cannot unfortunately request help with medical debts; the nonprofit is limited by those institutions which are willing to sell or donate their qualifying medical debts.

RIP Medical Debt does not receive any money from the government, instead it relies solely on donations. As a result, the nonprofit offers flexibility on how a person’s donations are used.

“If you’re a debt buyer and collector, your model is purchasing the debt and then collecting on it to maintain revenue,” Patton said. “If you’re relieving the debt, you lose that revenue stream. That’s what brought about the nonprofit model that focused on contributed revenue.”

People can donate to the nonprofit’s general fund, or to the many campaigns started by others. These campaigns focus on specific areas and provide donors the ability to make an impact directly in their town and help their neighbors.

For people looking for their dollar to stretch the furthest, donating to the general fund is the best option. RIP Medical Debt uses the money donated to the fund in places where it can make the most impact.

The nonprofit also promotes its group of monthly donors known as The Medical Debt Relief Alliance. Each month, members make a small donation based on their budget and RIP Medical Debt uses the money to provide debt relief to families across America, invest in infrastructure to eliminate more debt, and elevate awareness of the medical debt crisis nationwide. Members receive a quarterly report that shows exactly how much debt was bought using your dollars, where it was bought, and the average face value of each account.

Today, millions of Americans face a total of $140 billion in health care debt. For many, that debt represents unaffordable bills that can never be paid off.

One issue many don’t realize is that those who can’t afford costly medical bills also cannot afford bankruptcy. Bankruptcy requires hiring lawyers and paying expensive filing fees. On average, a bankruptcy can cost anywhere between $1,500 and $4,000.

Even with insurance, some patients are not able to afford expensive copays. RIP Medical Debt said that, as insurance companies cover less and businesses buy cheaper coverage for employees, patients still have huge out-of-pocket costs.

RIP Medical Debt knows buying medical debt is not the only way to prevent financial ruin from hospital bills. The only way to stop it is to enact change in the healthcare system.

RIP Medical Debt is currently developing an arm of the nonprofit to create solutions. That arm will work on the policy side to influence and craft laws that make health care more affordable, such as supporting laws that are a net positive to patients in hospitals and doctor’s offices.

“We are highlighting issues and will eventually provide support for policies on the ballot that benefit patients,” Patton said. “I think that if you were a patient, which means you are a human in the United States, that you could get behind the policies and issues we want to highlight and support as time goes by.”

Bills.com Helps Americans with Options for Getting Out of Debt

How Consolidated Credit™ Can Help Reduce Your Credit Card Interest