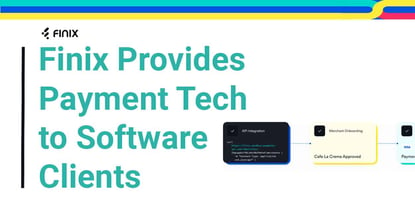 In a Nutshell: Businesses that require APIs for payment processing tend to enlist providers that use a locked architecture, and thus limit their versatility. Finix is a payment facilitator and SaaS provider that offers customizable platforms to help clients achieve a better product experience and faster speed to market. Finix offers both card-present and card-not-present transaction capabilities for platforms of all sizes. It can also run real-time fraud detection for merchants that use Finix’s JavaScript for secure tokenization.

Payment processing isn’t a cut-and-dried operation. It can be an arduous task for companies looking to create seamless payment systems for their customers. And it often entails building technology that takes years to develop in-house by many engineers and millions of dollars invested in R&D.

That’s usually why a large number of businesses go for the standardized payment processing established by API providers like Stripe and Plaid.

But instead of conforming to the industry standard and compromising effectiveness, companies have the option of working with Software-as-a-Service (SaaS) providers that can offer customized solutions.

Finix is a payment facilitator and SaaS provider that was founded in 2016. Its customized payment solutions can reduce R&D time to months rather than years and enable developer-friendly APIs to start monetizing payments as soon as possible.

Finix also functions as a payment facilitator, providing back-office requirements and compliance certifications so its customers can get up and running in no time.

The SaaS provider has two operational models. It can act as the facilitator, in which case Finix is the payback channel and the registered entity with the banks. And over time, a client may also become a payment facilitator and be able to use Finix’s platform, if they choose to do so.

Finix’s Chief Growth Officer, Jareau Wadé, said that if clients want to become facilitators, they need to get their own sponsorship, but would still use the same set of APIs and the same platform that Finix provides.

“Some things need to be changed on the back end, but there’s no token migration and all the merchant data is still there,” said Wadé. “You’re essentially massively decreasing your switching costs in the future by working with Finix from day one.”

Banking For the Future

Finix applies a customer-friendly approach to its operations and encourages greater engagement among its clients in developing the best payment processing platforms.

The company doesn’t discriminate against its customer base in terms of size and works with clients and software platforms who have anywhere from zero dollars to billions of dollars in processing volume.

This flexibility enables customers to get a better product experience and faster speed to market, and allows Finix to take on the nontechnical aspects of monetization and payment collection.

Finix also offers both card-present and card-not-present transaction capabilities for platforms of all sizes.

Wadé said that, because there is now a whole generation of APIs that have been developed, the SaaS platforms are building all the features and the functions for payment processing. “The SaaS platforms are providing financial services for the merchants and the consumers, and those are really the banks of the future.”

He said that the industry is currently seeing a continuation of what’s been happening for decades. To put it in simpler terms, Wadé compared the different types of payment processes to making a pizza, or “pizza-as-a-service.”

Based on Wadé’s explanation, there are four different ways to eat pizza. One is dining out, which requires as little work as possible by the consumer to prepare the pizza. Another is ordering delivery, and then there’s baking a premade pizza at home. And the last is making the pizza at home from scratch.

“You actually have a similar breakdown within how software platforms can consume payments right now,” said Wadé.

“So there’s the ISO model. This is a historical model that has existed for the last two decades or so,” he said. That model entails boots on the ground, selling ATMs and then taking a residual cut from that. “But the idea is that there is some integration in the modern version with large value-added resellers and software companies where there’s a payments form integration so that you can do checkout.”

But the trend over the last decade or so is that the facilitators, like Finix, have become the payfac – as in delivering the pizza. “We’d outsource both the payment forms and the merchant onboarding and then the payouts. This is the model that Finix is doing today,” said Wadé.

“We also serve as the third model, which is, we are the software enablement partner that connects you to say, a WorldPay, then you become the payback and you can take on more responsibility, you get better rates, more control, and more finely tuned fraud models to your specific vertical,” Wadé explained.

With the third model, the client is still baking the pizza at home, so to speak. In contrast, the fourth model is soup to nuts, where everything is made from scratch. “You build the software, you have the integration, you have the relationship, you have the compliance, and everything is done in-house with your payments stack,” said Wadé.

“This isn’t a common model anymore because there’s so much opportunity where companies like Finix are serving two ways where you can get started early and then grow into this.”

Finix is a PCI DSS level 1 compliant company and is also SOC1 and SOC2 compliant. What that means for Finix’s products is that customers can use the gateway and be able to tokenize card information. Apple Pay and Google Pay can be used as an alternative payment method because they provide additional security biometrics.

To improve security and conversion rates, Finix uses an account updater implementation to allow automatic access through secure channels with its banking partners.

With the alternative, a consumer would have to key in that information when prompted, which can obviously lead to lost sales and customer experience as some customers may not bother or enter the wrong information into the form.

Wadé said Finix uses other safeguards as well. “We’ll have trend data when it comes to risk vectors. So if we see card and IP address matching popping up at different merchants or even within the same merchant…we can see in and protect against that. It’s usually for security and anti-fraud measures rather than marketing intelligence.”

New Advancements on the Horizon

The company recently raised an additional $30 million in working capital. It marks Finix’s continued effort to be the best option for consumers.

Finix also had a Q3 product release that relates to its developer tools, dashboard and reporting. “A couple of things, we called out where we can do buyer fees,” said Wadé.

What some consumers may not be aware of is that there are codified rules about how a merchant can present convenience fees or even rental fees if collecting rent payments off a credit card. “And so Visa and MasterCard have now made these rules, kind of known as the standard,” said Wadé. “And so we’re helping our platforms bring that to the merchants by allowing that functionality.”

Finix is now allowing customers to do blended or interchange plus where Finix would advise them to get the address information because they will qualify for lower rates. “We added some functionality to our code migration process where now you can take your tokens sent from Stripe, hand us a file of addresses linked to those previous tokens, and we’ll merge them for you as we put them into our vault,” said Wadé. “And then going forward, you’ll qualify for lower rates.”

“The fact that we’re getting this type of granularity is really cool, because this is where you get to unlock some savings, building functionality and kind of help our customers really scale and succeed,” said Wadé.