350.org Discusses the Banks Funding the Dakota Access Pipeline & How Consumers Can Help Keep Fossil Fuels in the Ground 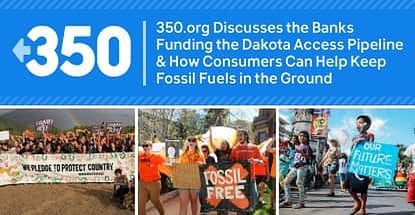 In a Nutshell: In just one year, the U.S. consumed more than 1.1 billion metric tons of petroleum products. That’s billions of barrels of oil and other dangerous fossil fuels burned — and tons of toxic hydrocarbons released into the environment. As fossil fuel education improves, citizens around the world are calling for change — and 350.org is helping them bring it about. The current focus of the war on fossil fuels is the fight to stop the completion of the Dakota Access Pipeline being developed by Energy Transfer Partners and Sunoco Logistics in the mid-western U.S. Protesters have gathered across the country to make their voices heard, and they’re hitting the companies behind the pipeline where it hurts — in the pocketbook — by going after the 38 banks providing the financing. In what has been called a global movement, consumers are calling for the divestment of oil and gas infrastructure funding — and an end to investment fossil fuels. //

In 2015, an estimated 7.08 billion barrels of petroleum products were consumed throughout the U.S. — that’s around 1.1 billion metric tons of oil and fuel used in a single year.

The U.S. has one of the most extensive networks of oil and gas pipelines in the world, with more than 2 million miles of pipe on and under the ground across the country, all being fed by thousands of oil and gas extraction sites around the U.S.

Unfortunately, the features that drive our dependence on petroleum — namely, it’s easy combustibility and high energy content — are the same features that make it exceedingly dangerous to use and even obtain, whether that be extracting it from the ground or transporting it across the country.

As the public becomes increasingly educated about the realities of fossil fuel use and its effect on public safety and environmental quality, there has been a growing awareness of the need to stop the production of, and dependence on, fossil fuels for energy. 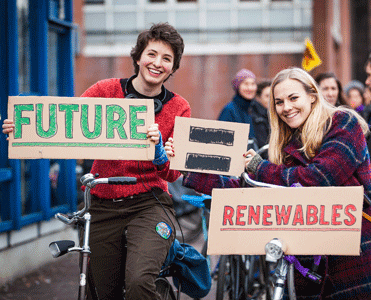 As awareness of the perils of fossil fuel production and use grows, there has been an outcry for alternative energy sources.

“In order to actually keep a livable planet, we have to keep temperature rises below 1.5 degrees, and we know, to do that, we need to keep the fossil fuels in the ground,” said Sara Shor, the head of fossil fuel activist group 350.org‘s Keep It In the Ground Campaign, which, as the name suggests, is focused on eliminating the extraction and transport of fossil fuels.

One of the latest targets for the campaign has been the highly controversial Dakota Access Pipeline being built in the Midwestern U.S. by Energy Transfer Partners and its pipeline cronies, Sunoco Logistics and Energy Transfer Equity. The pipeline, which has been nearly completed, runs 1,100 miles across Iowa, Illinois, and the Dakotas, and is expected to carry 500,000 barrels of oil a day.

The Dakota pipeline has seen heavy protest, not just by environmental activist groups, but led by thousands of Native Americans. They’ve gathered in support of the Standing Rock Sioux Tribe whose lands border the pipeline’s route and who argue the pipeline will affect their main water supply, Lake Oahe.

On November 15, more than 35,000 people protested against the Dakota Access Pipeline.

On November 15, Indigenous Environmental Network, Honor the Earth, 350.org and dozens of other groups organized over 200 events across the U.S. drawing more than 35,000 protesters demanding President Obama step in and stop the pipeline. The protests targeted offices for the Army Corps of Engineers (who are responsible for permitting the construction under the lake) as well as many of the banks known to finance the pipeline and the companies behind the project.

The 38 Financial Institutions Financing the Pipeline

According to a report put together by Food and Water Watch, 38 banks are responsible for providing funding to the three main companies with stakes in the pipeline. Seventeen of those banks are directly financing the Dakota Access project — and Citibank is leading the charge.

“Citibank is the bank that’s been running the books on the project, and that’s the bank who beat the bushes to get other banks to join in,” said Hugh MacMillan, one of the authors of the report. “They have the largest share, and they’ve spearheaded the effort.”

This graphic from the report by Food & Water Watch shows the various sources of funding going into the companies behind the Dakota Access Pipeline or who are banking on its profitability.

“They’re banking on this company and banking on being able to drill and frack for the oil to send through the pipeline over the coming decades,” Hugh said, describing the banks’ investments in Energy Transfer Partners. “I think it’s important to see the forces behind this pipeline as the same forces behind numerous other pipelines across the country.”

How You Can Affect Change — One Bank Account at a Time

While it may seem like an impossible task for the average citizen to affect the way a giant financial institution invests, Sara says there are a lot of ways people can make an impact on our fossil fuel future. On top of the more traditional protests like those on November 15, social media — and the internet in general — has made a significant impact on the fight.

“What we’ve seen as being incredibly effective is people putting pressure on banks’ brands,” she explained. “Things such as publicly associating their brands with projects like the Dakota Access Pipeline can be incredibly destructive.”

Especially here in the internet age, social pressures can have a huge impact on a brand’s image, and, as we all know, image is everything. Well, almost everything — there’s also the money.

Environmental groups are among those behind the growing movement demanding that large institutions divest their investments in fossil fuel production and infrastructure. Everyone from college students to faith leaders have been calling for disinvestment of fossil fuel funding, and more than 40 cities around the world have committed to divest.

People around the world are calling for fossil fuel divestment by major institutions.

As a tactic, disinvestment has a lot of potential — particularly when it’s targeted at those who make their money from your money.

“A lot of organizers on the ground have called for people to take their money out of these banks, and that is something that’s happening in full force,” said Sara. “We’re seeing people take their funds out of large banks funding the pipeline, and put them instead into credit unions and community banks.”

According to Sara, one of the more challenging aspects of the disinvestment movement is the difficulty of tracking the money. “It’s actually quite hard to figure out,” she said. “There are commingled funds, and funds that house multiple kinds of investments.”

350.org and other groups are also fighting from the other side of the money, hoping to discourage companies from investing in fossil fuel projects by taking the profit out of them.

“We’ve seen a lot of stranded assets — banks and companies investing in fossil fuel projects that get canceled or delayed so much that they’re actually not profitable,” described Sara. “We’ve seen dozens of different projects canceled over the last year, so these are becoming riskier investments.”

She says a major force in the delay and cancellation of projects has been due to community involvement as well as groups like 350.org.

A rise in fossil fuel activism has led to a growing number of project delays and cancellations, increasing the risks of fossil fuel investment.

“We’re seeing a huge rise in activism, and that’s delayed projects,” she explained. “From projects in Canada around the tar sands, to coal projects across the U.S., to coal projects in Australia, to pipeline and export facilities along the U.S. coast — a lot of these projects are being delayed or stopped because of activism.”

Sara gives a lot of the credit to the work of the indigenous peoples of the respective countries, such as the Native Americans protesting the Dakota pipeline. However, it’s not just those directly impacted by the projects who are making a difference.

When it was made public that Norway’s largest bank, DNB, had financial ties to the companies behind the Dakota pipeline, the citizens of Norway reacted. Led by the indigenous Sami people of Norway, thousands campaigned and signed petitions to have the bank divest their interests in the project and the companies behind it, causing DNB to release a statement saying they were reconsidering their investments.

“The banks need to be looking at the future,” said Sara. “If banks are going to support a livable future, they cannot fund any new fossil fuel infrastructure.”

While the Dakota pipeline may be a relatively small portion of a million-mile long fossil fuel problem, it has quickly become an icon of the fight against fossil fuel development. Every international summit on climate has come to the same conclusion: we need to do something about fossil fuel dependence, and we need to do it fast.

350.org is an environmental group with global reach, dedicated to stopping the production and use of fossil fuels.

“This is a global movement of folks who are standing up against fossil fuel expansion,” said Sara. “There’s a movement, getting stronger and stronger that will continue to challenge these companies and projects. People should know that when they’re investing their money and avoid investing in fossil fuels.”