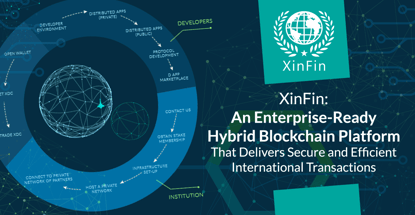 In a Nutshell: Blockchain technology allows parties to transact seamlessly and securely anywhere in the world, but blockchain networks have had problems with reliability and performance that have slowed their mainstream adoption. XinFin aims to solve those issues with a hybrid architecture that combines the transparency of a public blockchain with the security of a private network. The platform’s consensus mechanism speeds the process of validating network transactions and delivers the safety, efficiency, and usability necessary to make the blockchain enterprise-ready.

Globalization of commerce has increased access to opportunity and prosperity for billions of people. But because it relies on legacy trade and financial systems to handle transactions, commerce is often less than efficient.

Banks, payment networks, money transfer services, and other financial intermediaries slow exchanges and drive up costs, while regulations add layers of redundancy and incompatibility — especially across borders. For all its successes, the global financial system is often too expensive for entrepreneurs and small businesses in many developing industries.

That’s one reason why blockchain technology has generated so much excitement since it burst on the scene with the advent of Bitcoin in 2009. But so far, it has failed to break into the mainstream.

That’s due, in part, to the process used to verify blockchain transactions. It isn’t fast or affordable enough to outperform traditional systems — yet. And some blockchain networks have proven vulnerable to hackers and speculators.

XinFin was created to solve those issues and bring blockchain transactions closer to mainstream adoption. Financial enterprises want to leverage the technology to deliver services more efficiently, but blockchain technology first needs to prove it is more reliable than legacy infrastructure.

XinFin helps enterprises expand the reach of global trade and finance with a secure hybrid blockchain architecture and a more efficient method for validating transactions.

“We have a network that can interoperate with legacy systems and get them to work seamlessly across layers and borders,” said Atul Khekade, XinFin Co-Founder and Head of Ecosystem Development. “And yet it can provide a very instant settlement for whatever instrument parties set up between themselves.”

XinFin combines security and transparency to create a solution that helps businesses benefit from blockchain transactions, and it removes some of the most significant barriers to adoption that the technology faces in global commerce.

A first of its kind hybrid architecture connects the power and transparency of XinFin’s public blockchain with the security and speed of a private network. Established as an outgrowth, or fork, of the widely used Ethereum network, XinFin accomplishes its goals through its own Ethereum-compatible XDC cryptocurrency token and its XDC01 protocol.

The public network allows users to communicate and share basic data securely and transparently across the entire ecosystem. Any group of network participants — including a group of nodes controlled by an enterprise — can then deploy its own private state. These private networks can protect sensitive financial data from exploitation, and they are permissioned, meaning that members decide who gets in and whether particular sets of transactions can be kept private.

The XDC protocol works as a messaging and confirmation layer for domestic or cross-border-approved payments, and the XDC token functions as a payment and settlement layer, supported by approved financial institutions.

XinFin’s robust community of more than 12,500 outside developers ensured the viability of the public network through hack-a-thon events and many rounds of testing.

“Because of our hybrid architecture, we are secure in two ways. Our most critical data points are not on the public network for people to come in and see them. That’s what makes XinFin enterprise-ready,” Khekade said. “And the public network has been through a lot of testing from our community members, and we encourage more people to come in and do that to make us even more secure over time.”

Early blockchains like Bitcoin and Ethereum used a consensus mechanism known as Proof of Work (PoW). The PoW model depends on network participants, called miners, to compete with each other to solve a cryptographic puzzle that proves the transactions recorded in a data block are genuine. Miners are incentivized by the cryptocurrency rewards they earn for their work.

But computers fast enough to win those competitions are expensive to deploy, not just because of the hardware but also because it requires a large amount of energy. What’s more, security rules on PoW networks result in low transaction throughput.

That’s why XinFin uses a consensus mechanism based on Proof of Stake (PoS). In PoS, block creators are chosen by an algorithm based on cryptocurrency they deposit, or stake, in a special network account. Rather than rewards, PoS block creators earn set fees when they validate.

XinFin takes PoS a step further by concentrating block creation in the hands of validators that receive permission to do the work. They do so by earning votes weighted by the amount of XDC each voter has staked in the system.

Because creators can be voted out and lose their stakes, they’re encouraged not to exploit the network. And because the number of creators is kept low as a result of the election process, throughput is much higher, and the computing power needed to accomplish validation is much lower.

“That gives the network a really strong power for people to trust it and to transact over it,” Khekade said.

And XinFin gives users even more power through TradeFinex, an open-standards protocol for global trade and finance. Its robust tools enable creation, management, and liquidation of bond instruments and invoices, with additional functionality coming soon. TradeFinex has already demonstrated its ability to facilitate infrastructure investments in developing regions.

XinFin set out to build a blockchain network that puts the power in the hands of transaction participants — especially those in developing regions — and the enterprises interested in reaching them. According to Khekade, blockchains erase arbitrary boundaries between financial services providers and the people who need those services.

“Our solution works most effectively across borders. This makes sense because, at the national level, trust is pretty much there and laws are well defined,” Khekade said. “If you’re paying in the United States, you’re paying in U.S. dollars. But when it comes to cross-border, it’s very flexible how people can pay. That’s why our solution is international to start with.”

XinFin goes beyond a blockchain network to offer an ecosystem of ready-to-deploy APIs and decentralized apps (dApps) that demonstrate its ability to support widespread enterprise adoption.

By integrating with legacy systems and expanding access to a global pool of funds, capital costs decrease. At the same time, financial providers and suppliers gain access to additional markets.

Each XinFin transaction avoids the lag and expense involved in exchanging fiat currencies or using third parties to accede to agreements between buyers and sellers.

How Byteball Could Disrupt the Current Crypto Fee Market