Green Energy on the Blockchain: WePower is a Renewable Energy Trading Platform Connecting Buyers and Producers while Saving Money and Time 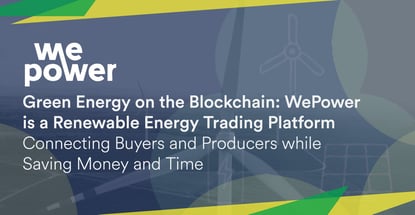 In a Nutshell: The renewable energy sector offers promising alternatives to depleting fossil fuels, but the industry still suffers from certain inefficiencies, including slow contract processes and high costs. WePower is addressing these issues with its blockchain-based platform that connects renewable energy buyers directly with renewable energy producers. Think Uber, but for electricity. The company also makes it simpler for producers to raise capital via smart contracts technology. WePower launched its public beta test in Australia earlier this year and has its sights set on the U.S., European, and Asian markets in the coming years.

The renewable energy ecosystem is on the rise, and like most nascent industries, it is evolving as refinements, improvements, and standardizations are implemented.

As a renewable energy developer, Nikolaj Martyniuk identified a number of issues causing the process of creating and implementing contracts between renewable energy producers and buyers to be cumbersome and costly.

Martyniuk, along with Co-Founder Kaspar Kaarlep, came up with a way to address these problems in WePower, a green energy financing and trading platform based on blockchain technology.

We recently had the opportunity to speak with WePower’s Chief Marketing Officer, Gytis Labašauskas, about the world of renewable energy and how WePower is working to solve some of the industry’s growing pains.

“Banks are requesting a higher share of capital from developers’ funds, which creates bottleneck issues for a new developer,” Labašauskas said.

Prior to getting a bank’s approval for development loans, the developers must secure future cash flow in the form of power purchase agreements (PPAs), he said. PPAs are agreements between energy producers and corporate buyers that say the buyer will buy energy for a fixed price for a certain amount of time.

“These negotiations usually take anywhere between a year and three years,” Labašauskas said. “And it costs a lot for both parties — up to $1 million or $2 million in legal fees, structuring fees, and consulting fees.”

“The current system of how renewable energy is financed and purchased by corporations is absolutely inefficient and will soon run out of big companies that have balance sheets big enough to go into these contracts,” Labašauskas said. “So, this is how the WePower idea came to life.”

“WePower connects energy buyers (end users and investors) directly with the green energy producers and creates an opportunity to purchase energy upfront at below-market rates,” according to the company website.

Direct access to renewable energy producers gives buyers more control and greater choice over where their electricity comes from, according to the company. 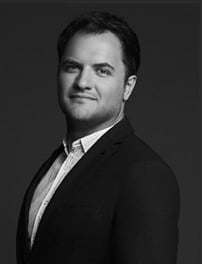 Gytis Labašauskas is the Chief Marketing Officer at WePower.

“WePower’s platform is a one-stop shop solution that provides your company with tools to help you understand your electricity consumption patterns, find a best fit renewable electricity producer, contract with them digitally and then monitor generators as they are built and start generating electricity,” according to the company website.

And WePower also provides for more transparency when it comes to numbers.

“Our blockchain-based production accounting solution allows you to account for every unit of electricity produced by a generator with trust and ease,” according to the website.

WePower’s standardized and accessible process also allows smaller companies with lower electricity needs to be aggregated with larger companies or with other small organizations. This practice creates a more inclusive marketplace where risks and opportunities can be better managed, according to the company.

Labašauskas said this approach is much better than current structures, which favor larger companies and lock both parties into lengthy agreements. WePower’s method allows for much more flexibility, which benefits the companies and the industry as a whole.

Speaking of agreements, the company’s proprietary blockchain-based Smart Energy Token solution enables direct trade of power purchase agreements between platform users. Again, providing a level of flexibility that no other energy products have been able to provide, according to WePower.

said that, since the contract process is one of the main bottlenecks in the renewable energy industry, it makes sense to standardize how companies discover and choose projects. This also means facilitating readymade and flexible smart contracts.

“With the WePower platform, renewable energy developers can secure easier financing by selling part of their energy production capacity directly to the corporate energy buyers,” according to the website. “This is done in the form of digitally enabled PPAs, which are powered by our unique Smart Energy Contracts technology.”

The contracts represent the capacity of production that a power plant anticipates in its future and how energy will be distributed among its clients. The contracts can be used to offset energy bills, sold into the energy wholesale market, or traded.

“This is a radical new approach to energy procurement,” Labašauskas said. “We tend to say that, for corporate energy procurement, we’re doing the same thing that Uber did for ride-hailing. It was a market dominated by taxi companies with huge regulations, and they basically allowed a bunch of new players to enter the market.”

He said WePower has also become involved with a number of cleantech startup accelerators around the globe.

In early 2019, WePower launched its first public beta test in Australia. And why, exactly did an Estonia-based renewable energy company look nearly halfway around the world to kick things off?

“Australia has perfect natural conditions for renewable energy production: solar and wind resources are amongst the best in the world, public sentiment towards renewable energy is fantastic, and the federal and state governments are actively supporting the rollout of renewable technologies,” according to the WePower white paper.

Labašauskas said there is also a real need for the development of renewable energy and corporate procurement because energy prices in Australia are extremely volatile.

WePower has established a number of strong partnerships in Australia with companies that can help further its goals.

“StartupBootcamp’s cleantech accelerator program opened up a compelling opportunity for WePower to launch operations in Australia,” according to the WePower white paper.

The company relayed that over the course of three months, it managed to launch the WePower platform, version 1, define a business model for the Australian energy market, and work with major partners, including Energy Australia, the country’s leading gas and electricity retailer. It also partnered with TFS Green, a subsidiary of Tradition, one of the world’s largest interdealer brokers.

“We now have a number of developers that are ready to sell their energy in Australia,” Labašauskas said. “And we are talking to a number of companies that would be willing to be the first ones to participate in an energy auction as a — quote, unquote — test rabbit because nobody has done this before to standardize energy procurement.”

He said the potential now exists for companies to save up to 40% of their energy costs by buying directly from renewable energy producers.

WePower is also looking at the U.S. as a future market, and then Europe and Asia.

“The U.S. currently has about 80% of the market share in terms of volume of PPAs,” he said. “So, U.S. companies are extremely keen and experienced in procuring their energy directly.”