How an iTestCash Device Can Help Protect Businesses from Costly Situations 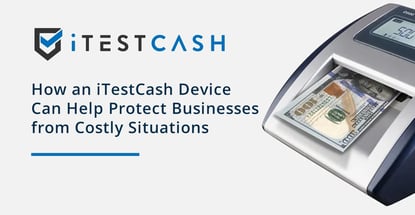 According to the United States Department of Treasury, $70 million in counterfeit bills are in circulation, or 1 counterfeit note for every 10,000 genuine notes. With so much money floating around, counterfeiting remains a real threat to businesses and individuals.

iTestCash is a leading manufacturer of counterfeit detection and money handling devices. Its customer base includes retailers and grocery stores, venue halls, restaurants, banks, and anywhere else money is exchanged. The company also supports education on how to detect counterfeit currency and coins.

With or without help from detection devices, retailers must guard against counterfeiting because there is no recourse except to take a tax deduction on the lost amount.

“Scrutinize all your bills or use a machine that tells you on the spot if money is fake or not,” advised Alex Reichmann, CEO of iTestCash. “I think that’s important for any business dealing with cash from the standpoint of taking the money and making sure it’s real.”

iTestCash has roots in Dri Mark, a manufacturer of counterfeit detector pens. Alex Reichmann’s grandfather invented this type of device, which has played an important part in protecting companies from money fraud. 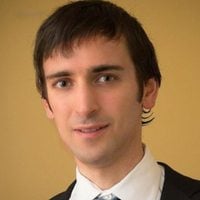 “My parents owned Dri Mark, which patented the counterfeit pen in the United States,” explained Reichmann. “So back in ’07, iTestCash started as one of the first sellers of the counterfeit pen online. And we evolved from that idea to be an all-in-one online counterfeit detector shop that businesses could rely on.”

Although the company greatly expanded its product line, iTestCash still markets counterfeit pens, which remain a perennial bestseller. These pens are a low-cost solution for businesses that want to test the bills for authenticity.

The technology is reliable and simple: You mark the bill and look at the color. If it’s clear of light amber, the paper is good. A dark brown or black mark indicates counterfeit paper. While this will catch bad paper, it won’t detect real bills that have been bleached and reprinted as a higher denomination. This is one reason why businesses often opt for more sophisticated equipment.

There are many ways to spot a counterfeit bill. If you suspect a bill is a phony, inspect it carefully. Bear in mind that certain series of banknotes have different images and features, depending on the year it was printed.

“The biggest dead giveaway of a lower-quality counterfeit bill is that the paper feels funny,”, said Reichmann. “It’s happened to me. It helps to first feel a real dollar bill. Then feel the suspect banknote. If it feels extra thick or flimsy, that can be a red flag.”

Banknote paper is made from cotton pulp, which gives it a distinctive feel. Under UV light, the paper has a dull sheen.

The paper has a distinctive watermark that you can see when you hold the bill up to the light. Often, the watermark resembles the printed portrait. It’s hard for counterfeiters to get the watermarks perfect.

The paper has embedded threads that may exhibit a starburst pattern. If you look at the bill sideways, the threads may weave through the paper. Under strong light, the threads always produce a solid line.

Other aspects of a bill to inspect include:

If the bill turns out to be counterfeit, your options are few.

“There might be some way to write it off as a loss. That’s the best-case scenario,” said Reichmann. “It’s generally recommended to call local law enforcement just in case there’s an investigation going on. They might tell you to tip off the Secret Service because sometimes, with counterfeit money, there might be trails that lead to the counterfeiter.”

Excellent quality counterfeit detectors are not very expensive and are available from iTestCash for less than $250, albeit without advanced counting and sorting capabilities. Top multifunction machines can cost up to $2,000.

The detector should spot fake bills, even top-quality fakes, in seconds. Machines help businesses stay one step ahead of the counterfeiters, who are continually improving the quality of their fake currency.

The detectors rely on UV light to spot a missing watermark or security threads. In addition, these devices can include optical density detection, color spectrum analysis, and infrared/magnetic scanning of security marks and magnetic ink. 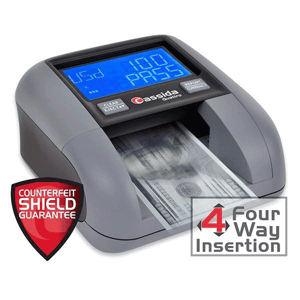 One top-quality detector sold by iTestCash is the Cassida Quattro 4-Way Automatic Counterfeit Detector. The device uses magnetic and infrared detection technology to quickly identify bad bills. The built-in screen indicates whether a bill passes or fails, and how many bills were counted, by denomination. It can work plugged in or on battery power and is a good choice for any business that deals with a lot of cash.

If you accept multiple currencies, you may prefer the Safescan 185-S Multi Direction Counterfeit Bill Detector. It can scan eight different currencies, including banknotes from the United States, Canada, and the European Union. The machine can count the money as it’s checking the bills, which can be inserted in any orientation.

Another top machine is the Accubanker D585 Multi-Scanix Counterfeit Bill Detector, which can scan the U.S. dollar, the British pound, and the euro. The machine immediately detects bad bills entered in any direction. 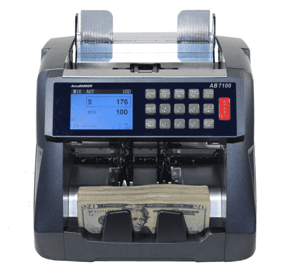 For just under $1,000, the AB7100 model provides infrared, UV, and magnetic detection, but it doesn’t have the orientation counting option. iTestCash also sells non-detector machines that count and sort mixed bills and machines that count loose and rolled coins.

“It’s always good for businesses to keep aware of counterfeit money”, advises Reichmann. “Just to prompt people to look out for it. Also, putting up signs about counterfeiting could discourage it.”