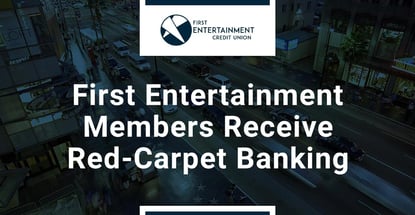 First Entertainment Credit Union has reliably served people working in film and entertainment at every level in the industry since 1967.

It was founded by employees of Warner Bros. Studios on a small production lot originally under the name Warner Seven Federal Credit Union. Over the years, it has merged with other credit unions associated with film, music and entertainment, including Columbia, MGM, Paramount, A & M Records, and Six Flags, to name a few. Eventually it was renamed First Entertainment Credit Union after switching from a federal to a state charter.

First Entertainment currently operates nine branches in Los Angeles County and manages $2 billion in assets with a team of more than 220 employees. Its membership base now stands at nearly 90,000.

Membership is available to those who work at any of the companies First Entertainment represents and their family members, and extends to anyone who lives, works, worships, attends school or operates a business in Los Angeles County.

An incredible amount of manpower goes into manufacturing the glitz and glamor associated with Hollywood and the mega stars at the forefront of film, music and other forms of entertainment. And not every actor or entertainer has a net worth in the tens of millions.

The reality is that most people who work in these industries have modest incomes, and they need to balance their finances just like the rest of us.

Since industries of this nature rarely provide traditional financial support structures that are more common with typical salary-based jobs, it only makes sense to have banking institutions that cater to those types of workers who don’t receive a W-2.

So for First Entertainment Credit Union, the idea of servicing the local community isn’t common banking jargon – it’s about providing a real resource for those who need support.

Credit Cards Designed for a Range of Spenders

As for credit cards, First Entertainment has a number of options to choose from depending on the needs of the customer.

Recently released is the new Spotlight™ Visa credit card, which comes with several interesting features for a low $75 annual fee. The card offers streaming service reimbursements up to $120 per year and many travel and entertainment-related benefits, including car rental privileges, lost luggage reimbursement, VIP hotel upgrades, and reimbursement of up to $2,000 per person for trip cancellations and interruptions. Card holders also get to earn two points with every dollar spent for certain types of purchases and can gain 20,000 bonus points if they spend at least $2,500 in the first 90 days.

The Visa Platinum Card is also a good option for those looking to carry a balance at a low rate, while the Preferred Cash Visa Card comes with a $100 sign-up bonus and 1.5% unlimited cash back, and is a great card for someone looking to be rewarded for their everyday spending.

Each card comes with a 0% introductory offer for 12 months on purchases and balance transfers made within the first 90 days. In addition, all cards have no foreign transaction fees and come with an EMV chip and tap-to-pay functionality.

“Our Platinum Visa and Preferred Cash Visa are both also available as Secured Visa Credit Cards, which are a great option for individuals looking to build or repair their credit,” says Daniel Arita, Vice President, Payments and PMO.

Educational Resources Include Counseling and Webinars

First Entertainment Credit Union also cares a great deal about the financial well-being of its members and the community.

The credit union provides members with online financial education through an interactive digital module powered by EverFi. By visiting the Financial Education Center, members can discover nearly 50 courses organized into seven main categories. Each course only takes about 10 minutes and can be completed on mobile devices.

“As a not-for-profit, member-owned credit union, we have a strong emphasis on promoting financial wellness,” says Arita.

Another important but often overlooked topic is financial education for children, especially very young children. First Entertainment tries to tackle this issue by providing additional online resources to help children learn about finance from an early age, and shows parents how to teach their children.
That also ties in with First Entertainment’s work with the greater community.

“In addition to these services, we provide our members free access to their credit score, full credit report, and monitoring through our Digital Banking platform,” says Arita.

While the brand has changed in name and gone through a number of mergers over the years, First Entertainment’s goals have grown and evolved as it proceeds into the 21st century.

When it first started out as Warner Seven Federal Credit Union, it only had $40 in assets.

Over the next 10 years, the credit union grew and expanded its services and member eligibility.
By servicing more entertainment-based industries, the brand required a new name to fit its updated membership base. So in 1984, it was renamed First Entertainment Federal Credit Union.

First Entertainment Credit Union was originally intended for those who work in film and entertainment, but it has expanded in versatility. That diversification is now reflected through its connection with the broader Los Angeles community it serves.

The Summit FCU: A Modern Suite of Financial Tools