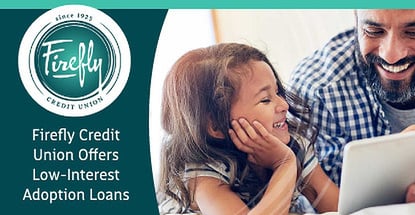 In a Nutshell: Minnesota-based Firefly Credit Union aims to bring families together by providing a fixed line of credit that can be used to fund up to 90% of adoption expenses. Working with two US agencies, Firefly launched its adoption loan program in early 2018 to assist growing families in managing the cost of taking a child into their homes. Today, the credit union continues to expand its network of adoption agencies as it helps families welcome kids into their forever homes. //

Deciding to grow your family through adoption is one of the biggest and most impactful choices you can make — not to mention one of the most expensive.

On average, the cost of raising a child is upward of $200,000, and adopting a child in the United States can set parents back between $35,000 and $50,000. The steep cost of adoption can be a barrier that prevents parents from even setting foot in an agency. 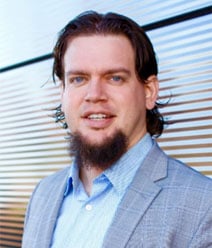 Firefly Credit Union’s Geoff Bullock is an adoptive parent who knows the process is challenging.

Firefly Credit Union aims to make adoption more accessible to families by easing the financial burden the process entails with its new, low-interest adoption loan program, launched in February of 2018.

“Here in the United States alone, over 20,000 kids age out of foster care every year without finding a forever family and over 26 million kids worldwide are double-orphaned and in need of a home,” said Firefly Community Engagement and Education Specialist, Geoff Bullock. “We said, ‘Wow. It’s just unbelievable that all these kids will never know what it’s like to be part of a family. It’s heartbreaking.'”

As an adoptive parent himself, Bullock has firsthand experience with the intimidating price tag and complexity attached to the adoption process.

“I’ve dealt with it, and I know other people at Firefly who have as well,” Bullock said. “We felt that this was a need we could fill, and we had the resources and the opportunity to do it. We’re big believers in family.”

A Fixed Line of Credit Eases the Financial Burden on Parents

Bullock noted that, while other institutions throughout the US offer adoption loans, Firefly is unique in offering its borrowers an unsecured fixed-rate line of credit with flexible repayment terms.

“There are other institutions nationwide that have versions of adoption loans, but they’re all installment loans — and oftentimes they require collateral. One of the things we found is that not everyone has the collateral they might need to cover a forty-something-thousand dollar loan,” Bullock said.

Amounts for Firefly Credit Union’s adoption loans start at just $5,000 and can reach a maximum of $40,000. Upon approval, borrowers have 24 months to access funds, and begin repaying the loan after funds are first used.

“With installment loans, if you take out a $40,000 loan, you have to pay interest on $40,000 the first month you’re paying the loan back. Instead of doing an installment loan, we have a line of credit. You do two years to lock it in, and then you pay 1.5% of the balance back,” he added.

The credit union estimates that families who borrow the maximum $40,000 amount and pay back the minimum balance can expect to repay their loan in full within 89 months.

When Firefly Credit Union launched its adoption loan program in February, it had partnered exclusively with two adoption agencies, the Children’s Home Society and Lutheran Social Services of Minnesota. Firefly recently extended its loan eligibility to include families whose adoption applications are approved by other agencies.

“We still verify and approve the individual adoption agency to make sure they’re a trustworthy place, but it’s expanded to be not just the Children’s Home and Lutheran Social Services anymore, which is a very exciting development,” Bullock said.

The complexity of the adoption process, especially in the case of international adoptions, often means that multiple agencies will be involved in a single adoption. This is because each agency is offered only a few “adoption slots” from each country, which sometimes necessitates collaboration across multiple agencies to bring a child to his or her new home.

“For instance, there was an adoption agency in Portland that was working with Lutheran Social Services in Minnesota to help a family in Wisconsin through another agency in St. Louis — and they were adopting a kid from Thailand,” Bullock said. “It’s so unbelievably complicated. Just working with one or two agencies wasn’t going to cut it; we had to expand beyond that.”

Investing in the Future: Approved Applicants Receive a Gift for Their Child’s First Savings

Firefly Credit Union’s adoption loan program exists to provide a brighter future for the children who need forever homes with loving families. From the moment kids arrive home to their adoptive parents, Firefly embraces them into the credit union culture by making a $500 deposit to an FFCU savings account in the child’s name.

“We welcome them to membership here, and we start them off with savings,” Bullock said. “We don’t just want to help them join the family, but we want them to thrive financially throughout their life, so it’s an initial deposit for them to get started.”

At its heart, Bullock said Firefly Credit Union’s adoption loan is focused on people rather than profit.

“When people ask, ‘How did you make the interest rate that low?’ and ‘Why are you giving a gift at the end?’ the answer to a lot of it is because we care about the people. It’s really a people-focused product,” he said.