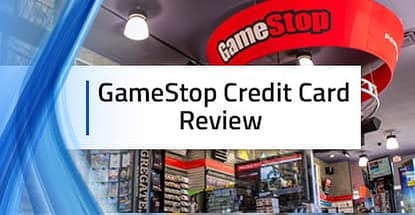 In the early days of collecting gold coins and saving princesses, who would have thought that video games would grow into an industry so large that it needed its own credit card?

Dedication to the hobby — which has become a profession for some — is what drives GameStop. A member of the Fortune 500 with more than 50 million rewards club members, the company has helped turned gaming into a way of life.

While Gamestop may be among the world's leaders in retail video game and system sales, its credit card offering — with weak rewards, high APR, and a closed loop — stalls out before it reaches the end of Level 1.

In terms of rewards, giving $5 in store credit for every $250 spent is on par with a 2% cash back card. But spending $1,500 a year just to earn enough rewards credit to pay for the elite membership dampens any excitement we have towards the offering.

With millions of gamers worldwide, the opportunity to build a card geared toward their needs seems like a no-brainer. With very few perks available without an annual fee, consumers would be better served with a cash back card that could be used anywhere they shop.

Although the company also owns popular brands like Game Informer Magazine, Simply Mac, Spring Mobile and Cricket Wireless as well as thinkgeek.com, which has a growing number of brick-and-mortar stores atop its already popular website, the card can only be used in GameStop stores.

A paid membership through Pro ($15.99 a year) or Elite ($29.99 a year) boosts potential rewards on the card but minimizes their impact after fees are paid. If you spend thousands a year on video games, the card could pay for itself over time if your bills are paid in full each month. An Elite membership also provides two-day shipping on purchases and discounts on used games in-store.

An average cash back card that gives between 1% and 1.5% back on all purchases would pay for that elite membership much faster if you use it to pay monthly bills and other expenses that you can instantly pay off. A far better interest rate makes a cash back card a clear choice.

The GameStop PowerUp Rewards Credit Card is noted for its relaxed acceptance policy, with consumers reporting approval with credit scores in the low-600s. While the card could be used for building credit history over time, it's limited in the ways it can be used — even if you're an avid gamer.

Better Cards to Use at GameStop

Given its closed-loop status, the GameStop PowerUp Rewards card has no use outside of the chain's stores and website. Having no annual fee is a major plus for the card, but unless you spend large amounts on games and systems each year (north of $2,000 annually), the card won't serve a large purpose in your wallet.

Gamers know all about rewards. It's the basis of many marathon sessions that last well into the morning hours. If you want rewards for your effort in a game, why shouldn't you get rewarded for buying the game or system? A cash back card would do just that, plus give rewards for every other purchase you make. With some cards scoring rewards in the 3-5% cash back range, the amount you earn can escalate quickly.

If you're like most gamers, the average shelf life of a game isn't long. A 27.99% APR can have you paying off that game way after you've beaten it.

With a low-APR card, you're not as likely to accrue the rewards that other cards offer, but you'll be rewarded with lower interest charges if you tend to carry a balance. Some issuers offer an introductory period for transferred balances, meaning you can take an existing debt on another card and carry it over to make it easier to pay off in a shorter period.

While you'd need to spend close to $1,000 just to earn enough GameStop Rewards points to get a small downloadable content item, a travel rewards card can get you to E3 or the championship round of your favorite E-Sports league much faster.

With perks that can be rolled into airline miles, the destinations are endless and more rewarding through one of these cards. Some offer redemption possibilities with no blackout dates or airline restrictions, making them the go-to choice for travelers who want flexible rewards.

IfIf you're the type that spends thousands a year on games and systems, the GameStop PowerUp Rewards card may be the best choice for you. The reward point options make elite membership more affordable and offers discounts on used game purchases. Just make sure you don't carry a balance past its initial month, or the interest charges could be a kill screen for your financial livelihood.

Casual gamers and consumers who haven’t played since Pong would be better equipped with a rewards or low-APR card that gives them real benefits for their purchasing power and can be used anywhere and any time.

What Others Say About the GameStop Credit Card

Although GameStop is hailed among gamers, it got headlines in 2017 for less celebratory reasons. The company reported that a data breach put the financial information of anyone that placed an online order between August 10, 2016, and February 9, 2017, at risk. That alone is a reason to give pause to any application you may be considering. Other reviewers have taken issue with the card's online portal and payment system.

I picked this card up back when I went to purchase the Vanilla Xbox One and to repair my credit as well. I lucked out for GameStop had just had a promotion for 0% interest over the course of six months which allowed me to pay off the system without any interest. I also managed to repair my credit and now have a 700 score but from my research, they don't really factor in store credit cards but this one is easy to get with a "fair" credit score. — WalletHub.com

A review from ConsumerAffairs.com says:
“

I only bought about $65 in video games but paid over $200 in various fees and charges. Their website never worked properly from the day I signed up. I finally made payment in full a second time and closed the account. Then they had the gall to try to add additional charges and send me a bill. I want negative overdue payment reports erased. They were mainly due to their website being unable to show me details about my account and/or accept payments. They also need to erase their latest attempt to add charges to a closed account with a zero balance. I also consider all of their charges other than the one purchase I actually placed shortly after opening the account as fraudulent since their website was so poor that I was never able to successfully use it since the date the account was opened. — ConsumerAffairs.com

A review from ValuePenguin.com says:
“

Whether you’re a devoted gamer or ccasionally shop at GameStop, know that there are significantly better options for you than the GameSpot Credit Card. Unlike most other store credit cards, the GameSpot Credit Card doesn’t offer any significant benefits for signing up. Users can earn a low sign-up bonus and not much else. The card advertises the ability to pay off your purchases later. However, with a high APR of 27.24%, we don’t recommend anyone do that. Otherwise your interest charges will be through the roof. — ValuePenguin.com

Is the GameStop Card Right for You?

Gamers are a loyal bunch. They tend to have a favorite system and developer and stick to the options provided by those companies. The same is often said for where they buy their games. You're either with GameStop — or against them.

No matter which side you choose, there are better options for using a credit card to purchase your games or systems. The closed-loop nature of the PowerUp Rewards Credit Card limits the usefulness of it to your wallet. With rewards that only add up with a paid membership to the PowerUp Pro or Elite levels, the rewards barely cover the fees unless you spend multiple thousands each year.