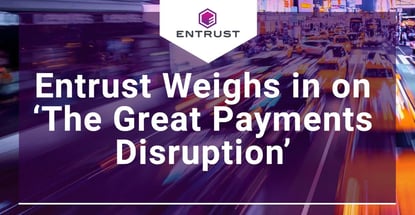 In a Nutshell: Entrust is a leading force in providing technologies to establish trusted identities and conduct highly secure transactions. That includes software and hardware for issuing financial cards, e-passport production, and user authentication. In a recent report titled “The Great Payments Disruption,” Entrust addressed how several digital factors are shaking up the traditional payment standards and suggests ways to reduce unwanted friction and how to adapt to these changes.

Entrust is a major provider of digital security and credential issuance solutions for the transactions that many people make every day – like crossing borders, making a purchase (whether digitally or with a physical card), logging into corporate networks, and even accessing e-government services.

While leading the way in payment security, Entrust has identified an impending industry upheaval that the company has coined “The Great Payments Disruption.” It involves the massive shift to digital banking, contactless payments, and cryptocurrencies, and how these factors affect the banking system now and will continue to do so into the future.

The report itself uses data collected from a survey of 1,350 people from nine countries making and receiving digital payments over the last 12 months to determine their preferences and habits during this period of disruption.

In the report, Entrust highlights that digital banking has become the dominant standard, banking fraud is a growing concern for consumers, and banking institutions are highly susceptible to losing customer trust when fraud occurs.

Many consumers have changed their attitude toward digital banking in a short period of time thanks to advances in technology and an accelerated push to go digital because of the pandemic.
Entrust’s report found that 88% of consumers said they prefer to do their banking online and that having digital banking capabilities is the most important factor for consumers when evaluating banks. The majority said they would even be willing to switch from traditional banks and credit unions to branchless online banking services.

But it appears to be crucial to provide a variety of digital options for customers, since 59% said they prefer using the app from their bank or credit union, while 29% said they prefer to use their desktop web browser. Some people said they still prefer in-person banking, including at a branch (8%) or at an interactive teller machine (3%).

Overall, providing digital solutions that correspond with demands of modern consumers is critical for banks.

At the same time, Entrust’s Product Marketing Director, Andy Cease, notes that physical locations still serve a purpose and that integration is key.

“Banks and credit unions need to focus on up leveling that digital experience, but they can’t lose sight of what is truly a key differentiator for them, which is the physical touch points,” says Cease.

Entrust has also communicated with dozens of banks and credit unions on a weekly basis, discussing the importance of digital integration and plans to implement these goals over a three to five year period. But due to the pandemic “[t]hose were compressed into six to 18 months. And the awareness became an urgency. So I think that there was certainly an accelerant effect of the pandemic,” says Cease.

Fraud is a Key Concern for Online Banking Customers

While the push to go digital has increased drastically over the past few years, it has also accelerated avenues of fraud. Consequently, many customers have become security-conscious since lack of security can have damaging consequences.

During the pandemic, global identity fraud losses hit an astounding $56 billion among all institutions, organizations, business owners and consumers. This figure represents a combined total of $13 billion for traditional identity fraud and $43 billion for identity fraud scams. Those figures don’t take into account indirect costs like damage to reputations or time spent on correcting the issue.

The Entrust study also found that 90% of respondents said they felt concerned about the potential of banking or credit fraud as digital personal finance became more prevalent.

In fact, many of the respondents reported having had personal experience with such fraud risks, with 42% saying they were notified of a personal banking or credit fraud in the past 12 months.

To avoid these consequences, banks and credit unions will not only need to improve their security offerings, but also establish better communication with customers on how advanced technology allows their payments and accounts to remain secure.

The effect that fraud has on customer loyalty is also heavily damaging as 67% of respondents said that fraud influenced their decision to change their bank or credit union.

Given the risk, it is essential for banking institutions to implement strong security protocols. In the long run, the financial institutions that embrace anti-fraud security solutions will be more successful in retaining consumer loyalty.

Aside from helping financial institutions maintain customer loyalty, Entrust is enhancing its strategies by digitally issuing cards to strike a balance between flexibility and security.

But this could be due to a lack of digitally issued cards, since only 53% of respondents said they received one from financial institutions in the past year.

Considering that respondents said they want more flexible options, digital cards may be the solution that banks need to enhance the loyalty of existing customers and attract new ones.

Venmo’s Payment System Has Become a Verb with Millennials