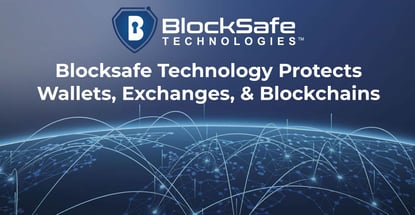 In a Nutshell: StrikeForce Technologies has been a player in the cybersecurity industry for nearly two decades. With the advent of blockchain technology and cryptocurrency, Founder George Waller realized these new industries suffered from security vulnerabilities that could be solved with technology his company had developed and used. The application of this technology is realized through BlockSafe Technologies, which applies high-level authentication and security approaches to crypto wallets, crypto exchanges, and private blockchains. The company does this through its suite of products, CryptoDefender, ExchangeDefender, and BlockchainDefender, respectively.

With new technology comes new opportunities and new challenges, as well as solutions to meet those challenges.

With the proliferation of blockchain technology and cryptocurrency in the past decade, countless opportunities have arisen in major industries from finance to hospitality.

And one of the major ongoing challenges facing those using these new technologies is security.

Some of the most trusted, and thought-to-be secure, players in cryptocurrency — such as Mt. Gox, Bitfinex, and Tether — became victims of high profile attacks in recent years. These hacks not only damaged the companies and lost money for their users, but they also showed that the crypto world has a ways to go when it comes to becoming a truly secure ecosystem.

Just in 2018, more than $1 billion in cryptocurrency was stolen, according to Blocksafe Technologies CEO George Waller, and $9 million is stolen every day from individual crypto wallets.

BlockSafe Technologies takes that same approach but applies it to the evolving world of blockchain technology and cryptocurrency.

“About three years ago, I really started following the blockchain industry and crypto,” Waller said. “I was reading about these breaches that are going on. I realized that the core technologies we had developed had the potential of helping blockchain and crypto.”

Waller said you can break down the blockchain industry into three components — crypto wallets, crypto exchanges, and the blockchains. He began to explore exactly how to protect major vulnerabilities in each of these areas, and the result became BlockSafe Technologies and its suite of products and services.

George Waller is the CEO of BlockSafe Technologies.

This is important because one of the biggest ways in which hackers are stealing from crypto wallets is by installing malware on users’ devices that will copy the users’ private keys, Waller said. This also makes it easy for hackers to steal passwords as well.

“By having those two things, they can sign any digital transaction because they have that key, and they have your password to unlock your wallet,” he said.

But CryptoDefender uses its encryption technology to guard against the theft of private keys. It also protects the user’s password when he or she is prompted to enter it.

CryptoDefender also features clipboard copy protection, which prevents malware from monitoring or replicating what a user has copied to his or her clipboard. The program also includes an anti-screen capture feature to block malware from secretly capturing images of a user’s computer screen.

Another major line of defense included in CryptoDefender is its anti-clickjacking function.

“Displays hidden frames or frames originating from a potentially malicious domain,” according to the BlockSafe Technologies website. “This neutralizes one of the favorite tricks of the hackers to download malware onto your computer.”

For mobile devices, CryptoDefender also includes a secure browser that prevents the storage of cookies and other malware artifacts, as well as a password and data vault.

Crypto exchanges maintain hot and cold wallets, which store the secret keys of the user and the exchange.

ExchangeDefender is the platform that protects against these vulnerabilities in cryptocurrency exchanges.

Meanwhile, the ProtectID system applies technology developed by StrikeForce Technologies, such as out-of-band authentication, as well as one-time pin code delivery authentications to phones via SMS, voice, email, or push and out-of-band push.

This means if an exchange transaction is initiated, the ExchangeDefender platform can actually reach out to the person associated with the account to make sure he or she authorized the transaction.

“Hackers are phishing employees and putting keyloggers on their machines,” he said. “They want to grab the employee’s credentials when they’re logging into the network. Then once they get onto that network, what do they do? They go for the hot wallet.”

By using ExchangeDefender to protect employees, crypto exchanges can guard against security breaches and loss of revenue.

“One problem in the industry is that a lot of people banter around the word immutability like it’s a volleyball,” Waller said. “And when data is actually posted on the blockchain, it is as safe as data can be. You’re not going to get in and manipulate the data because it’s locked into the previous block on the node.”

But Waller said this doesn’t mean blockchains themselves are always safe, it just means that the data — once it’s posted to the blockchain — is safe.

“However, if I take my laptop and I’m getting on to my blockchain app to my company and my computer is infected, guess what? I can now infect my blockchain,” Waller said. “And, understand something, there is no antivirus for blockchain.”

BlockSafe Technologies’ other key product is BlockchainDefender, which addresses the vulnerabilities in blockchains.

“BlockchainDefender acts as a gateway between the application and a private blockchain,” according to the company. “It examines every message, checks if it is allowed as per enterprise rules and policy, scans the contents of data fields for malware and authenticates transactions via the ProtectID system.”

The program can also pass blockchain messages to enterprise systems or other blockchains using appropriate gateways.

BlockchainDefender is expected to change the game when it comes to private blockchains, according to the Bitcoin Exchange Guide.

“Our ExchangeDefender is live, and we’re currently building BlockchainDefender,” Waller said. “We’re building it for the Ethereum blockchain first, then we’ll set out to build it to work with other blockchains. But given the number of people that use Ethereum today, it just makes sense to build that first.”

BlockSafe Technologies is running a security token offering until the end of this year, and Waller said the company’s STO approach is unique because it is offering a revenue-generating token.

“Every 90 days, we are taking 10% of all sales and we give that back to all the token holders as passive income,” he said. “Also, for every token someone buys, we also give them shares of stock in the company.”

Waller said the company is excited and proud to offer these incentives for people to hang on to their tokens.