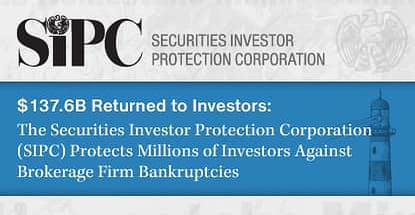 In a Nutshell: Although investing is never without risk, the securities industry was once significantly more hazardous — until the formation of the Securities Investor Protection Corporation (SIPC). SIPC protects investors against loss of assets due to brokerage firm bankruptcy (such as the 2008 Lehman Brothers collapse). The organization is responsible for overseeing the liquidation and distribution of a failed firm’s customer assets, ensuring they are returned to customers. While SIPC can’t protect investors against loss of portfolio value or the purchase of fraudulent stock, it will provide protection up to $500,000 for securities held for customers by a failed brokerage firm, including up to $250,000 for cash claims. //

Over the more than two centuries the New York Stock Exchange has been in operation, it has seen fewer than 2,000 full-day closings. While the majority of the closures were for national holidays, such as Labor Day and Christmas Day, and particularly terrible weather, there have been a variety of other occasions that have shuttered the doors of the stalwart NYSE.

One of the most notable occasions precipitated the closure of the NYSE for not just one day, but one day every week for more than six months, from June to December of 1968. The culprit in such an extended disruption? Too many trades. Or, to be precise: too much paper.

As innocuous as it sounds on the surface, the huge amount of paper moving around the stock exchange in the late 1960s not only shut down the exchange once a week, but triggered a series of major changes throughout the securities industry — including the creation of the Securities Investor Protection Corporation (SIPC).

“SIPC was created by a federal statute in 1970, in the midst of a financial crisis where Dickens’s Bob Cratchit would have been very much at home in the back office of all of America’s brokerage firms,” said Stephen P. Harbeck, President and CEO of SIPC. “Transactions were done by hand, at the unimaginable level of 10,000,000 shares a day. The NYSE had to close because it was getting swamped in paper.” 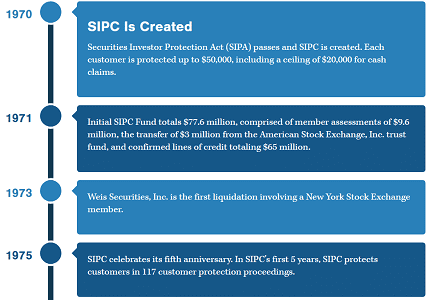 The Securities Investor Protection Corporation (SIPC) exists to protect investors from asset loss in the event their brokerage firm fails.

The paper generated by the millions of trades was more than enough to overwhelm the back rooms of brokerage firms across the country. Unable to keep up with the literal stacks of trades, firms began to collapse.

“Brokerage firms didn’t know who owed what to whom, and many firms failed — and left their customers in the lurch,” Harbeck described. “The legislative response to that massive failure was to pass the Securities Investor Protection Act (SIPA), which created SIPC.” SIPC protects investors against the loss of their assets in the event of a brokerage firm failure. The organization is responsible for overseeing the liquidation and distribution of the firm’s customer assets, ensuring they are returned to the customers with valid claims.

According to Harbeck, SIPC is essentially made up of bankruptcy experts who handle things when a brokerage firm closes its doors. “An easy way to describe what we do, is that SIPC protects the custody function brokers perform for their customers.”

What SIPC Can and Cannot Do

In just its first few years, SIPC was responsible for the liquidation proceedings of more than 100 failed brokerage firms, handling 40 separate cases in 1972 alone. In 1975, however, a variety of changes took place that lowered the average annual caseload to single digits.

“A number of historical factors went into effect in 1975, including SEC rules about the adequate capital firms need to have and segregation of fully paid-for securities. But the most important was the institution of computerized back-office work,” said Harbeck. “By the time you get to the turn of the century, firm failures are becoming a rare event. From 2004 on, we see about one or two firms fail a year. Of course, that can be misleading; in 2008, those two firms were Lehman Brothers and Bernard Madoff. But, I really think those were far more one-off type events than our historical situation.” 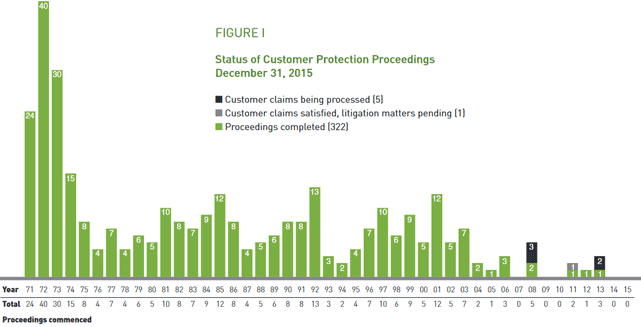 This graph from the SIPC Annual Report shows the total number of cases the organization handles each year.

In general, Harbeck said, a case handled by SIPC averages around $4 million to 5 million — just a small fraction of the hundreds of millions of assets tied up in the Lehman Brothers and Madoff scandals. Regardless of the size of the firm that fails, however, the nature of SIPC’s role never changes.

“When a regulatory or self-regulatory body, such as the SEC or FINRA, tells us that a firm can’t return to its customers the cash and securities that customers have in their accounts, we start a specialized form of bankruptcy,” explained Harbeck. After a firm fails, SIPC liquidates its assets and works to return them to the brokerage firm’s customers. Depending on the state of the firm’s assets, SIPC may also tap its own reserves to restore investors’ assets, up to its allowed limit.

“We can use our funds, which are raised from the securities industry itself, to replace any missing assets in a customer’s account,” Harbeck said. “We can expend up to a half a million dollars in securities, of which as much as $250,000 can be based on a claim for cash to replace missing assets. That’s on top of each customer’s pro-rated share of what is present at the firm.” 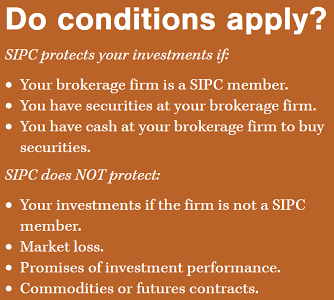 While SIPC protects customer securities when a firm fails, it does not protect them against any loss of value.

“We don’t protect customers against a decline in value of anything in their portfolio. And that’s true even if they bought stock as a result of fraud, inducement of the sale, or anything like that,” said Harbeck. “The reason for that is, you get the benefit of your bargain if you win; the risk never leaves you because the possibility of reward never leaves you.”

Harbeck illustrated the distinction with an example involving stock in an imaginary company, called Fly Out the Window, sold by a broker claiming the company makes a pill that grants people the power of unassisted human flight.

How the Claims Process Works

For those who have lost assets to a failed brokerage firm, the claims process is actually fairly straightforward. When a liquidation begins, a court-appointed Trustee, under SIPC’s oversight, closes the firm and takes control of the firm, including its books and records. If the paperwork is in disarray, this part of the process can take quite a while. After the Trustee identifies all of the firm’s customers from the last 12 months, he or she sends out the necessary paperwork.

“Once SIPC starts a liquidation proceeding,” said Harbeck, “the statute we operate under says we have to send a notice to the last known address of every customer, and send each customer a claim form.” When completing the claim form, SIPC recommends customers describe the cash and securities they are owed by the defunct firm, and attach any supporting documentation. This can include brokerage statements, trade confirmations, and any correspondence with the firm.

The Trustee is responsible for comparing the information in customer claims to that in the books and records of the brokerage firm. If the customer owes any money to the firm, that is deducted from the total owed to the customer, with the resulting amount representing the customer’s total “net equity.”

When a brokerage firm enters liquidation, SIPC notifies each customer and sends them a claim form.

Securities are usually valued as of the “filing date,” which is generally considered to be the date liquidation began. Once a Trustee comes to a conclusion about the validity of your claim, you’ll receive a determination letter explaining the approval or denial. If they agree with the determination, customers can fill out the remaining paperwork and their claim will be processed. In many cases, securities can be transferred to another brokerage firm to expedite the return.

“What we try to do, even before the notice goes out, is find a solid broker that is ready, willing, and capable of taking on those customer accounts,” Harbeck explained. “Then, we transfer those accounts electronically, so you can get control of your assets back as rapidly as possible.”

It may be hard to imagine in today’s digitized society, but the sheer volume of paper once needed to make the bureaucratic world go ’round was quite enormous. A particularly noteworthy example, the hundreds of millions of documents generated by the New York Stock Exchange during the late 1960s was enough to not just close its doors every week, but to permanently shut down over 100 brokerage firms unable to handle the paper deluge.

While those brokerages took millions of dollars in assets to their tree-borne graves, leaving customers completely in the lurch, today’s investors are protected by the Securities Investor Protection Corporation. And although it was created by a federal statute, SIPC is not a government organization, stressed Harbeck. Instead, it is a nonprofit, completely funded by the securities industry itself.

“We currently have about $2.6B to handle our affairs, and the typical case costs us well under $5 million,” he said. “We have never used a nickel of taxpayer money. We do have a line of credit with the US Treasury, but we’ve never used it.”