U.S. Trust Insights on Wealth and Worth® Survey Shows How Opinions on Investing, Family and Philanthropic Giving Differ by Generation 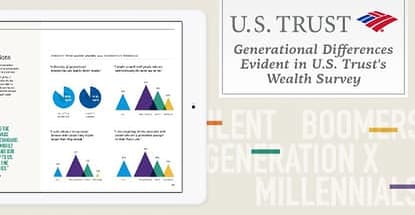 In a Nutshell: The 2017 U.S. Trust Insights on Wealth and Worth survey illustrates that high-net-worth adults from various generations have differing opinions on wealth, family, investing, and philanthropy. As members of older generations hold on to jobs longer, millennials and members of Generation X look to create unique paths to navigate an overcrowded workforce that includes five generations. And while nearly all of the respondents give to philanthropic causes, there is a wide divide in how and what is given, with older generations giving more wealth and younger ones giving more of their time and talent.

It’s every American’s goal to accumulate enough wealth to last them through retirement. Multi-generational wealth is rarer, but some accumulate enough resources to create legacies and pave the future of their children and generations to come. At times, however, wealth can be a sticky subject within families as opinions differ between generations in the way wealth is spent and distributed.

Each year, U.S. Trust, a wealth management-focused subsidiary of Bank of America, releases its Insights on Wealth and Worth® survey. In the latest iteration, 808 high-net-worth individuals with at least $3 million in investable assets were asked about investing, family relationships, philanthropy, and other financial topics. This year’s survey highlighted the growing generational shift, where ideas and opinions on each topic reveal significant change.

One key finding is that millennials are having a harder time advancing in their careers as baby boomers hold onto jobs longer than anticipated. With millennials already the largest of the five generations in the workforce, the group is shifting its focus to more do-it-yourself careers like real estate investing.

The shift in career paths is not the only factor delaying some millennials and Gen X members from starting families. While 68% of younger people say they are expecting, and often relying on, an inheritance to build their wealth, only 40% will actually receive any money.

“As many as five different generations are now active in the workforce and contributing to family dynamics and financial decision‐making,” said Keith T. Banks, President of U.S. Trust, Bank of America Wealth Management. “Perspective and participation of multiple generations are highly valued, but are also complex and require advanced planning and communication.”

These aren’t the only factors widening the gap between generations. The survey shows that very few financial topics are mutually agreed upon, and the gap is only expected to widen over time.

Ideas and Opinions on Investing Vary by Age and Gender

Members of the silent generation (those born between 1926-45) grew up in an era that wasn’t far removed from the stock market crash of 1929 and the Great Depression. While you would think that would have made this group the most conservative of all generations, the opposite is actually true.

Respondents in this group said 82% of their overall wealth is tied up in the riskier area of stocks and bonds, with just 13% in cash. On the other end of the spectrum, millennial respondents are the top cash holders, with 47% of their holdings remaining liquid and 41% in stocks and bonds.

Overall, the younger generations have been slower to enter the stock market than their elders. While some cite a lack of education on stocks as the reason, many affluent members of the younger generations are opting to hold their cash for opportunistic purchases they can control instead of relying on the word of others through the markets.

New areas of investment, like Bitcoin and tech startups, are growing in popularity over traditional company holdings. Precious metals, which can be kept on hand, are also popular among younger investors. A lot of it boils down to mistrust of the stock market among millennials, and their desire to have tangible control over where their money goes.

The gap widens even more when gender comes into play, with more than half of millennial women saying they believe traditional stock investing is for old, white men.

This doesn’t mean that the younger generations aren’t creating nest eggs for their futures. Studies have shown that members of those groups are actually saving more for retirement than any generation before them, thanks in part to mandatory retirement savings plans through many employers. Much of that comes from the expected massive costs of living when their retirement comes.

The younger generations are also more likely to prioritize social good and investing in companies with morals and principles in tune with their own. Many view these investments as a way of giving back and teaching social responsibility. According to the study, 78% of millennials (46% of all respondents) agree that investing in companies based on social, environmental, and governance factors is a way to transfer responsible money‐making principles to younger generations.

For years, there has been talk of the great wealth transfer, as older generations are expected to transfer as much as $30 trillion to their benefactors. The U.S. Trust survey found that 78% of millennials are counting on future inheritances as part of their wealth, while 70% say they are unprepared for long-term health care expenses for their aging parents.

This trend isn’t new. More than $8 trillion was expected to be passed down to baby boomers, though the amount was reduced during the stock market crash of 2008.

Millennials’ expectations may fall short as more than half of millionaire baby boomers think it’s not important to leave an inheritance and that they should be able to enjoy the money they’ve worked to earn. Three-quarters of the respondents in that survey generated their wealth themselves, often with a personal price of their time, blood, sweat, and tears. That seems to be the biggest difference in the shift of wealth, as boomers who inherited money are more likely to leave money to their children, whereas those who created their own wealth are likely to expect their children to do the same.

Millennials Strongly Value Giving Back as a Family

A hallmark of dynastic wealth is philanthropy. Almost all of the respondents in the U.S. Trust survey engage in charitable giving. As with most cases, though, each generation has its own opinions on how and what to give.

While silent generation (79%) and baby boomer (83%) respondents more often make financial donations to causes, only 36% of high-net-worth millennials do the same. Instead, millennials more often (58%) donate their time and talents to causes near to them.

Millennials also differ in what they consider philanthropy. In both cases, this group leads the way with 32% saying that creating jobs through their business ownership and investing in companies that make a positive impact is their way of being philanthropic.

Part of this is due to age, with fewer respondents willing to part with their money with many uncertain years still ahead. The survey suggests that ideas around philanthropy can change as generations age and have less attachment to their wealth and more of a desire to leave a legacy in some tangible way.

U.S. Trust’s findings also show a generational conflict, with approximately one in three baby boomers and older parents believing their children do not share the same commitment to giving as their own generation does. Seven in 10 millennials don’t think their parents are as committed to giving back. Millennials, on the other hand, are three times more likely than baby boomers and the silent generation to view the jobs and solutions they create through business ownership and social enterprises as their way of giving back.

Baby Boomers are Preparing to Pass the Torch Without Getting Burned

Every generation looks to separate itself from the one that came before it. For millennials, investing in Bitcoin could be likened to their baby boomer parents rebelling against their silent generation parents by embracing rock ‘n’ roll.

The silent generation may have scolded young baby boomers for listening to the Beatles and Chuck Berry, but boomers eventually found a way to build wealth. Today’s gen-x, gen-y, and millennials face many of those same challenges, and, with time, will manage their income in a way determined by the times and markets in which they are living.

In 1980, the ratio of workers-to-retirees was 5.2-to-1. By 2025, it is expected to be 2.9-to-1. As our working population ages, new methods and opportunities to expand upon wealth will be created. Philanthropic causes will change over time, and new ways of investing and growing wealth will come to light.

At the same time, gender roles are being redefined as a record 25% of women are making family investing decisions. This role reversal from previous generations is expected to change the way wealth is used and distributed over time.