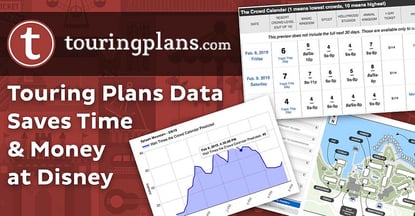 In a Nutshell: Visiting Walt Disney World and other theme parks makes for fun-filled and memorable vacations. But waiting in long lines and spending exorbitant amounts of money can make those trips feel slightly less magical. Touring Plans uses hard data, algorithms, and crowdsourced information to help visitors make the most out of their vacations. We spoke with Founder Len Testa about how he combined his passion for Disney with his computer science background to create Touring Plans. And we dive into how tools like the Lines app and the Crowd Calculator can vastly improve your Disney experience by saving time and money.

As a Florida resident, I’ve had the pleasure of visiting Walt Disney World in Orlando a number of times. Planning a trip to Disney never fails to fill me with excited anticipation as the day approaches. And visiting Disney is always worth it despite the fact that tickets can be expensive, the Florida sun is often relentless, and the lines — oh, the lines.

Thankfully, Touring Plans has combined a passion for Disney with computer science and vast amounts of data to help visitors to Disney and other theme parks save money and time. When it comes to dealing with with the Florida heat and humidity, however, guests are still on their own.

Touring Plans Founder Len Testa grew up in Florida and made frequent trips to the Magic Kingdom. Like so many others, he was often frustrated by the long waits for his favorite rides, including Splash Mountain and Pirates of the Caribbean.

“One time, after I had moved away for college, I came back to visit and waited in line for two hours for The Great Movie Ride,” Testa said. “This was when the lines were all outside. The sun was beating down, you could smell everybody sweating in line. I thought, ‘There’s got to be a better way.’”

Testa began brainstorming and came up with a way to apply his background in computer science to improving the Disney experience. He would use hard data to develop efficient itineraries for a Disney vacation.

“I told them that I wanted to write a computer program where you told the program which rides you want to ride in Disney World, then the program tells you the order in which you should ride the rides to minimize your wait in line,” he said.

The program would have to analyze a number of factors, including historical patterns of wait times at the park, special events, and other occurrences that are happening on any given day in the park.

Testa said his advisors had two questions for him: “Besides you, Len, does anybody care about this problem?” and “Is this a worthy topic for a master’s degree in computer science.”

It turns out the answer was yes on both counts.

“At the time, Disney World theme parks had 40 million visitors per year, and I discovered that long lines are the biggest complaint,” Testa said. “And there’s academic research that says the more rides you ride, the happier you are with your experience. So, I wasn’t the only one with this issue.”

Regarding the second question, Testa said it turns out that minimizing a person’s wait time in line at theme parks is an example of a classic algorithmic challenge in math and computer science called the Traveling Salesman Problem.

“It’s exactly the same problem that UPS and Fed Ex faces every day when they’re trying to deliver packages efficiently to customers,” he said.

With data to back up the problem presented in his thesis proposal, Testa set about making his idea into a reality. He said his thesis actually ended up expanding upon the Ph.D. dissertation of UPS’s lead research scientist.

Testa said he used his master’s thesis as the basis for Touring Plans, which began by offering customizable itineraries for Walt Disney World visitors based on the program he developed. Today, Touring Plan functions as a one-stop shop for a plethora of ways to save time and money on vacations to the Magic Kingdom, Disneyland in California, Universal Studios, and more.

Testa walked us through some of Touring Plans’ most popular features and gave us some insight on how complex computer programs, crowdsourced data, and other factors converge to benefit theme park visitors.

“Right now, the most popular feature, by far, in Touring Plans is an app called Lines,” he said. “It’s the highest rated theme park app in Google Play and the Apple App Store. It’s rated higher than Disney’s own app.”

Users can select one of 150 touring plan templates or customize their own and save up to four hours per day in wait times, according to the Touring Plans website. In addition to selecting which rides they want to ride, visitors can customize the plans by scheduling in meal times, midday breaks, FastPass+ ride reservations, character meet and greets, and other factors.

Once visitors are in the park, Lines — which Testa compares to the traffic app Waze — can tell them just about anything they need to know in relation to park information.

“Lines will show you Disney’s posted wait times for rides as well as the actual wait times because, in reality, the wait times are often different than what is posted,” Testa said. “It also shows how long the wait time is for other attractions, like shows, that may not be included in Disney’s app.”

He said the app even calculates how long each ride lasts and how long it takes to walk from one attraction to the next.

Touring Plans bases its models on a combination of historical data, data collected by Testa and other Touring Plans team members, and other park visitors who use Lines. He said being able to rely on data coming from other Lines users has been extremely valuable.

“We update our model every five minutes,” he said. “If something happens, like a ride breaks down or a large touring group shows up, we will reroute you while you’re in the park. You can read the models a year in advance, but we can update them while you’re there.”

Another key component of Touring Plans is its Crowd Calendar.

Testa said the calendar shows how busy each Disney theme park will be for each day and hour of the user’s trip, using a simple 1-to-10 scale. The Crowd Calendar is also extremely handy for determining when to plan vacations because it shows how busy the parks are on different weeks, months, and seasons.

The Lines app is free to download and comes with select data about crowd levels at Disney theme parks and wait times for a limited selection of rides and attractions. To access the full functionality and take advantage of Touring Plans’ full range of services, users can sign up for a one-year subscription for $15.99.

The Touring Plans website and Lines app are also packed with a variety of other tools to make the most of your theme park vacation.

Testa said that, in the early days of Touring Plans, he and Bob Sehlinger — who co-authors the “The Unofficial Guide to Walt Disney World” with Testa — used to post reviews of individual hotel rooms at Disney resorts. Over the years, customers began requesting reviews of specific rooms.

“Just last year, we got 16,000 email requests,” Testa said. “I answered them all, but I’ve also hired someone to help out since then.”

Testa is the co-author along with Bob Sehlinger of “The Unofficial Guide to Walt Disney World.”

To help meet user demands, Touring Plans partnered with Disney to take photos of the inside of, and view from, nearly every hotel room on Disney property. He said Touring Plans has about 35,000 photos of Disney rooms. And, if a subscriber is interested in booking a specific room, Touring Plans will send a request to Disney on the customer’s behalf five days before he or she arrives.

Touring Plans also provides a convenient ticket calculator that combs through not only the 160 types of admission tickets that Disney sells, but also pulls ticket prices from third-party vendors. Testa said the calculator is free for anybody to use and generally saves families between $21 and $98 on tickets.

And, with an abundance of dining options at Disney parks, Touring Plans provides user reviews, restaurant overviews, and menus that anyone can access.

“In the past two years, we have gathered around 290,000 restaurant surveys from users on Disney restaurants,” Testa said. “That’s more than Trip Advisor and Yelp have combined over their entire lifetimes.”

As if helping Disney fans maximize their next park visit weren’t enough, Touring Plans also dives into the best ways to plan out and enjoy Disney Cruises.

“We maintain a fare tracker for the Disney Cruise Line, where we track the price of every stateroom for every Disney cruise that’s announced,” Testa said. “Another big question people have around cruises is how far in advance to book them. We also have a feature that lets you know when the optimal booking time will be.”

Whether your next Disney vacation is on land or sea, Touring Plans’ wealth of resources should help make it a more cost-effective, efficient, and enjoyable experience for the whole family.

Gary Arndt Shares His Travels on Everything Everywhere