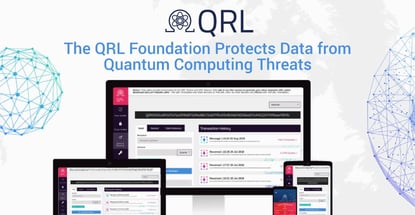 In a Nutshell: While quantum computing poses an unknown, but inevitable, threat to modern encrypted data, the QRL Foundation works to maintain a quantum-resistant blockchain that uses mathematics to thwart future threats. QRL’s Extended Merkle Signature Scheme is more resistant to a quantum attack than the schemes used under the current Elliptic Curve Digital Signature Algorithm (ECDSA) standard. The project has ambitious plans to offer individuals and companies a quantum-resistant blockchain to build upon or store sensitive data and digital assets.

The modern day internet has often been compared to the Wild West. News broadcasts are filled with stories of malicious hackers using the web’s cloak of anonymity to sneak in and abscond with hordes of digital gold comprised of sensitive data and other valuable assets.

If we were to compare these hackers to the notorious Old West bank robbers that dot history books, then quantum computing is like Billy the Kid — the biggest, baddest, and scariest villain of them all.

Quantum computing is nothing new. The use of quantum-mechanical phenomena, such as superposition and entanglement, has been used to perform complex computation in the past. But as these computers become more powerful, their ability to decrypt data that was once thought to be impenetrable becomes a very real possibility.

The QRL Foundation understands the significance of this threat. And the mission of its Quantum Resistance Ledger (QRL) is to create a blockchain that isn’t susceptible to quantum computing that individuals and business can build upon or use to store digital assets.

Current blockchain cryptographic standards provide plenty of security to maintain the integrity of private wallet keys. But QRL believes quantum computing will make those standards obsolete in the coming years.

And while quantum computing is nowhere near reaching its maximum potential, QRL knows that it’s important to act early. While some hackers are already collecting encrypted data that cannot be read, it’s a matter of time until the technology exists to expose and decrypt that data.

That’s why the Quantum resistance ledger is an ever-evolving project.

“Quantum resistance is an accurate reflection of the reality,” said Adam Koltun, Lead Business Strategist at QRL. “Our network is presently resistant to quantum technology as it is currently constructed, and where it is likely heading.”

That means the ledger, while currently quantum resistant, will need the assistance of other developers on the decentralized network to keep it ahead of future threats.

“Quantum computing is obviously a technology that’s still in its infancy,” Koltun said. “Nobody knows exactly what it’s going to turn into. So we can’t just go out there and throw around claims that we’re quantum-proof and that our network, as it’s currently constructed and without alterations, will be completely impervious to whatever comes from the technology.”

QRL’s blockchain network is powered by its quantum token with the established currency code $QRL. Transaction fees are paid and calculated through a fraction of the quantum called a Shor.

The ledger’s hash-based signature scheme, known as the Extended Merkle Signature Scheme, or XMSS, is resistant to a quantum attack, unlike the ECDSA cryptography standard used on nearly every popular blockchain network.

The QRL project features developers from around the globe who have come together with a singular goal to use time-tested mathematical theories to combat the dangers of quantum computing. The project has adopted a completely open-source mentality that follows in the spirit of other ambitious blockchain projects.

While we may be years away from knowing the true capabilities of quantum computing, QRL remains confident that it can foresee the future by adhering to proven and tested mathematical theories.

“The beauty about math is that it can predict things, within an extreme degree of accuracy, long before the physical verification of that projection has happened,” Koltun said.

Koltun pointed to the recent release of the first-ever pictures of a deep-space black hole as proof that mathematics can predict the unknown.

“Those pictures showed that Einstein’s predictions from close to a century ago, using mathematics and physics, turned out to be almost entirely accurate,” Koltun said. “He was able to use the consistency that is math to project things before there were satellites and other ways of looking into space.”

Mathematics was around long before quantum computing, and it will certainly outlast the current trend in encryption cracking. That said, the basis for these super-computer programs often comes from aged theories that were designed in a time when there wasn’t enough technology to prove their power.

Many of the theorems and algorithms used to crack modern encryption were written in the 1980s and given academic stamps of approval in the 1990s. It was just recently that the technology began to catch up with the math.

“The mathematics is a lot older than the technology,” Koltun said. “The first quantum computing qubits weren’t produced until the 2000s. So the math that’s being used to justify what they still aren’t able to do has existed for a little more than 30 years.”

And, in the same way hackers use complex mathematical theorems to create ways to access sensitive data, the QRL project arms itself with similar algorithms to keep user data safe for years to come.

Modern encrypted data remains, for the most part, safeguarded by algorithms that have kept it secure for years. But it’s unknown how long that information will remain safe. With quantum computing’s potential, the information that a company thinks is safe may one day become vulnerable to data thieves and other cybercriminals.

And while certain data — like credit card numbers — can change, become outdated, or deteriorate over time, Koltun warned that other information can hold its value forever.

“There are some data that is evergreen,” he said. “Companies should have a vested interest in keeping things like their financial data or their internal and sensitive communications safe, not only from current threats but from future and potential threats that are ultimately inevitable — the only question is when they’ll begin.”

And when those threats emerge, QRL expects to help its users meet them head-on with a level of security that goes beyond even the power of quantum computers.

“When we were on the gold standard and kept more gold in banks, there were a lot more bank robberies,” Koltun said. “Now, we keep digital gold — data and information — in these sort of digital banks. We use these massive network systems that are owned and managed by companies that often have poor security practices and bad data hygiene. That invites these modern-day bank robbers, who are quasi-celebrities and their way of life is a little bit demonized and a little bit amplified.”

While America no longer uses the gold standard for its banking practices, Koltun said the world as a whole is moving toward more of a data standard, where our personal and sensitive information is the gold that we use to build our modern identities and fit into the world around us.

“Equifax showed us how that data can be compromised overnight and completely change our world,” he said.

QRL is an Evolving Project with Ambitious Intentions

As digital wallets and other secure forms of data storage become more common among today’s consumers, the desire by malicious hackers and data thieves to crack their encryption will only grow. This data — be it financial, medical, or other personal information — can ruin lives, take down companies, and cripple economies if used improperly.

And quantum computing could very well be the tool that makes the decryption of this data a reality. These computers have the future potential to, in seconds, decode strings of encrypted data that once seemed impossible to crack.

The QRL project is fighting this faceless enemy with help from developers around the world and has an ambitious list of goals it wants to achieve in the coming months and years. This includes smart contract integration onto its blockchain, in addition to developing an Ephemeral Data Messaging Layer that will allow users to communicate securely in its network.

“We have many other features that we’re working on for future implementation,” Koltun said. “Some of the features are ones that we aren’t entirely sure if they’re feasible or even possible, but we’re still trying. The others aren’t a matter of if but rather a matter of when they will be available.”

As these idealistic features become a reality, there’s little doubt that QRL’s future-proofing of the modern blockchain will make its offering a top choice for developers who want to build secondary-feature applications on top of a secure, established blockchain.

How Byteball Could Disrupt the Current Crypto Fee Market