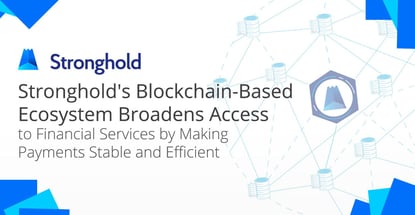 In a Nutshell: The financial services networks typically used for cross-border payments and currency exchanges were invented generations ago. But blockchain technology shows promise for new efficiencies in the space — and Stronghold is at the forefront of that transformation. Its Stronghold USD stablecoin token is backed by the U.S. dollar, and it operates on the Stellar network — which focuses on compliance and transparency. Stronghold also helps financial services companies and infrastructure providers — including IBM — create faster, more secure, and cost-effective pathways for exchange.

In 2017, an estimated $625 billion in remittances was sent by migrants to individuals in their home countries. But the process of transferring those remittances remains time-consuming and expensive. And those system inefficiencies don’t just affect people looking to send money back home — businesses transacting and exchanging across borders face the same problem.

That’s why cryptocurrencies, like Bitcoin, which operate on a secure and transparent blockchain, are so intriguing. They have the potential to facilitate transactions between any two parties, anywhere in the world, without the need for intermediaries — including banks and wire services.

It hasn’t quite worked out, though, because cryptocurrencies aren’t backed by tangible assets, meaning their speculative value can fluctuate widely. Meanwhile, public blockchains have proven more vulnerable to more hacking and fraud than initially anticipated.

But blockchain technology itself has attracted the interest of financial institutions and infrastructure providers looking for efficiency. And San Francisco- and New Zealand-based Stronghold has developed a platform and an approach that leverage the best aspects of the blockchain and use them to modernize the payments industry — and benefit everyone.

It accomplishes that through its Stronghold USD stablecoin that has a value backed by the U.S. dollar. The stablecoin allows for reliable transactions and values that don’t fluctuate as wildly as those of other cryptocurrencies.

An Enterprise-Compliant Stablecoin and Platform for Borderless Payments

Stronghold is rooted in the work Bennett and Co-Founder and CEO Tammy Camp began in 2011-12. Camp was then managing the distribution program for the Stellar network’s Lumen cryptocurrency, and Bennett deployed the first fiat-to-crypto exchange on that network.

Initially, the team looked at helping institutional players interact with cryptocurrencies and other digital assets — with an emphasis on the trading space.

“We were looking at institutional trade and asset management,” Bennett said.

Stronghold developed a blockchain cryptocurrency that is backed by the U.S. dollar and tied directly to its value.

What Stronghold’s prospective clients needed was a token that could function on a blockchain-like distributed ledger as a proxy for fiat currency. That way, they could take advantage of the borderless efficiencies inherent in the blockchain without subjecting their business prospects to the instability of an unbacked coin.

To accomplish that, Camp and Bennett partnered with Stellar to deploy a stablecoin — Stronghold USD — on the network. Acting as a network token, Stronghold USD leverages the Stellar platform’s efficiency as a distributed ledger. But the stablecoin isn’t cryptocurrency — it’s tied directly to the value of the U.S. dollar.

“That got everyone’s attention,” Bennett said. “We hesitate to use the term ‘stablecoin’ ourselves, though we acknowledge that it does have descriptive power. But we took a different approach from other coins — with a heavy compliance lean and other features so that it could deploy in enterprise environments.”

The development of Stronghold USD led to a change of direction for the company. In July 2018, the firm announced a partnership with IBM Blockchain to work on its World Wire solution.

IBM Partnership and Projects Explore the Efficiencies of Blockchain Transactions

IBM seeks to leverage blockchain across a range of enterprise contexts, including retail, media, insurance, financial services, among others. In a dynamic environment, IBM is forging partnerships with large firms in need of bottom-line results and holistic expertise in the space.

“I think the reason we were chosen was that we had a close working relationship with Stellar,” Bennett said. “Given that in 2011 and 2012 we were the first business to operate on the Stellar ledger, that made working with IBM a lot easier.”

What distinguishes Stronghold and IBM’s enterprise-ready version of the blockchain from the public versions is limited accessibility. As a permissioned network, IBM World Wire allows its clients to control access and limit participation.

“One of the biggest draws we’ve gotten out of our IBM partnership is demonstrating that we know how to operate an enterprise-compliant stablecoin,” Bennett said. “We had to go through due diligence with IBM to get over the line. And it works — that’s the most powerful benefit we’ve seen.”

Even after proving its worth by teaming up with IBM, Stronghold continues to seek additional partnerships and use cases for Stronghold USD and the platform, which now features its own API infrastructure. That helps developers create tools to integrate the Stronghold stablecoin and platform into their ecommerce sites, including payments, trading, mobile wallets, remittances, and more.

“Having the IBM brand association has been powerful for us,’ Bennett said. “It has helped us in our discussions with other enterprise players that are trying to figure out the space.”

On the payments side, savings from improved processes are felt not just on the enterprise level but also by individuals sending money home a little at a time.

“Our technology disrupts the correspondent banking process, and that’s the reason why I got into this space in the first place,” Bennett said.

Bennett illustrated his point with an example that hits close to home. His mother’s side of the family is from the Philippines, so he provided an example of sending money between the Philippines and New Zealand. He said that since New Zealand banks are smaller than their Australian counterparts, they must rely on U.S. intermediaries to process payments.

That means users have to pay more than they would if they remitted funds out of Australia or the U.S. And numerous other intermediaries add time and cost as those funds make their way to the Philippines.

“It’s saving time and cost that would be incurred using traditional banking routes. With something like World Wire in place, the settlement of digital assets takes five seconds at most and involves one direct conversion. And that’s enabled by having assets that can be trusted on top of blockchain technology.”

Gift Off: Europeans Can Buy Digital Gift Cards with Crypto