How STASIS Built a Euro-Backed Stablecoin That Seeks to Challenge the U.S. Dollar’s Dominance in Global Financial Markets 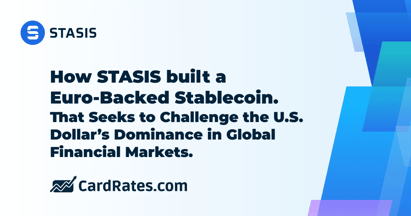 In a Nutshell: The U.S. dollar has been the world’s leading reserve — or anchor — currency since 1944. But the STASIS tokenization platform aims to change that with its EURS stablecoin, which offers greater transparency and ease of use. The value of EURS is tied to the euro — the world’s second global currency — and can boost efficiency for both everyday market transactions and the more complex workings in the financial sector. And some European nations have already committed to creating legal frameworks for the use of cryptocurrencies — with others likely to join soon.

In 1944, representatives from the Allied nations met in Bretton Woods, New Hampshire, to regulate the international monetary and financial order after the end of World War II. During the conference, they devised a system that established the World Bank and the International Monetary Fund. They also agreed to replace the gold standard with the U.S. dollar as the global currency, a decision that would set the stage for the U.S. becoming a dominant economic world power. A global currency, also called the reserve currency, is one that is accepted for trade throughout the world and is held in significant quantities by governments and institutions as part of their foreign exchange reserves.

Over the decades, the dollar has become the most popular global currency, even as foreign exchange reserves in euros and the Japanese yen have grown. As of late 2018, the dollar made up 62% of foreign exchange reserves at central banks, and $580 billion — or 65% of all dollars — are used outside of the United States. One-third of the world’s GDP comes from nations that either peg their currency’s value to the dollar or have adopted it as their national currency.

With this sort of history and circulation, the U.S. dollar will be difficult to unseat as the primary reserve currency of the global economy. Another currency would have to offer exceptional value — beyond just monetary value — to make it worth the time and effort of converting.

And Gregory Klumov, CEO and Founder of STASIS, aims to do just that.

“The idea’s very simple: to compete with the U.S. dollar,” Klumov said. “I want to change the global hegemony and the way the United States deals with everyone who is touching dollars, moving dollars, trading with dollars.”

STASIS represents Klumov’s solution to these problems. It is a full-service platform for the tokenization of traditional assets into cryptocurrency. It uses a stablecoin, EURS, that is pegged to the euro, leveraging the value of a trusted, globally traded currency.

EURS combines that value with the speed, accessibility, and transparency of the blockchain to create a more efficient way to transact in the global marketplace.

EURS Stablecoin Founded on Financial and IT Expertise

The dollar has spent the better part of the last century as the bedrock of global economics. But the current banking system has inefficiencies, including downtime and security vulnerabilities. Those can be solved with cryptocurrency, but crypto assets also have drawbacks — most notably volatility.

Klumov’s background has acquainted him with both the monetary and tech sides of the finance industry, which STASIS brings together. At the age of 15, Klumov built his own high-speed internet service, establishing a solid foundation in information technology. It also showed him the difficulties of dealing in dollars outside the United States.

“If you are a small to medium-sized business outside the United States, you have a tough time moving dollars,” Klumov said. “And it became increasingly painful the last 10 to 20 years.”

Klumov’s subsequent education included training in programming, mathematics, cryptology, economics, finance, and business. As he explained in a TEDx talk, Klumov was attracted to hedge fund management due to his fascination with outmaneuvering competitors through careful research, analysis, and calculation.

During his time in fund management, he administered a global portfolio of diverse assets. That financial experience, coupled with his early familiarity with technology and networked systems, gave him the knowledge necessary to build and deploy STASIS. It also helped him recognize the global need for such an entity and to realize a way that he could meet that demand.

After the dollar, the euro is the next most-popular reserve currency, making up 21% of central bank foreign currency reserves. That is due to the European Union’s status as a major world economy. As of early 2019, the euro was the seventh most valuable currency in the world, two places ahead of the dollar.

“The euro as a currency has been underappreciated by the world for its transactional capacity. Middle Eastern countries and some in Africa that were ex-French colonies, for example, have the euro as their second-biggest currency or official currency,” Klumov said. “If you compare them on a global level, the euro is pretty similar to the dollar: total money supply, GDP of the economies supporting this currency, and number of people using it.”

Because of the value the euro offers, Klumov had the idea of putting it on the blockchain — in a way. That’s why he created EURS, an on-demand, immutable euro-backed asset.

“What I like about blockchains, proof of work blockchains especially, is that they allow you to quantify trust, and I speak about it briefly in my TEDx talk,” Klumov said.

That trust is based on blockchain’s transparent circulation of assets. Banks aggregate capital and invest it, but individual account holders aren’t privy to where their money is or how it’s used. As a hedge fund manager, Klumov saw firsthand what happens when institutions aren’t transparent or held accountable regarding how they deploy funds. And the rest of the world saw the same thing during the recession of the late aughts.

But blockchain inherently maintains an accurate, transparent record of transactions and custody of assets. On a blockchain, tokenization is the digital representation of a traditional asset’s value. Even non-fungible — or not interchangeable — assets, including works of art, may also eventually be tokenized.

“You can have a trusted, immutable ledger in the public domain,” Klumov said.

Tokenizing the value of the euro creates greater transparency and accountability among the institutions and consumers that trade with EURS. It also creates a greater measure of security. And, just as importantly, it makes transactions much more efficient in terms of time and cost.

EURS is a proprietary cryptocurrency that is tied to the euro’s value as a fiat currency. That means EURS enjoys low volatility while still reaping the benefits of being on a blockchain, including instant transfers, no intermediaries, and lower costs. And blockchains, unlike banks, are always up and running.

“The Bitcoin network has proven it’s the single most stable computer network created by man,” Klumov said. “Its uptime is 99.999%. If you want to transact, you can.”

The island nation of Malta provides an ideal use case for this sort of digital asset. According to Klumov, Malta is home to 500,000 full-time residents and attracts an additional 2 million tourists each year, with tourism growing at a rate of 12% annually. And all of those tourists come carrying credit cards issued by foreign banks.

EURS is tied to the value of the euro and makes cross-border transactions seamless.

The local banks in Malta charge acquiring fees that range from 3% to 9%. If a traveler pays 5,000 euros per week for a vacation rental, that comes out to nearly 500 euros in fees — and the transaction can take 30 days to show up. But, by using EURS instead, the transaction takes under a minute for a flat fee equivalent to about 50 euros.

Another use case for EURS is arbitrage. Klumov said the currency provides an efficient mechanism for moving value between exchanges, particularly for traders moving in and out of crypto who don’t want exposure to the U.S. dollar.

“They buy the EURS stablecoin and then, on-demand, transact from it to the crypto of their choice for speculative purposes. Once they’re satisfied with the performance of a particular position, they trade it back into EURS and wait out the market volatility,” Klumov said.

In the United States, the situation surrounding Facebook’s Libra digital currency illustrates the country’s opposition to — or at least skepticism of — cryptocurrency. Maxine Waters, Chairperson of U.S. House Committee on Financial Services, cited the lack of a clear regulatory framework for cryptocurrencies within the United States as a central rationale for congressional resistance against Libra’s rollout.

But some nations — Malta among them — are moving forward with legal frameworks that will regulate cryptocurrencies and facilitate their mainstream adoption. That is due, in no small part, to the efforts made by Klumov and his team at STASIS.

“We are behind the crypto movement in Europe in terms of the legal force that lobbies for a set of rules and legislation to allow this marketplace to exist,” Klumov said. “Malta is now called Blockchain Island, partially because my team was influential enough for the local government to create a legal framework around virtual financial assets.”

This framework is live in Malta, replete with legal opinions and confirmation of EURS as legal tender. France is expected to pass similar legislation in fall 2019. As Coindesk reports, the legislation will establish regulatory oversight for digital assets and guarantee bank accounts for crypto-related projects that opt into regulation and taxation. France is pushing for other E.U. nations to adopt such a framework, and Klumov believes large European economies will follow suit and expand the scope.

“This legal regulation movement is moving to other European countries like France, Spain, and Italy, to name a few,” Klumov said. “Also, we are about to publish a second edition of our book on regulation, where we analyze all jurisdictions and what is happening in the crypto industry. We also suggest the type of framework required for something like a stablecoin to exist.”

Currently, the legislative model establishes a new type of asset: the virtual financial asset, also called a digital asset. But Klumov sees the need to subdivide this category further to reflect the realities of digital currencies, which include security tokens, utility tokens, and asset-backed tokens, including stablecoins.

“The governments have their learning curve, and I anticipate in the next couple years they’ll be addressing this issue,” Klumov said.