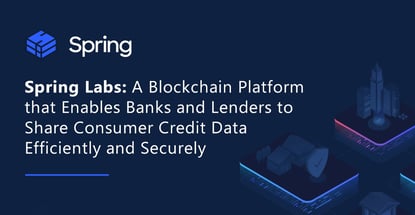 In a Nutshell: Credit bureaus perform essential gatekeeping functions for lenders, but even after a massive data breach in 2017, credit bureaus remain vulnerable to hackers. And the data they share may also limit the lender’s view of consumers — especially new-to-credit and unbanked prospects. Spring Labs leverages blockchain technology to better protect data and make it visible for lenders and show a more holistic picture of consumers. The platform deploys an integrated and secure shared data access ecosystem for lending competitors and increases precision in the lending industry, which also benefits consumers.

Blockchain entered the mainstream in 2017, with Bitcoin exploding in value and enterprises starting to explore the security implications and potential of decentralized platforms.

Also in 2017, one of the three major credit reporting agencies announced that hackers had gained access to sensitive personal information. That included names, Social Security numbers, and credit card information for 143 million consumers — one of the largest such breaches ever reported.

The founders of Spring Labs saw both of those developments and decided to find a way to merge the efficiencies and security of blockchain technology with improving data reporting on consumers. Adam Jiwan, Anna Fridman, and John Sun developed Spring Labs as a blockchain platform and protocol that allows lenders to share consumer data securely.

Lenders gain even more data for their decisions based on in-depth consumer insight. And consumers ultimately benefit from the gains brought by that increased precision.

The team realized that the 2017 credit bureau breach was just the most prominent example of a vulnerability that was having a chilling effect on the centralized datacenters serving the financial industry.

“Not only were consumers much more susceptible to identity theft and a host of issues that go along with it, but the institutions themselves were also becoming more reluctant to share information,” Mason said.

The result was a limit on the amount of data available to lenders. Spring Labs, which launched in January 2018, aimed to correct that.

“Access to data can do wonderful things for lenders, and consumers see those benefits as well,” Mason said.

Aligning the Interests of Lenders and Consumers

The Spring Labs blockchain platform aligns competing interests by securing data in ways that make it more actionable to the parties sharing it.

“We’re not collecting most sensitive data, we’re tokenizing it before it enters our network,” Mason said. “Our lender partners can deploy our software within their own datacenters, with operations designed to protect data — including hashing, encryption, and sharding — being done there, not by Spring Labs.”

That’s fundamentally different from how other information networks operate, as many encrypt data only in transit or where it is held.

“There are always gaps in protection of sensitive data, by encryption or other means, almost by necessity,” Mason said. “Whereas, if you collect data that’s already been hashed and encrypted, you never have to worry about being hacked.”

Spring Labs is not classified as a credit reporting agency under Fair Credit Reporting Act regulations. Instead, it enhances identity and fraud verification processes either before or after the qualification process occurs, depending on the lender.

“If a consumer is new to credit or has a thin file, you actually may care more about their employment stability, their ability to earn income, and other factors more than their credit score,” Mason said. “And I think this is the way the world is moving, even when credit scores are available.”

Evidence for that view goes back at least to the economic recession of 2007 and 2008 when credit scores moved only moderately despite consumer creditworthiness being in free fall.

“What changed was employment status and income status,” Mason said. “If a consumer has stable income and employment verifiable on our network, that can be a signal to lenders that no material additional verification is needed, and that can be something helpful to the consumer.”

“Fraud losses and losses from credit go right to the bottom line,” Mason said. “And in a hypercompetitive market, with banks, fintechs, and neobanks all competing for consumers everywhere, you can minimize fraud with deeper, more granular data.”

The Spring Labs protocol incentivizes lenders and other platform participants by compensating them for their contributions to the ecosystem while protecting competitively sensitive information. That also helps lower onboarding friction and additional costs while encouraging data diversification within the system and leading to a more realistic consumer view.

It all translates into a set of fraud and identity verification products that help build that world of inclusiveness the financial services industry desires.

“Anything you can collect as part of an application, including phone number, address, and implicit things like IP address, bank account number, income, employment, and home status, are identity fields that we verify across our network,” Mason said.

On top of that is an anti-loan-stacking product that is proving to be of particular value to institutions in today’s high-velocity lending environment, when a consumer applies to multiple lenders at the same time.

“The bureaus try to provide real-time data on consumers, but sometimes there’s a lag, and across bureaus, there’s no way for them to reconcile that,” Mason said. “There’s a gap where you can get three loans at the same time through different lenders that all fund in minutes. And we help fill that gap, which is a huge benefit for lenders.”

As financial services increasingly moves online, acquiring the type of security and efficiency that a decentralized data sharing platform like Spring Labs offers is vital.

“Moving into digital banking and online lending and away from branch banking and lending makes the risk of fraud significantly higher,” Mason said. “It’s a lot harder to commit these types of frauds offline, and they’re a lot less scalable.”

And, when economic upheaval puts additional pressure on the system, the need to protect it for all consumers is even more critical. In the wake of the COVID-19 pandemic, transparent onboarding and ongoing support from Spring Labs eases that transition.

At Spring Labs, ample API documentation and other support materials serve as constants for client-side developers. And the Spring Labs team works to bring additional insights into the platform processes.

“We have a dedicated product success team that clients can think of as a group of technical product managers who will walk them through the integration process right alongside our engineers,” Mason said. “We also operate an integration test environment where clients can confirm the technology is working and get comfortable using nonsensitive data.”

“Fintech lenders, including SoFi and Avant, have been amazing partners since the beginning,” Mason said. “And when GM Financial came on board as our first major non-fintech partner, that was helpful as we expanded into auto lending.”

Additional product innovation and partnerships are on the way.

ARK Allows Anyone to Utilize Blockchain Technology with Ease