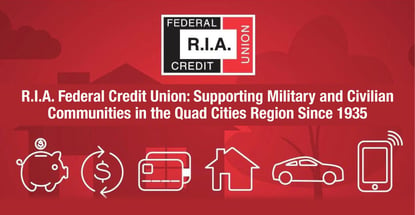 In a Nutshell: R.I.A. Federal Credit Union began service in 1935 at the Rock Island Arsenal, the U.S. Army installation operating on an island in the Mississippi River in the heart of the Quad Cities region of Illinois and Iowa. Now, with seven branches located throughout the Quad Cities and another four outisde of the region, R.I.A. maintains its close connection to the military through a variety of service and support initiatives. The credit union also extends support to Quad Cities communities at large through volunteerism, fundraising efforts, and educational programs that improve the region in many ways — and has earned our Editor’s Choice™ Award for Community Commitment.

The Rock Island Arsenal sits on an island in the Mississippi River in the heart of a region known as the Quad Cities, which actually encompasses five major municipalities in Illinois and Iowa. The largest government-owned military manufacturing facility in the U.S., the Arsenal also houses a U.S. Army headquarters and provides a variety of logistics and support services for the Armed Forces. More than 6,000 Quad Cities residents work there.

R.I.A. Federal Credit Union was founded in 1935 to support the Arsenal and still operates a branch there. Now serving civilian and military members with 11 branches in the Quad Cities and beyond, today’s R.I.A. reveres its legacy as a military institution that focuses on building a more positive future for all its members. 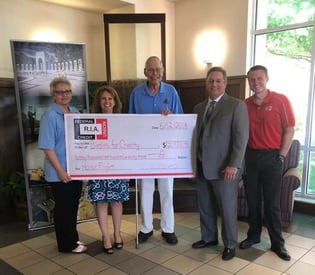 R.I.A has helped fund veteran tours of war memorials since 2015.

One way R.I.A. pays tribute to its military roots is through its support of Honor Flight of the Quad Cities, an organization that honors veterans and their families by flying them to tour the war memorials in Washington, D.C.

R.I.A. has been involved with Honor Flight since the organization’s founding in 2008 and has hosted a golf outing to help fund the tours since 2015.

“We’ve always been cognizant of how important our military is and supporting those who served us,” Ward said. “It was a no-brainer for us to get behind such a great mission.”

Giving Back to Military Members and Families

R.I.A.’s support for military members and their families rests on a broad foundation of military-friendly products and support services.

R.I.A. is a 2019 silver sponsor of the first-ever Quad Cities Veterans Experience Action Center event being held in July by the U.S. Department of Veterans Affairs and area hospital network UnityPoint Health. Veterans Experience Action Center events are held all over the country and offer veterans a sort of one-stop shop for accessing a variety of VA and community support services.

The credit union is a member and supporter of the Rock Island Arsenal chapter of the Association of the United States Army (the army’s professional association) and a supporter of USO Rock Island, the organization that keeps America’s service members connected to family, home, and country while they serve.

R.I.A. also supports the U.S. Army Family and Morale, Welfare, and Recreation (Army MWR) programs that are delivered at the Rock Island Arsenal and at nearby Fort McCoy in Wisconsin.

Army MWR manages programs and services that support readiness and resilience for soldiers and families — everything from child and youth services, like daycare, to libraries, outdoor recreational opportunities, entertainment, and dining facilities, among other things.

Although R.I.A. remains appreciative of its military origins, over the years it has evolved to serve a much broader base of Quad Cities members, and its community efforts reflect that.

For example, this past April was National Credit Union Youth Month. It was the perfect time for R.I.A. to highlight its commitment to the youth of the Quad Cities through its KARS (Kids Are Rewarded for Saving) and myCA$H programs.

Available to children 12 and under, KARS teaches the importance of saving and entices kids with rewards for doing so. Participants track their progress using a punch card, with every deposit counting as one punch. Prizes range from school supplies, such as pencils and highlighters, to movie passes and more. 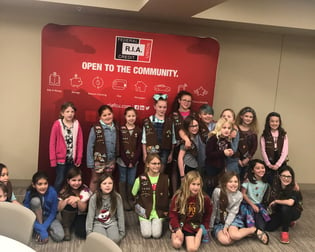 R.I.A. teaches kids the importance of savings and incentivizes deposits.

“We give the kids prizes as they come in during the month to save and enter them in drawings to earn a little more money,” Ward said. “We’re encouraging new youth accounts to get the kids thinking about saving and learning about money, and then promoting our current youth savers to save a little more.”

For teens aged 13 to 18, myCA$H provides access to online and mobile banking, a custom debit card, auto loans, and even credit cards. Participants who saved $200 in April 2019 were entered for a chance to win an Apple Watch.

R.I.A. promotes KARS and myCA$H on social media and on its blog. “For Youth Month, we did a blog entry, and we’ve done a video about why it’s important to get kids thinking about money and saving,” Ward said. “If you develop the savings habit early, it’s just going to help you in the future.”

R.I.A. and its employees always have something going on whether it’s financial education programs, volunteerism, or fundraising events in the Quad Cities communities. 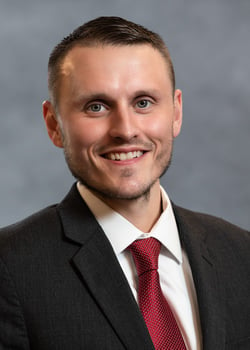 On the volunteer and fundraising front, R.I.A. is a sponsor of the Quad Cities Heart Walk, which has raised money on behalf of the American Heart Association to support research and caregiving for area heart patients and families for 25 years.

“Our CEO is actually chairing that committee,” Ward said. “We also do a United Way campaign in October, and February is the month for our big food drive for the local food bank.”

“We’re at their orientations where we do breakout sessions with free pizza, things like that,” Ward said. And for young professionals, the credit union hosts daytime lunch-and-learn sessions and evening workshops.

It all adds up to a Quad Cities credit union that builds on its military origins in many ways, large and small, to make life in the communities it serves better for everyone.