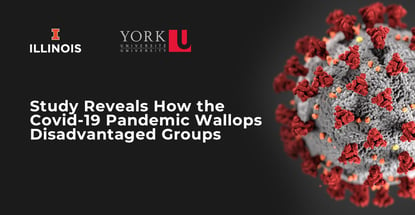 In a Nutshell: A recent study looked at the impact of the Covid-19 pandemic on occupations, industries, and demographic groups. The most important findings showed that employee layoffs have been more widespread in lower-paying occupations and industries. Moreover, historically disadvantaged groups have suffered the brunt of increased job loss and decreased hiring rates. These groups include women, minorities, young people, and those with lower education levels.

It goes without saying that just about every person in America has experienced some impact from the Covid-19 pandemic, which shows no signs of ending anytime soon. A recent study reveals that some groups have been disproportionately hurt by pandemic-related job losses.

The study, conducted by Dr. Eliza Forsythe, Co-Author and Assistant Professor at the School of Labor and Employment Relations for the University of Illinois at Urbana Champaign, used Bureau of Labor Statistics (BLS) data from January 2015 through April 2020. The BLS Current Population Survey is the official U.S. government source of unemployment rates and related data.

“With the Covid-19 pandemic, the labor market and the economy have been changing quickly,” said Dr. Forsythe. “Usually, economists are slow, and we take a while to come up with new ideas and new reflections. But this was a very accelerated study because day-by-day conditions are rapidly changing. New data continues to come out and the situation continues to evolve.”

Dr. Forsythe and the study’s co-author, Dr. Guido Matias Cortes of York University, were trying to understand who’s really been affected by job losses from the pandemic. They were also looking for which jobs were lost and whether particular groups of disadvantaged people were bearing the brunt of the job losses.

The researchers used more than five years’ worth of data and isolated the impact of the Covid-19 pandemic by correcting for seasonality and longer-term employment trends. Distinguishing the pandemic’s impact from other factors helped Dr. Forsythe understand how certain occupations, demographic groups, and industries have been affected.

To be sure, the job losses due to Covid-19 were widespread, with a 10.3 percentage point increase in the unemployment rate in April 2020. The study found that the pandemic worsened pre-existing inequalities by causing significantly higher job loss in lower-paying industries and occupations, such as hospitality, food services, personal care, cleaning/maintenance, and recreation.

The researchers plotted the changes in employment rates by occupation as a share of the total population for the period of February through April 2020. The occupations were ranked left to right from lowest- to highest-paid.

The results clearly show that the pandemic caused greater job declines in the lowest-paid occupations. In fact, the 12 lowest-paying occupations experienced statistically significant and quantitatively large declines in employment, with the sole exception of the farming/fishing/forestry industries.

The occupations that suffered the greatest impact were, in descending order: waiters, cashiers, cooks, maids, laborers, and retail salespersons. On the other hand, the highest-paid occupations showed little job loss and even some gain.

The study did a similar comparison of ranked occupations versus the hire rate over the same period. The researchers found that job losses dwarfed gains. In fact, changes in hiring were so weak as to be statistically insignificant for most occupations.

Low-paying food preparation/service and cleaning/maintenance jobs, in particular, experienced a significant decrease in hiring. The only other occupations to experience a significant hiring decrease were construction workers and community/social workers, both of which are mid-ranked for pay.

The study showed that job losses were disproportionately concentrated among younger workers, those with less education, racial and ethnic minorities, and women. This is not surprising, given that they tend to be the groups that are normally worse off during downturns, according to Dr. Forsythe.

“They’re the people that have the hardest time. And, typically, these are groups that tend to have higher unemployment rates and lower job-finding rates. So, there are certain segments of the population that, for a variety of reasons, are harder hit by downturns,” said Dr. Forsythe.

The study sought to ascertain whether the most-affected workers were more likely to hold certain jobs. The data indicated that the service sector was the hardest hit. Tellingly, when the researchers controlled for the type of job, they found that disadvantaged groups were still the most impacted.

“So it’s not just that they’re in industries and occupations that have been harder hit by the Covid-19 crisis,” commented Dr. Forsythe.

In addition to the disadvantaged demographic groups suffering higher rates of job loss, the study also found that the same groups had lower hiring rates for low-wage jobs.

“I think each demographic group has its own story,” explained Dr. Forsythe. “And so, for people without a college degree, there are fewer jobs available for them. That can make it harder for them to find jobs. For non-white workers, there’s fairly good evidence that discrimination plays a role in hiring, making it harder for these workers to get hired. Also, many firms prefer experienced workers to younger ones. All this means that, if you lose your job, it takes a lot longer to find another job because of this discrimination in the labor market.”

The Pandemic Will Eventually Hurt Many More Industries

As noted earlier, some of the highest paid jobs, including those in the architecture, engineering, computer, and mathematical disciplines, had negligible unemployment rate changes compared with those in low-wage service sectors in the same February through April time frame.

Recessions tend to start in a particular segment of the economy and then spread out. Over the past few months, the service sector has been on the leading edge of job losses. However, over the next few months, things may get worse for other industries.

Dr. Eliza Forsythe, Co-Author and Assistant Professor at the School of Labor and Employment Relations at the University of Illinois.

Naturally, the ability of employees in certain industries to work from home leaves them better insulated from the shutdown. But other mid- and high-paying industries may start to feel the effects of the pandemic.

“We have this pandemic and this shutdown, which directly affected certain industries,” said Dr. Forsythe. “But it also meant that lots of people lost their jobs and are not spending money. Whenever we have a recession, this decreased spending creates negative feedback that spreads throughout the economy to other industries that initially weren’t as directly affected by the pandemic.”

According to Dr. Forsythe, many more people than those counted in the unemployment statistics have lost their jobs. In other words, many people not identified as unemployed may be cutting back on their spending and thus aggravating the recession. However, the latest statistics show retail spending rebounding strongly in May, albeit from a low base. So, the course of the recession over the remainder of the year is unclear at best.

Clearly, it will be important for policymakers to pay extra attention to groups whose financial standing was unstable before the pandemic, as they are likely to be in even worse shape now.