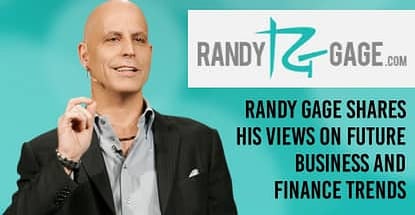 In a Nutshell: Everyone has heard a good rags-to-riches story, but Randy Gage actually lived one. Jailed at 15 for armed robbery, Gage managed to turn his life around over the next four decades while studying the proven principles of prosperity. Today, he shares his knowledge through his best-selling books, public speaking engagements, YouTube channel, and podcast. His latest book, “Mad Genius,” is a manifesto for entrepreneurs on how to unleash their creative genius and critical thinking so they can look around the corner, know what is going to happen in the future, and build wealth from it.

There’s an old saying in sports that goes it doesn’t matter how you start the game, but how you finish it. The same goes for many other facets of life, including business.

Entrepreneurs aren’t born, they’re made. And making a successful businessperson takes time and, quite often, mistakes. The key to reaching your true potential is learning from those mistakes and ensuring they don’t happen again.

Randy Gage understands this idea more than most people. An armed robbery attempt to fund a drug deal landed him in juvenile jail at age 15. Four decades later, Gage is now a best-selling author and motivational speaker who writes self-help books and lectures on the subjects of success and prosperity.

He calls his latest title, “Mad Genius,” a manifesto for entrepreneurs on how to unleash their creative genius and critical thinking to be able to look around the corner, know what is going to happen in the future, and build wealth from it.

“The book is essentially about how you can anticipate opportunities that are coming around the corner,” he said. “It looks at trends and shows ways to get in front of those trends.”

Mad Genius is Gage’s 11th authored book. In it, he examines how innovation, discovery, and creating disruption require blowing up conventional thinking and unleashing the reader’s entrepreneurial brilliance.

“I originally planned for ‘Mad Genius’ to be a sequel to my last book, ‘Risky is the New Safe’, with a deeper look into the future and how we predict it,” Gage said. “But as I got into the writing, I realized that there are some amazing futurists out there. I felt the greatest gift I could provide readers with this book is to write about how we can prepare for the future, the kinds of things that will be happening, and particularly how entrepreneurs can turn those challenges into opportunities.”

While “Mad Genius” pays homage to past innovators, the book’s main focus is on ways readers can tap into their ability to spot current trends and uncover ways to leverage them for profit.

“Really, the whole platform of this book is to show how this next decade is going to be the most cataclysmic decade in human history,” Gage said. “We’re going to face challenges like we’ve never experienced before. But every one of those challenges has a corresponding opportunity.”

Gage pointed to the proliferation of smart technology as the stepping stone to new innovations that will change the way we live. He said that people who can get in on these innovations on the ground floor are the ones who will profit the most.

“Any futurist will tell you that the future is already here — it just isn’t evenly distributed yet,” he said. “The technology that will change the world is already in place, but where it will go next is the main topic of interest.”

Gage used the example of smart appliances, like a refrigerator that will have the ability to reorder items needed when supplies get low, based on its knowledge of how often you consume the item and how long it will take to have the item delivered.

“The truth is, these things are just within reach, but they aren’t evenly distributed around the world,” he said.

Differentiating Between Hard and Soft Trends is Key

Gage said one of the questions he is asked the most during his speaking engagements or through email from readers is how innovators are able to predict the future. He said the first step is to look at any current trend and decide if it is a hard or soft trend.

“After that, you ask yourself if it’s a linear trend or a cyclical trend,” he said. “Cyclical trends are things that sometimes go up and sometimes go down, like currency, real estate, or precious metals. Things like broadband access are linear because it will continue on a steady path upward until everyone on earth has access.

“When something is a hard, linear trend, you can be sure that the future will end up there.”

From Inmate to the “Great American Success Story”

Gage admittedly made several poor choices when he was younger, but he turned those experiences into the motivation he needed to escape a life of poverty.

“I guess I’m something of the great American success story,” he said. “I’m the product of a single mother who raised three kids by herself. I’m a high school dropout and spent time in jail for armed robbery when I was 15 years old. I made a lot of really bad choices early in my life.”

Randy Gage is the best-selling author of 11 books.

Once he was released from juvenile jail, Gage moved to Miami, Florida, and worked as a dishwasher in a Pancake House for minimum wage. He became a manager by 16 and started in the network marketing industry with Amway at age 20. He owned two pizza restaurants by 30, but accrued tremendous debt when the locations failed.

“One day, I just made a commitment to turn my life around,” he said. “I hated being poor, so I decided to study the principles of prosperity and have continued to do so for the last 35 years.”

Gage took those timeless principles of prosperity and found ways to apply them in practical applications in the real world. He wrote his first book in 1996 and hasn’t stopped writing since.

“I love to write and always wanted to be a writer,” he said. “My love for reading really saved me when I was young because I dreamed of being a writer. When I got out in the business world, I found that people were always asking for advice on how to do things that I had done. I started doing speaking engagements at that point. Writing, and publishing books, just came out of those speaking engagements.”

Gage’s books, speaking engagements, YouTube shows, Podcasts, and social media channels have put him in contact with many people who experienced life changes after reading his work.

“I hear from a lot of readers who tell me they find my books to be very motivational and inspirational,” he said. “I didn’t really write it to be that way, but that’s how it ended up.”

Breaking Through the Glut of Bad Online Business Advice

In early 2018, Gage unveiled his The Power Prosperity Podcast. He currently posts around three episodes each week, with current and previous episodes available for streaming or download across most popular platforms.

“I took my YouTube show and put it in an audio format for people who like to listen while they’re driving and don’t care to see the video,” he said. “I also record any live events I conduct and put them on the podcast. Sometimes I do shows specifically for the podcast subscribers.”

Listeners, watchers, and readers alike seem to appreciate Gage’s no-nonsense approach to building wealth. He said he appreciates the chance to engage with so many people who want to grow and learn like he has over the years.

“There’s so much bad advice in the space,” he said. “I want to simplify it for people so they can concentrate on the things that are really important to them.”