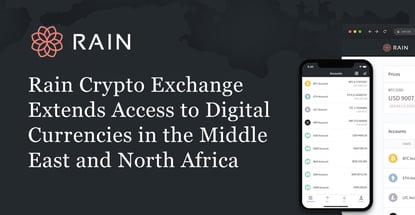 In a Nutshell: The Middle East and North Africa are home to a large population of unbanked and underbanked consumers. That’s why Rain provides alternatives to traditional financial services that some find unavailable or too costly. Rain is the first licensed, regulated cryptocurrency exchange native to the Middle East and Northern Africa. The company places a high priority on regulatory compliance and network security, ensuring users remain safe from hackers and scams. And the Rain exchange is in the process of obtaining licenses in additional countries to expand its offering to even more consumers in the region.

In 2012, Yehia Badawy was attending graduate school in San Francisco. He made time in his busy schedule to participate in local group meetings about an emerging digital currency called Bitcoin.

At those meetups, Badawy rubbed shoulders with up-and-coming cryptocurrency luminaries like Charlie Lee, inventor of Litecoin, and Brian Armstrong of Coinbase. And when Badawy moved back to Cairo in 2014, he decided to establish a local community of fellow crypto enthusiasts.

“I’d been living in the states for a couple of years, so I was just trying to reconnect with the community, find out what’s going on,” said Badawy, Co-Founder of Rain. “But I also founded my own company in Egypt, and my ambition was to start a cryptocurrency exchange in the region.”

Rain, which was co-founded by AJ Nelson (USA), Joseph Dallago (USA), and Abdullah Almoaiqel (Saudi), is a region-specific exchange designed for crypto buyers, sellers, and traders living in the Middle East and North Africa.

The platform — established in 2017 and licensed in Bahrain since 2019 — allows regional users to access the alternative financial system of cryptocurrencies. And its licensing and regulatory compliance ensure consumers have confidence that their funds, both fiat and crypto, are safe and secure.

“That’s paid off in spades because we have people now saying, ‘Having the license gives me assurance,’” Badawy said. “And it also shows how this industry can grow in the region.”

Rain’s focus on the Middle East is a natural fit for two reasons. First, half the exchange’s founding team is native to the region. Second, most other major regions had established, reputable crypto exchanges — except for the Middle East. Badawy and the other founders said they knew there was a significant gap in the market, both for crypto and for the financial services it enables.

“Our region was the only major region without a regulated exchange,” Badawy said. “I’m from here. I was in the National Bank of Kuwait in their brokerage department. I knew how big the finance and banking industry is in our region and how people would be interested in an alternative.”

According to Badawy, many people in the region lack access to some financial instruments the rest of the world takes for granted.

Additionally, the region is home to many migrant workers, making it a major corridor for remittances. The rate of remittances grew by about 10% between 2017 and 2018, according to a joint study published by the World Bank and the Global Knowledge Partnership on Migration and Development.

Blockchain technology can facilitate those cross-border transfers more efficiently and cost-effectively than traditional institutions and services.

“All of those services tend to have very high fees,” Badawy said. “Most people have to use options like MoneyGram and Western Union. We feel the technology exists to solve a lot of these frictions. That’s why we’re doing this.”

The Rain team found itself at a crossroads early on in the company’s development. They could have purchased a white-label solution and branded it in the region. While that would have made the team plenty of money, it would not have solved the problems that consumers there faced.

“So we created a sustainable and trusted exchange. We took the longer, harder, less-assured route of engaging with the regulators, creating a foundation for regulation, and bringing the region into the network.”

Badawy and his co-founders liken the platform’s role to that of internet service providers in the early days of web access. Just as they were portals by which everyday people could connect to the internet, Rain serves as a portal into the world of digital currency.

But because those currencies are financial assets, exchanges like Rain enter the realm of government regulation — which tends to be cautious and slow.

“As a technology startup, that’s really against all the principles,” Badawy said. “But it was important to engage with them and get them on board because that’s the only way institutions will get involved, and it will trickle down from there to the masses.”
That also allowed Rain to earn consumer trust by showing that it is not just an ICO company trying to get money for nothing.

“We view ourselves as a security company before anything else,” Badawy said. “At the end of the day, we hold custody of millions of dollars worth of crypto and fiat currency. The fiat currency is kept with licensed banks in Bahrain, so the focus is on the crypto side of things.”

That focus has led to the implementation of multiple layers of security. Not least of these is meticulous compliance with cryptocurrency security standards (CCSS). These standards ensure user financial data remains confidential and protected against breaches.

Rain offers consumers a variety of secure ways to enter the cryptocurrency market.

Rain received a portion of its startup funding from BitMEX, a mercantile exchange that also helped upgrade Rain’s security capabilities and implement industry best practices. Those practices include leveraging cold storage, which keeps assets disconnected from the network, effectively protecting them from digital theft. Rain is also committed to working only with trusted partners that have done substantial due diligence. And the same is true of its hiring policy.

“Security is a core to our team,” Badawy said. “If you were to join the Rain team, the first thing you do, in the first hour, is security onboarding. That comes before you even get a formal welcome to the team. It’s really at the heart of what we do and how we operate.”

In 2017, the Rain team met with representatives of the Central Bank of Bahrain to discuss the region-specific crypto exchange and to clarify questions about blockchain technology. The bank’s representatives liked what they heard and offered to help the team move forward with the project.

“They told us about a program called the Sandbox program, which is a testing environment for fintech companies,” Badawy said. “Instead of having to adhere to all the laws and rules and regulations that exist in heavily regulated industries like finance or banking, you could start your idea in a controlled environment with certain thresholds in place.”

Rain remained in the sandbox from late 2017 until February 2019, when the Bank of Bahrain established crypto-asset regulations for the financial industry. Rain immediately applied and became the first licensed exchange in the region in July 2019.

“And we’ve been operating ever since,” Badawy said. “It’s a fun story. I never get tired of telling it.”

But the story doesn’t end there. Rain has plans to develop and launch an advanced trading platform. It will allow users to place advance orders in addition to market orders, which Rain currently offers.

Rain is also in the process of acquiring more licenses to operate in more jurisdictions. As of May 2020, the team is in talks with regulators from two more countries. It plans to launch in one of those countries in Q3 or Q4 of 2020. As for the other, it is preparing to enter another sandbox-style experiment in early 2021.

Rain’s focus on licensing and regulation means that expansion may be slow. But it will establish the all-important reputation of competence and security that will inspire confidence in consumers and enable broader access to critical financial tools.