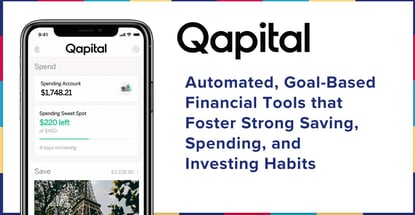 In a Nutshell: Establishing and sustaining positive financial habits can be challenging, but the right resources can make it a little easier. That’s why Qapital developed a suite of tools based on insights from the study of behavioral economics. Users can set savings goals, like making a down payment on a house, and the platform automatically sets aside money for that goal. For longer-term goals, including retirement, Qapital also offers an automated investment tool with pre-built portfolios. And its weekly budget tracker allows users to keep discretionary spending in focus and improve their money management skills and financial behavior.

Consumer spending escalates through the week, starting slow and peaking as people reach the weekend, according to aggregated Gallup tracking data. And that learned habit may be the result of current American lifestyles.

As kids, the weekend was often the only time we had to spend our entire allowance on video games or baseball cards. That time restriction typically continues as we become adults. We may go out for drinks after work on Friday or attend a party on Saturday night — the fun, social events that now define our weekends.

But for people who struggle with budgeting and money management, those weekend spending habits conflict with establishing a much more critical practice: building savings. And the future financial impact that can have is dramatic.

Changing ingrained habits is no easy task, and it helps to have some guidance and gentle nudges in the right direction. That’s what users get from Qapital, a full-service banking app for U.S. consumers that features goal-based savings, weekly spending tracking, and access to pre-built investment portfolios.

Qapital’s tools help users manage their money with less effort and stress by taking small steps to guide changes in their behavior. But what further differentiates Qapital from other such tools is that its resources are all backed by scientific insight gleaned from behavioral economics.

“We have not built anything that isn’t grounded in academic research,” said George Friedman, Co-Founder and CEO of Qapital. “That could translate into dry, boring products if we did it the wrong way. But we make Qapital elegant, simple to use, and well defined. I think we struck a good balance between goal-based savings, goal-based investing, and goal-based spending.”

In an age of machine learning and neural networks, artificial intelligence has become commonplace in the fintech space. But when dealing with personal financial behavior, these tools may not be as helpful as one would think.

“When you think about behavioral economics, it’s actually very far from AI. It’s the opposite,” Friedman said. “It’s difficult to use just transactional data and AI to figure out what’s right for our customers.”

Instead of using analytics, AI, and neural networks to predict behavior, Qapital acquaints itself with user behavior via the tried-and-true method of an introductory questionnaire. Users creating an account answer questions about their spending habits and savings goals. Based on their responses, they will develop a personalized plan to make wiser spending and saving decisions.

“For big, long-term impact decisions, there’s no way for the human brain to translate opportunity cost in a good way. We have to help them,” Friedman said. “That’s the mission we’re on. But it starts with how it works for you instead of what will work for someone else.”

Users are in charge of setting their own goals and are encouraged to upload images that will help them visualize their reward. Based on their timeline and budget, they can decide what contributions they’ll need to make to their savings.

“It’s earmarked, so if we don’t know where the customer is trying to go, what they’re trying to save up for or trying to do with money, it’s hard to help them,” Friedman said. “We ask people upfront to state their goals and put a picture on them.”

But sometimes, having a goal isn’t enough. Plenty of people want things — perhaps a bigger TV — but immediate gratification often lures them away from the prize at the end of the path. And in those cases, when willpower alone isn’t enough, a little digital assistance can be the catalyst for success.

“Automated savings is the name of the game,” Friedman said. “Ideally, you want to automate the savings transfers as soon as you possibly can.”

In a perfect world, savings would come directly out of a paycheck, like Social Security and taxes, and go straight into savings. Short of that, Qapital’s automated savings system withdraws a predetermined amount from a user’s account before a paycheck is deposited, making saving money more palatable for people who hate to see their wages immediately dwindle.

Qapital also offers the option to automatically save toward specific goals — even those shared by two users. Friedman said that, due to the financial transparency the feature involves, it is targeted at couples with joint goals, including taking a trip or buying a home.

A second tool, Qapital’s Spending Sweet Spot, helps users increase their savings by establishing a budget. Budgeting is the foundation of good money management, but the act of creating a monthly budget can be daunting with so many expenses and transactions to account for.

Qapital simplifies that by narrowing the scope to discretionary spending every week. The Spending Sweet Spot feature establishes a spending range — rather than a fixed dollar amount — to help users spend responsibly throughout the week. The critical component is that Qapital’s week starts on Monday, so by the time the weekend rolls around, users have already spent a chunk of their discretionary budget. Seeing how much they’ve spent helps users rein in exorbitant weekend spending.

“The data that’s coming in is very compelling, and we see 30% less spending if you set up a weekly budget,” Friedman said.

One of the Spending Sweet Spot’s most significant advantages is that it helps users recognize just how much money they spend when they’re not busy earning that money. And that is an important lesson to learn — and a habit to curb — for those planning a child’s education or their own retirement.

“People think they’re going to need about the same amount of money when they retire,” Friedman said. “They actually need more money because they’re not working.”

While budgeting in the present can be challenging, building an investment portfolio based on what you may need in the future proves much more difficult. Again, Qapital has users covered with its automated investing tool.

This feature follows the same philosophy as Qapital’s automated savings accounts, but it’s designed for retirement and other long-term goals. Instead of putting money aside in a savings account to slowly accrue interest, the money is invested in one of Qapital’s curated portfolios, allowing value to accumulate over time.

Qapital allows users to earmark money to save for specific purposes, including buying a home.

And users won’t need to trouble themselves with which assets to purchase or which stocks to invest in. They can select one of five pre-built options that suit their investment goals. Each portfolio holds various assets, including stocks and bonds, and investment strategies that range from conservative to aggressive. Users can select the plan that best fits their aversion to risk and the timeline of their investment goals.

“It’s very popular. We’re seeing a good amount of users picking it up,” Friedman said. “The investment product has been a good addition to the platform.”

The Path to a Financial Goal Begins with Positive Habits

Saving, on its own, is a positive financial behavior because having an emergency fund is becoming increasingly important as the world experiences a period of economic uncertainty. By combining dedicated saving with curbing spending — especially on weekends — Qapital users can set even more money aside, whether it’s for a rainy day or a more specific goal.

In late 2019, many Qapital users shared their goals on Instagram using the hashtag #MyQapitalGoal. Publicly committing to a goal creates a sense of accountability and often increases the chances of success — and, in this case, it gave people a chance to win $1,000. The goals users shared were varied: producing a new music album, funding a college education, going on a dream vacation, making a down payment on a house, paying off debt, or to just start saving.

Those goals illustrate a key component of personal finance, which Friedman summed up nicely: “It’s so diverse, yet so individual.”

Users also testify to the versatility of Qapital’s tools and their capacity to facilitate greater financial awareness and a more proactive approach to future well-being.

“Before you can invest or even think about buying a house, there are a lot of things that you need to do,” Friedman said. “Basically, not put things on credit cards, and start having a rainy-day fund and some good habits.”

Where to Turn if You’ve Been Denied Your Retirement Benefits