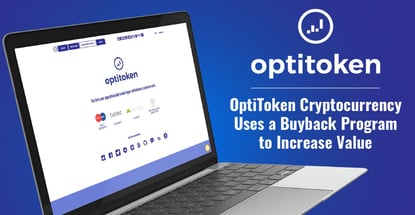 In a Nutshell: Miners who validate blockchain transactions earn cryptocurrency as a reward, meaning the number of tokens in circulation increases. That makes inflation a threat to the value housed in those systems. OptiToken provides a solution to that problem by deriving its token value from other crypto tokens traded with a high-performing algorithmic protocol. Profits from those trades are used to buy back the tokens and remove them from circulation, which means the supply of OptiTokens decreases over time. And the resulting scarcity and upward price pressure cause OptiToken to steadily gain value.

Blockchain-based cryptocurrencies like Bitcoin are digitally mined through a process that automatically increases the amount of those currencies in circulation. That could lead to inflation and loss of value, and it is a reality for Bitcoin and nearly every other cryptocurrency on the market.

But OptiToken differentiates itself by leveraging innovative trading and buyback protocols designed to make its token more scarce over time.

The problem OptiToken seeks to solve starts with the fact that no authority is in charge of crypto. Transactions are housed in blocks of data that simultaneously reside on every computer accessing a particular crypto’s decentralized public network. Mining is the process of validating those transactions — using a powerful computer to solve a complex math problem. The miner who first solves the problem associated with a particular block of transactions adds that block to the chain, earning newly created crypto tokens as a reward.

Without an incentive to mine, no one would be willing to go to the trouble and expense of doing it. But economics tells us that when supply increases, value typically decreases. Bitcoin, the original cryptocurrency, actually limits the total number of its tokens to 21 million. Until it reaches that limit, however, the circulation number will continue to increase. But many other cryptos and altcoins don’t have any limits at all.

That’s why OptiToken launched in late 2017 in response to that trend.

“We were seeing a growing number of altcoins that had enormous or even exponentially growing supplies,” said OptiToken Co-Founder and CEO Sean Donato. “But people need scarcity because scarcity typically drives price. And that’s what leads to adoption.”

In many ways, OptiToken is similar to other cryptocurrencies. It is based on the widespread Ethereum ERC-20 protocol that promotes scalability and trades on the popular BTC-Alpha exchange.

But while most of its peers ebb and flow in value within the volatile and speculative crypto investment marketplace, OptiToken focuses on the long haul. And it sees that difference in philosophy as its chief differentiator.

“Most people have a tough time profiting when exchanging cryptocurrencies,” the company said in a white paper on its website. “Newcomers with a lot of will and very few skills stand to lose much value partaking in such exchanging as opposed to just using one cryptocurrency that focuses on price appreciation as a goal over time.”

The challenge was figuring out a way to achieve ever-increasing scarcity.

The OptiToken team took its message to The Trading Show Europe in London in 2019.

Instead, OptiToken buys them back, generating the organizational profits necessary to do so by using a trading algorithm it developed known as OptiX. “The idea was to make great algorithms, put those to work, and chip away at the supply,” Donato said.

OptiX takes advantage of price swings among a select basket of tokens shown to be statistically or categorically undervalued — “growth driven projects with high upside potential,” as the white paper puts it — with the ultimate goal of buying low and selling high.

According to the OptiToken website, the trading strategy the algorithm uses has helped it outpace Bitcoin’s growth by 8% since its implementation in mid-2018.

The next step involves the creation of demand and scarcity. Every time an OptiX trading cycle is completed, 82% of the profits are reinvested into the OptiX fund, and 16% goes toward purchasing OptiTokens in equal portions among all the exchanges on which it is listed. The small remainder provides infrastructure and operational support.

Buy cycles occur when OptiToken achieves sufficient profits, and price and other conditions are met. According to the white paper, a cycle consists of coins “meeting a certain criteria and then being sold into the next coin that meets buy criteria, assuming the two have a pair. If they don’t, the trading balance will need to be turned into bitcoin or ether to be exchanged into the cryptocurrencies that meet the buy criteria.”

OptiToken creates scarcity by buying back tokens and burning them, increasing the value over time.

The buybacks have two effects. First, they create what the white paper describes as “constant sporadic upward price pressure,” increasing demand for OptiTokens on the open market and creating value for adopters. Second, they generate “strategic scarcity” — a portion of the tokens repurchased are destroyed, or “burned,” as documented on the website. Out of a total of 100 million OptiTokens issued at inception, more than 2 million have been burned so far.

“Shrinking the supply makes sense because it creates scarcity,” Donato said. “The idea is to give more value — over time — to the tokens that people have.”

“ERC20 tokens can code in a burning function which we utilize when a burn is executed. Using Etherscan.io we leverage their coding function to burn tokens,” Donato said. “The burning transaction creates a receipt and is etched into the ETH blockchain, and we have a page devoted to that where people can follow. ”

Donato and OptiToken have created the world’s first cryptocurrency capable of achieving deflation through algorithmic trading. As such, OptiToken and the OptiX trading algorithm mitigate against the loss in value that is a natural consequence of decentralized cryptocurrency.

Traditional fiat currency transactions, whether they occur in physical stores or online, are documented by central authorities encompassing buyers and sellers, banks, and regulatory entities. Those institutions cooperate to legitimize transactions and manage the currencies that enable them. When that system works well, money not only holds its value but also supports lending, a linchpin of economic growth.

“We have a way to get those tokens and remove them from the supply, to make prices deflate relative to the token’s price,” Donato said.

Next on the agenda for OptiToken is commoditizing the algorithm — plans are underway to outsource OptiX as a trading protocol.

“We’re going to do a licensing venture and make the algorithm publicly available,” Donato said. “Essentially, you could buy a license and use OptiX to trade for yourself on an exchange.”

Profits from licensing would then go back toward buying and burning tokens to create additional scarcity.

“That’s what’s cool about our project — the algorithms we’re working on,” Donato said. “One way to access an algorithmic trading program would be to hold OptiToken over a long period. But we’re trying to have a grassroots movement, in a way, to do something fundamental.”