With Crypto-Backed Loans, Nexo Allows Consumers to Access the Value of Their Cryptocurrency While Maintaining Its Growth Potential 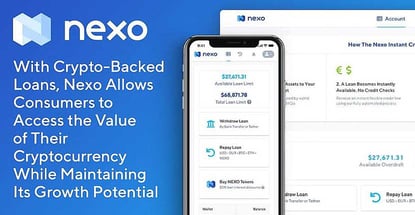 In a Nutshell: Powered by Credissimo, one of Europe’s leading FinTech companies, Nexo offers a new service in the world of cryptocurrencies: instant crypto-backed loans. With loans that are secured by their own cryptocurrency, Nexo users are able to utilize the value of their cryptocurrency holdings without actually having to sell them, which also avoids incurring any taxable events. All the while, if the cryptocurrency value appreciates, users see those benefits as well. Nexo’s process to sign up and receive a loan is simple and straightforward, with users accessing funds almost instantly. The company will expand its offerings in the near future with the addition of the Nexo Credit Card.

Over the last few years, cryptocurrency has become one of the most discussed and most speculated upon topics in the land of FinTech. As the digital realm of currencies continues to grow, so do the possibilities for their use in the real world. In turn, cryptocurrency is a major driver of innovative ideas and technologies that are popping up all across the globe.

While some of these ideas will prove unrealistic or unsustainable, others — like the blockchain technology that gave rise to cryptocurrencies to begin with — will take hold and prove to be valuable additions to the global world of finance.

With a clear-cut concept that fills a niche in the crypto world, Switzerland-based Nexo seems to have hit upon one of those sustainable ideas.

Antoni Trenchev is a co-founder of Nexo, which offers customers instant cryptocurrency-backed loans.

Launched earlier this year, Nexo provides consumers with instant cryptocurrency-backed loans and eliminates the need for credit checks and other barriers to receiving loans through traditional methods.

The idea for Nexo came about after its three co-founders — Antoni Trenchev, Georgi Shulev, and Kosta Kantchev — had all independently come to the same realization. In the stock market, investors are able to borrow against their stocks and access the value of their holdings without having to sell them — but a parallel service did not yet exist in the nascent world of cryptocurrency.

As part of Credissimo, which is one of Europe’s leading FinTech consumer finance companies, Trenchev said he and his partners decided to use their collective expertise to solve the problem before them.

“Since 2007, Credissimo has serviced millions of loans to non-crypto clients,” Trenchev said. “Due to our expertise in credit and automation of processes, we figured that we could leverage that knowledge and know-how to the blockchain space.”

“When we set out to develop Nexo, we wanted to make the most efficient system and user platform for crypto-backed loans as possible,” Trenchev said.

Rather than just watching their cryptocurrency holdings sit in storage (hopefully growing), Nexo enables crypto investors to access the value of their digital assets without actually having to sell them. Before Nexo’s launch, this was impossible.

The service gives users access to cash when they need it. Trenchev said a lot of Nexo users have used their loans to purchase vehicles and some have even bought real estate.

“It’s sort of a touching moment,” he said. “Buying a home is one of the more important financial decisions a person makes. For them to entrust us with this financing is something worth mentioning, I can say that.”

“The second feature that turns out to be quite significant to people is the tax aspect,” Trenchev said.

When a person sells their cryptocurrency holdings at a profit, that becomes taxable income and the seller must pay a capital gains tax. Trenchev said in the U.S. this tax can go up to more than 40% so, so almost half of the seller’s profit can go to taxes. But by maintaining ownership of the cryptocurrency through Nexo, the user does not trigger taxable income.

Trenchev said this is actually a strategy that billionaires have been using for decades — they just keep on borrowing against their stock and they never sell their holdings, and they never pay capital gains tax.

“People ask how we find clients but it’s not so difficult because so many people believe crypto is going up,” Trenchev said. “Cryptocurrency investors are often very bullish and do not need to be convinced that the value of crypto assets will increase.”

Nexo’s Loan Process is Simple and Straightforward, with No Credit Check

Nexo tries to make it as easy as possible to use its service, Trenchev said.

Once users log in for the first time, they will need to verify their account. Basic verification for loans up to $10,000 only requires customers to enter their information for review to meet KYC compliance. They are not required to upload any documents.

Trenchev said it is an automated process and customers are usually ready to move on to the next step in around two minutes.

Nexo users can borrow against their cryptocurrencies while maintaining the benefits of crypto ownership.

Advanced verification is required for loans of more than $10,000 as well as to become eligible for 30% dividends that are paid out to NEXO Token holders. This process requires users to upload a passport, driver’s license, or ID card.

“From there, let’s say you have $10,000 worth of Bitcoin, you deposit that Bitcoin into your Nexo Wallet, which is entrusted to BitGo,” Trenchev said, “BitGo is the only SEC-certified and Goldman Sachs-backed custodian in the blockchain. Everybody uses it from Kraken to the Chicago Mercantile Exchange.”

As soon as the $10,000 of Bitcoin is confirmed through the blockchain, users get their instant credit line. For Bitcoin users, that amount would be 50% of the deposit or $5,000 in Trenchev’s example. Other cryptocurrencies, including Ethereum and XRP, have different loan-to-value ratios ranging from 20% to 50%.

Trenchev said users can then withdraw their loan in the currency of their choice, out of the 40-plus currencies Nexo currently handles. He said with its diverse currencies and availability in 200-plus jurisdictions around the world, the company is a truly global and borderless enterprise.

Additionally, users only pay interest on the funds they withdraw to their bank account or spend with a credit line.

“And then, obviously once you repay the loan, your cryptocurrency gets released automatically and you can withdraw it,” Trenchev said. “If it has risen in value, you profit from that.”

Nexo’s next big development will be the Nexo Credit Card, which Trenchev said differs from other cryptocurrency credit cards in that it doesn’t actually access the user’s cryptocurrency holdings directly.

The Nexo Credit Card will offer competitive features and allow users to access their cryptocurrency value without selling it.

Trenchev said there are currently a lot of great credit cards with high-quality services available, so if a company wants to compete in that space it has to provide all the cutting-edge features that people have come to expect from a credit card.

“So, what we’re looking to do is offer the best card possible,” he said.

For Nexo Credit Card customers, perks include no fees for transactions on the foreign exchange, the ability to convert between currencies with no fees or conversion rates, and access to the Nexo Credit Card mobile app with finance tracking features and top security implementations.

“We are aiming to do for the crypto space what Revolut did to the overall, traditional financing space,” Trenchev said.

The card also comes with 24/7 fraud monitoring and live assistance. Additionally, there are no monthly or annual fees. And cardholders have multiple repayment options available, including fiat currencies and crypto options.

Trenchev said Nexo is finalizing the Nexo Credit Card details and hopes to make an official announcement soon. For the latest information, visit the Nexo website.

As innovators continue to find new ways to apply blockchain and cryptocurrency-related technology to new innovations, Nexo appears to be leading the way in the crypto lending market.

Trenchev said once the Nexo Credit Card is launched in the near future, the company will be focusing its efforts intensely on expanding the list of cryptocurrencies that it accepts.

“We’re going to be adding Litecoin and Bitcoin Cash, and as many as 10 more cryptocurrencies by the end of the year so that we can service an even larger portion of the crypto community,” he said.

Blockchain Expert on the Tech's Potential in the Finance Industry

KICKICO Users Can Invest in ICOs in a Safe Ecosystem