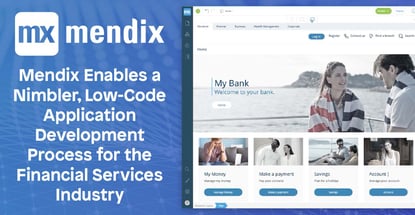 In a Nutshell: Financial institutions in today’s marketplace are only as competitive as their software and applications are efficient and user-friendly. In the meantime, procuring top-level developers and having time and money to put into extensive projects are becoming increasingly challenging. Mendix helps solve this problem by delivering a low-code app-building platform to its clients. Not only does Mendix make app building much simpler by removing the need for deep coding knowledge, but companies can also build and deploy apps cheaper and faster. Mendix also makes it easy to learn how to use the platform with tutorials and abundant resources on its website.

In recent years, ABN AMRO Bank, the Netherlands-based bank that traces its roots as far back as 1765, was dealing with several decades of backend legacy applications built one on top of the other.

The programs — added one by one to serve the bank and its customers — had reached the tipping point where the crisscrossing solutions were holding progress back more than helping it move forward in today’s modern banking world. As a result, the customer experience was suffering and the bank wasn’t always keeping up with its competitors.

Then, the bank discovered Mendix, an easy-to-use enterprise solution that brings big institutions like ABN AMRO into the modern era by helping them do away with clunky legacy systems.

Mendix provides a low-code app-building platform that allows developers at all levels to design, build, and launch effective apps without having to put in countless hours and funds to keep up with — and surpass — the competition.

“ABN AMRO is on track to have, by the end of this year, around 200 applications live on the platform, mostly winding out that legacy system,” said Mark Manning, Senior Manager for Product Marketing at Mendix. Additionally, the financial institution held a hackathon earlier this year and with the help of Mendix, created a production-ready, mobile version of PCMN, a highly used desktop application that facilitates trades.

This is just one of literally thousands of instances in which Mendix has helped a company deliver a modern, low-code solution to the marketplace. And the finance industry is just one of many markets where Mendix is helping companies wield technology to the benefit of organizations and their customers.

We recently spoke with Manning as well as Nick Ford, Mendix’s Chief Technology Evangelist, to learn more about the company’s app-building platform and the many ways it can service companies and developers in today’s fast-moving ecosystem.

“Fundamentally, the core of what we do is enable multiple stakeholders to participate in the development of software,” Ford said. “That can be as simple as personal solutions running on mobile devices or it could be companies like the Business Development Bank of Canada running huge loan origination systems with metrics.”

He said this approach is as much about encouraging collaboration as it is about making software development simpler, more intuitive, and easier to get involved with.

“We founded Mendix to solve our personal frustration with the complexity of custom software development, which is siloed, slow and consistently fails to deliver intended business results,” according to the Mendix website. “We believed deeply we had to fundamentally reimagine and elevate the traditional roles played by Business and IT teams in the app development process.”

And this is mostly achieved through Mendix’s low-code solutions. To the newcomer, low-code may sound like some kind of technical and sophisticated development technique.

But low-code actually means just what it says — not a lot of coding knowledge is necessary to make Mendix work.

“Low-code is a visual development approach to application development,” according to the company. “Low-code enables developers of varied experience levels to create applications for web and mobile, using drag-and-drop components and model-driven logic through a graphic user interface.”

It essentially opens up the world of app development to anyone, regardless of their coding knowledge.

“Access to skilled resources — deep software engineering — is getting harder and harder,” Ford said. “The big organizations, the Googles and the Facebooks of the world, are sucking that talent out of the market. Therefore, companies are looking for better and easier ways to leverage the resources they do have access to.”

He said that, once you remove the complexity of coding, it allows companies and individuals to focus more on building the apps, and with Mendix, sharing a visual model on the screen to quickly and easily bring in multiple stakeholders.

Mendix Boosts Productivity and Decreases the Time to Market for Apps

As demonstrated with ABN AMRO’s hour-hour development of its mobile trading app, Mendix not only simplifies app development but it also saves companies time and money in the process.

He said that’s because not only can companies enable and build much more productively, but they can do so with smaller team sizes.

“A big Mendix team delivering a fairly significant application in Mendix is probably four to six people,” Ford said. “And they’re going to deliver software within days rather than weeks. And the collaborative nature means that organizations can now test and learn, and they can launch new products so quickly, that the cost of doing that is not prohibitive anymore.”

Ford said a good example is when insurance carrier Zurich launched a face quote application that allows users to receive a life insurance quote based on a selfie. The program assesses certain characteristics, such as age, about the applicant based on the photo.

He said the app was built in about 10 days and was on the market just four days after it was built.

Mendix Comes with Little to No Learning Curve

Perhaps one of the most appealing characteristics of Mendix is not just the fact that it’s easy to build and deploy apps, but it is also very easy to learn how to use.

“We put a lot of time and effort into that,” Ford said. “So, first of all, what I want to say is Mendix are the products. The platform is completely free. There are no limitations to the level of functionality. So, for any organization that wants to adopt our platform, they can sign up today for free. And that’s not a limited platform. It’s a full capability version with sandbox.”

Ford said the company will then ask a few questions to assess the skill level of the person using Mendix. Based on the answers, the company will drive an onboarding experience that’s a combination of in-platform tutorials that guide the user through the process of how to build his or her very first app.

Mendix makes onboarding easy with tutorials and resources, and guides users through the app-building process.

“So, within 20 minutes of setting up the platform, you build your own app, you deploy it to your own cloud, which is actually running in our public cloud and that’s completely free,” he said.

Mendix also makes an abundance of resources available on its website to help users develop different skills as they progress within the platform. He said Mendix also provides guardrails to help keep new users on the right track, should they need assistance.

“The free edition includes everything you need to design, build, and deploy demos, prototypes, or small applications,” according to the website. “It includes a deployment environment for each application with unlimited users. You’ll want to upgrade to a paid plan if you will have more than 50 concurrent users, rely on batch imports of data, or need to use deep links.”

For its paid plans, Mendix offers the Single App, Professional, and Enterprise options and pricing begins at $1,875 per month, billed annually.

Although certain sectors of the finance industry embrace new technology and deploy it as soon as possible, other areas, such as large, established institutions, have faced challenges when it comes to effectively implementing tech trends to improve the business.

But with Mendix, institutions can now build and deploy visually appealing, and easy-to-use apps right alongside the latest startup.