LocalMonero Allows Users to Buy and Sell Cryptocurrency on a P2P Platform That Works with Any Exchange Medium, Including Cash 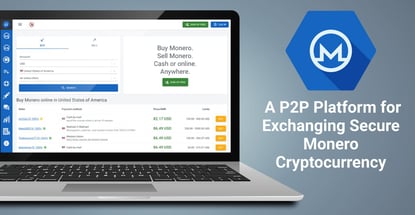 In a Nutshell: LocalMonero has emerged as a go-to platform for exchanging Monero cryptocurrency for any other currency, including cash. That is important, as fungibility — the fact that every dollar is worth the same amount — is crucial to the viability of a currency. But some cryptocurrencies, including Bitcoin, aren’t fungible, and crypto exchanges can blacklist or even freeze individual coins, lowering their value. That’s why LocalMonero has risen with an innovative model that links fungibility with the privacy of cryptocurrency.

People use cash and credit cards for purchases every day. But enabling easy transactions is a significant hurdle facing cryptocurrencies, including Bitcoin, as they struggle to gain traction in the financial marketplace.

One problem with Bitcoin is that it’s transparent and every transaction resides on the network’s public blockchain. While user identities are supposedly kept private, software forensics can often easily infer ownership of individual coins and reveal associations with illegal or unsavory activity.

The next time you hold a dollar bill in your hand, consider how it was spent in the past. There’s no way to truly know. But even if it was used in some sort of illegal activity, the law stipulates that its value holds for you, no matter the history it may have. That is known as fungibility.

That’s not the case with Bitcoin, as each coin has a history that can be used against it. Crypto exchanges can blacklist individual coins, and regulators may even seize coins suspected of having been obtained illegally. The result is that freshly mined cryptocurrencies sometimes carry a premium price.

That’s no way to create a next-generation monetary system. So a growing constituency of cryptocurrency advocates has turned to Monero, a privacy-focused crypto created in 2014 that uses a variety of technologies to obfuscate transactions on its network.

Because Monero is private and untraceable, it’s fungible. And for users who want to buy into Monero — and be part of its mission — LocalMonero is a popular exchange.

Unlike centralized exchanges that oversee conversions between Monero and cryptos like Bitcoin, LocalMonero works on a P2P basis and facilitates exchanges using any currency, including cash.

“If you want to avoid leaving an irreversible trace on a blockchain, or you want to convert your cash directly into Monero, that’s what we provide,” said Alex, LocalMonero’s Co-Founder.

With a market cap in the neighborhood of $1 billion, Monero isn’t some flash in the pan.

“It’s the biggest and most prominent cryptocurrency with an opaque ledger,” Alex said. “That’s what attracted me and it attracts others who see the lack of privacy in Bitcoin.”

“Our mission is to provide a platform for people to buy and sell Monero using any fiat currency — or any other thing they might want to sell it for,” Alex said. “We even have gold as a payment method.”

The fact is that people in many parts of the world who may want to use crypto don’t have centralized exchanges available to them.

Consumers who live in places with underdeveloped financial systems, for example, can use LocalMonero as a cash-based crypto on-ramp. The same goes for people who live in restrictive countries where exchanges aren’t allowed to operate.

“The only thing that’s left there is peer-to-peer trading,” Alex said.

On LocalMonero, buyers and sellers can post advertisements specifying their preferred method of payment. Along with cash and gold, the site supports bank transfers, online payment processors like PayPal, and even gift cards.

“It’s a wide array of options, and it depends on what’s most convenient for the user,” Alex said.

After users make a connection, LocalMonero escrows Monero from the seller, releasing it to the buyer only after the seller confirms receipt of payment. The platform will also step in and mediate any disputes that may arise.

“With crypto, you have to bear the responsibility for your safety,” Alex said. “LocalMonero takes that to the next level.”

LocalMonero works on any device, and users only need an internet-connected browser and access to a postal system. For those interested in seamless censorship-resistant communication with the platform, I2P and Tor functionality is also available.

And the exchange is one of Monero’s biggest supporters. Monero attracts users who see it as a step forward in the evolution of money. Community features built into LocalMonero ensure users have ample opportunity to learn about Monero and build enthusiasm for its use.

“We have a high level of community engagement,” Alex said. “We have our own Telegram group where people give us suggestions and criticisms. We also often get messaged on the Monero subreddit, which is probably the biggest Monero community in the public eye. Everybody knows us there — we’re a household name.”

On LocalMonero, getting started with Monero is easy. The platform also provides forums where new users can post questions and receive pointers and tips.

On a more general level, LocalMonero acts as a news aggregator for Monero, posting summaries of significant developments with the currency, and outlining future plans. It also operates an extensive knowledge base covering Monero fundamentals and addressing issues of importance.

“Our job is to provide a way for people to educate themselves,” Alex said. Still, in its developmental phase, the knowledge base is accessible to a broad base of users and includes illustrations that make the articles look attractive on social media.

Building a Bridge to Monero with AgoraDesk

LocalMonero aims to generate even more support for Monero by integrating it into Bitcoin exchanges. Its vehicle for accomplishing that is AgoraDesk, which supplies a Monero-style access point to Bitcoin users.

The motivation was to capture users in search of more discreet pathways into Bitcoin after established P2P exchanges “started making life difficult for their traders,” as Alex said.

“They were getting a more negative reputation over how they treated customers and randomly froze accounts and funds,” Alex said. “The beauty of those sites was always their simplicity and speed. And users didn’t need to go through multiple tiers of document uploads.”

Expanding into Bitcoin through AgoraDesk puts Monero and Bitcoin on the same level. “We think that through that sort of platform exposure, we can help more people discover Monero,” Alex said.

That can only be a good thing for users interested in seeing a crypto-based currency succeed fiat. Advocates argue that crypto has too many advantages to let lack of fungibility prevent it from winning.