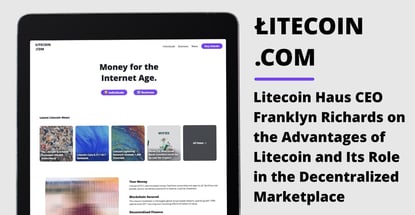 In a Nutshell: While Bitcoin is generally perceived as the gold standard in cryptocurrency, Litecoin is the silver standard by design. Litecoin was created by Charlie Lee to complement Bitcoin with more built-in flexibility. The altcoin may also appeal to businesses because of its faster transaction speeds and lower fees. We spoke with Litecoin Haus CEO and Litecoin Foundation Director Franklyn Richards about how Litecoin fits into the cryptocurrency ecosystem, its potential as a better form of money, and its passionate community of supporters.

“There’s no chance that the iPhone is going to get any significant market share — no chance,” said former Microsoft CEO Steve Ballmer in 2007, ahead of the launch of Apple’s foray into the world of mobile devices.

The same year, Apple CEO Steve Jobs had said his initial goal was to capture a 1% market share with the new cellphone. By the end of 2014, the iPhone had reached 48% market share in the world of mobile devices.

At some point, it becomes clear when new technology is here to stay.

Franklyn Richards is a Founding Director of the Litecoin Foundation and the Founder and CEO of Litecoin Haus.

Franklyn Richards realized cryptocurrency was here to stay in 2013, when he heard that the price of one Bitcoin had surpassed $100. Up until that point, he said he had maintained only a passing interest in the emerging world of digital currencies.

“I started doing some research and found the CoinMarketCap website and discovered there was a whole plethora of other coins,” Richards said. “I decided to dip my toe in the waters, but as a university student at the time, Bitcoin was too expensive for me and Litecoin was only $7.”

For Richards, that initial Litecoin purchase set the trajectory of his life in the intervening years. As he learned more about the early altcoin, the more convinced he became of its staying power and value that went far beyond a price listed on an exchange.

It wasn’t long before Richards reached out to Litecoin creator, Charlie Lee, and asked how he could get involved with the crypto.

Today, Richards is a Founding Director of the Litecoin Foundation and the Founder and CEO of Litecoin Haus, a private development company for the Litecoin ecosystem. He also runs the consumer-facing website, Litecoin.com. We spoke to Richards about how Litecoin stands apart from the increasingly crowded world of cryptocurrency and the strong community that supports it.

Intended to Complement Bitcoin as a Lighter and More Flexible Currency

When Bitcoin launched in 2009, the currency was meant to be used as a decentralized P2P payment system. Since then, the use cases for Bitcoin and the blockchain technology that powers it have proliferated.

Hundreds of cryptocurrencies have sprung up in the marketplace for nearly every niche imaginable. But Richards said most people are mistaken on where the value of blockchain technology actually lies.

Litecoin is meant to be the silver to Bitcoin’s gold in the decentralized world of cryptocurrencies.

“Companies have an idea that they are going to revolutionize the space; that their cryptocurrency is going to topple Bitcoin and bring blockchain into the mainstream but they are misguided,” he said.

Lee — a former Google and Coinbase employee — didn’t create Litecoin to compete with Bitcoin, but rather to complement it. He has said Litecoin is the silver to Bitcoin’s gold.

“(Lee’s) hope is not for Litecoin to overtake Bitcoin, but to have them work together through things like the Lightning Network and Atomic Swaps to provide a better overall ecosystem,” according to a Coin Central profile.

As with Bitcoin, Litecoin is an open-source, decentralized global payment network.

Richards said that, in his opinion, Bitcoin has been going down the correct development path with the addition of sidechains and other improvements. But it can be risky for Bitcoin to experiment with such refinements, which is where Litecoin comes in.

“Litecoin can test ideas that Bitcoin is not able to because there’s too much at stake,” he said. “We can be far more flexible and try things out in the space. With a network worth billions of dollars like Bitcoin, you can’t just be messing around with it.”

Richards said Litecoin is currently collaborating with Bitcoin developers on confidential transactions within the Litecoin network.

“We’re going to test it out in a very safe and measured way, and, if it’s successful, it will make its way to Bitcoin,” he said.

Businesses Can Benefit from Lower Fees and Faster Transaction Times

While Bitcoin and Litecoin are similar in a number of ways, key differences may make Litecoin more appealing for businesses that want to utilize cryptocurrencies.

Litecoin has the capability to process blockchain transactions faster than Bitcoin.

Richards said an increasing number of institutions are implementing the use of Litecoin because they are realizing the technology can better serve their customers and give them an edge over competitors.

“Litecoin powers billions of dollars worth of trade all over the world daily,” according to Litecoin.com. “Decentralized commerce empowers customers and businesses at all levels to transact without intermediaries, resulting in lower fees and quicker transfer times all whilst being secured by Litecoin’s multibillion-dollar network.”

While Litecoin’s fees have always been lower than those of Bitcoin, the Litecoin team recently announced that the fees in its latest release are a negligible 0.0001 LTC per kilobyte. Litecoin can also sustain more transactions in a reasonable amount of time.

“The Litecoin blockchain is capable of handling higher transaction volume than its counterpart – Bitcoin. Due to more frequent block generation, the network supports more transactions without a need to modify the software in the future. As a result, merchants get faster confirmation times, while still having ability to wait for more confirmations when selling bigger ticket items.” — Litecoin.org.

Still, Litecoin adoption is very much driven by its users, Richards said. The organization can’t force people to use the cryptocurrency, but it is the Litecoin team’s job to encourage people to use it and work with businesses to help them implement it.

This sentiment echoes Lee’s statements regarding cryptocurrency in general, that a cryptocurrency’s price is not the most important factor, but rather, the usage and adoption rate that determines the success of any crypto.

“The average person doesn’t care about cryptocurrency any more than fiat,” Richards said. “If they can make money trading, that’s a draw for them, but they flee when the price drops.”

Just as Richards was impressed with Litecoin’s potential and decided to put his time and energy toward supporting it, the digital currency has attracted a wide base of enthusiasts and volunteers in recent years.

Litecoin’s team of active members has grown from just a handful of members in 2013 to more than 100 today.

“We’re all working in a volunteer capacity because I think we understand that Litecoin is something bigger than ourselves,” Richards said. “That’s a mentality that’s not often shared in the crypto space — with the exception of Bitcoin — where people actively go out of their way to try and make it better because we are ideologically shifted in that way.”

Litecoin is supported by a passionate team of volunteers and an active online community.

Richards sees a lot of cryptocurrencies spring up that are built around supporting a single company that is simply trying to make money, he said. And these models are not sustainable because, for the companies, it’s just all about pushing up the price of the crypto.

“Whereas, the Litecoin community is very driven by the end goal of creating a better form of money and helping to advance the world in a meaningful way,” he said.

Litecoin is also supported by an active and vocal online community of users.

“The community-run Litecoin subreddit that originally launched in late 2012 has just crossed a major milestone of 200,000+ subscribers, a 10x increase from two years ago,” according to an announcement from Litecoin.

Lee also actively engages with the Litecoin community via Twitter and other online forums, providing updates, relevant announcements, and general commentary on Litecoin and the cryptocurrencies ecosystem.

Hosting the Second Litecoin Summit and Pursuing Confidential Transactions in 2019

The Litecoin Foundation is gearing up to host its second Litecoin Summit in Las Vegas in October. The summit is part of the larger Vegas Blockchain Week, which will bring thousands of blockchain and crypto supporters to the Nevada city.

Richards said the summit is a way for the nonprofit Litecoin organization to raise money to continue its development efforts, as well as to further engage in the crypto community.

The other big news, as Richard mentioned, is the fact that Litecoin is exploring how to implement confidential transactions on the blockchain, which Lee announced on Twitter in January.

“Fungibility is the only property of sound money that is missing from Bitcoin and Litecoin,” he wrote. “Now that the scaling debate is behind us, the next battleground will be on fungibility and privacy. I am now focused on making Litecoin more fungible by adding Confidential Transactions.”

Through the MimbleWimble protocol, users will have the option to add an extra layer of security by obfuscating their Litecoin transactions.