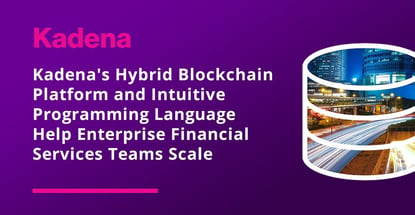 In a Nutshell: The jury is still out on whether blockchain technology is secure and scalable enough to meet enterprise needs. That’s why Kadena engineers developed solutions for platform design and programming accessibility to foster widespread adoption. Kadena’s hybrid public-private blockchain leverages multiple proof-of-work networks to scale throughput. The Pact programming language enables tech novices to understand smart contracts while protecting against bugs and exploits. Together, Kadena’s innovations result in a simple, fast, and more secure blockchain experience for scaling enterprises in a host of sectors, including financial services.

For all its promise, blockchain technology has struggled to deliver advancements in scalability and security that would lead to enterprise adoption, especially in the financial services industry.

Blockchains like the one housing Bitcoin, which uses a secure but energy-intensive proof-of-work (PoW) consensus mechanism for validating transactions, have not demonstrated the ability to generate enterprise-level throughput. And while platforms using the rival proof-of-stake theoretically produce higher transaction rates, they often require outside security.

Smart contracts, predominantly on the Ethereum blockchain, have been developed as a way to automate decentralized transactions. But their complexity limits enterprise-scale use cases from a security and compliance perspective.

The financial services industry — and many other enterprise-level businesses — need a platform capable of mitigating the scalability issues of PoW and simplifying the programming and administration of smart contracts. Kadena, founded and led by two JPMorgan alumni, stepped up to solve these problems for enterprises. Kadena brings all the inherent advantages of blockchain technology without compromising speed, safety, or simplicity.

“Our core innovation is that we’ve worked out how to scale Bitcoin’s consensus model without switching over to something completely new,” Co-Founder and CEO William Martino said. “On top of that, our human-readable Pact smart contract language is accessible enough for lawyers and executives to understand and design around.”

According to Martino, early public blockchain networks like Bitcoin and Ethereum weren’t built to serve as enterprise tools — especially not for the transaction-heavy financial industry. But Martino and Kadena Co-Founder Stuart Popejoy bring more than three decades of combined fintech experience to Kadena.

“We come at this after having worked extensively on financial systems,” Martino said. “We know what they need, and that’s why we designed our system the way we did.”

As part of an emerging technology group at JPMorgan, Martino and Popejoy collaborated on Juno, the firm’s first blockchain. Martino came to that task after working for the SEC as lead engineer for a quant group and serving as tech lead for that agency’s Cryptocurrency Working Group.

As a private blockchain, Juno was designed for internal use only. Martino and Popejoy realized that taking the technology forward required an efficient way of interfacing with a public blockchain.

“The only way to do that was to develop a hybrid solution — a private blockchain that can do all the things you need, and a public blockchain that fully interacts with the private chain but also brings industrial capacities to the table,” Martino said.

The team founded Kadena in 2016 and introduced its Kuro private solution in 2018. Kuro is the first permissioned blockchain that can scale to thousands of nodes. It achieves throughputs of up to 8,000 transactions per second with very low latency while maintaining on-chain privacy.

“We figured out how to run more than one blockchain in the same network,” Martino said. “Each chain has the transactional capacity, but the energy needed to run the network is the same as if it was just one chain.”

Enterprises benefit because there’s no limit to the number of chains that can run concurrently on Kadena. In every other way, the network is as secure, open, and anonymous as Bitcoin or any other PoW platform.

Enterprises can efficiently run smart contracts on the Kadena public chain while linked to private and permissioned nodes on the Kuro side. The combination enables all the efficiencies of public PoW blockchains while preserving the control and security of a private network.

“That’s how we’re going to scale up public blockchains and service real use cases for real people, not just crypto believers,” Martino said. “And we’re the first to deploy a solution that satisfies this.”

That leaves the challenge of smart contracts. Technology for achieving fully decentralized, automated transactions is compelling. But smart contracts as manifested on Ethereum are opaque to non-technologist executives and regulators — and their lawyers.

“When we looked at Ethereum, we realized this isn’t going to work for enterprise use cases — they’re going to run into these issues where people just lose money because the way you build and interact with smart contracts is too unsafe to ever put any real value behind it,” Martino said.

Kadena’s Pact smart contract programming language solves that problem. “It’s what sews everything together,” Martino said. “The cool part is that it’s human-readable. Normally with blockchain, everything is in binary — you can’t read it. We think it’s important that you can read the smart contract code.”

Pact was tested on Kuno for years before going on the public network and includes tools to protect smart contracts against internal flaws. Automatic property-checking enables programmers without a technical background in formal verification to mathematically prove their code is safe from attacks.

Kadena: Offering Transparency to Everyone Who Uses the Financial System

All of Kadena’s innovations add up to a network that was future-focused before the future was entirely in sight.

“Even back in the day of JPMorgan, we envisioned a platform that would enable the head of risk at a corporation to audit a smart contract in 2025 or 2030,” Martino said. “It’s how we designed it. By 2030, it’s going to be a thing that’s widely used daily, even if people don’t realize it.”

Robustness and accessibility in a package that readily integrates with legacy infrastructure will allow financial firms and other enterprises to evolve beyond their current capabilities. Instead of positing a reinvention of finance like so many other blockchain startups, Kadena’s mission is to improve on the past.

“Finance has taken centuries to get to where it is, and there’s a good reason for the design of things,” Martino said. “So we don’t think we need to remake everything from scratch.”

In the wake of two major financial downturns within a decade, this is a time for financial institutions to introduce some of blockchain’s fail-safe procedures into their interactions with consumers, Martino said.

Kadena aims to automate finance, and blockchain and smart contracts allow institutions to create a transparent, auditable, and straightforward experience.

To that end, Kadena’s two-year partnership with USCF Investments is slated over the coming months to yield a crypto-native ETF product that will trade on conventional and online exchanges as well as on the blockchain.

“We’re excited to kick off this new kind of fund,” Martino said. “We’re merging the next generation of finance with the existing generation.”