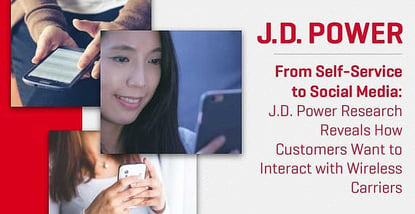 In a Nutshell: Consumer research leader J.D. Power recently released two studies on consumer satisfaction and attitudes toward smartphones and wireless carriers. The studies showed that today’s technology-equipped consumers increasingly use their smartphones to research products and make purchases. The surveys also identified social media and online videos as the preferred options for resolving issues and answering questions. At the same time, a significant number of customers still value an in-store experience with a courteous, informative associate. T-Mobile received the highest satisfaction rating among large full-service carriers, and customers with unlimited data also reported higher satisfaction, in general.

A new J.D. Power study illustrates just how much on-the-go shoppers rely on their mobile devices. The consumer respondents in the study indicated they preferred to use their smartphones to purchase smartphones and other wireless services.

“The wireless market is rapidly evolving into a self-contained ecosystem in which all aspects of the ownership experience — from buying the device to engaging with customer support — is done entirely from a mobile device,” said Peter Cunningham, the Technology, Media, and Telecommunications Practice Lead at J.D. Power. “While in-store customer service is still key for things like explaining data usage and demonstrating device operations, the speed and consistency of the experience delivered via mobile are clearly resonating with mobile customers.”

Peter Cunningham spoke with us about the results of J.D. Power’s latest study of wireless carriers.

The 13,344 wireless respondents in the Purchase Experience survey reported the highest overall customer satisfaction (857 out of 1,000 possible points) when purchasing new wireless devices using their smartphone.

“Driving their digital channels and allowing customers to purchase by tablets, smartphones, and laptops is important for wireless carriers,” Peter said. “That pertains not only to the purchase experience but to customer care and every way they interact with the customer journey.”

The study on customer care bolstered that point. Responses from more than 15,000 wireless customers who had contacted a carrier’s customer care department in the past three months showed social media and online videos as the preferred options for resolving questions.

At the same time, customers still valued an in-store experience with a helpful, educated associate. The overall satisfaction among customers purchasing online was highest among those who had visited a store before making a purchase.

Customers who preferred to purchase devices in-store valued the personal experience of receiving an explanation of the latest technology, advice on how to manage data usage, demonstrations of device operations and features, and details on what billing statements will include.

“Those are things that face-to-face interactions allow. They save the company time and money on the back end because a customer won’t then call in later and spend time on the phone with customer service because they don’t understand their bill,” Peter said. “That is very valuable time and money spent in the store — both from the company’s perspective and the consumer’s perspective — and delivers a satisfying experience.”

Peter said the two studies show that carriers need to remain focused on customer satisfaction to help them stay competitive.

The findings also highlighted valuable takeaways for the larger retail industry. Consumer satisfaction is highest with businesses that have informative and friendly in-store associates, and self-service customer care is preferred.

T-Mobile ranked highest among five full-service carriers with 855 out of a possible 1,000 points and a Power Circle rating of 5, or “among the best.”

AT&T (839 points) and Verizon Wireless (833 points) received a Power Circle rating of 3 or “about average.”

The average score for full-service carriers was 838. Peter said J.D. Power data scientists concluded there was a statistically significant difference that separated T-Mobile from AT&T, which received the highest rating last year, and the rest of the carriers.

He said J.D. Power also sees more respondents who are T-Mobile customers, indicating that the carrier’s growth in the market is outpacing its peers. Further, T-Mobile has a growing customer base among two key demographics: millennials and ethnic minorities.

Customers rated MetroPCS highest among full-service carriers not requiring a contract, with 858 out of 1,000 points. MetroPCS, which also ranked first in the 2017 study, was the only one of the four full-service, non-contract carriers to receive a Power Circle rating of 5. Boost Mobile (853 points) and Cricket (849) received a Power Circle rating of 3 for “about average.”

The average score for full-service, non-contract carriers was 851.

Consumer Cellular (866 points) was the only non-contract, value carrier to receive a Power Circle rating of 5.

Today, wireless customers are using their smartphones to send messages, upload and browse photos and videos, search online, and run apps. But those activities can burn through data quickly, which is especially frustrating for people who have plans that cap their usage.

Not surprisingly, the 2018 Wireless Customer Care survey showed that respondents with unlimited data plans reported higher satisfaction — despite the fact they were paying more to receive that service.

“Customers with unlimited data plans are much more satisfied than customers with capped plans, even though they are, on average, paying more. Unlimited data definitely makes for a happier customer.” — Peter Cunningham, Technology, Media, and Telecommunications Practice Lead at J.D. Power

The findings revealed that customers with unlimited data plans experienced fewer problems with data, messaging, calls, and overall network performance than those with data allowances.

Customers with unlimited data had, on average, 11 overall network quality problems per 100 connections, while customers with data caps had an average of 13.

“Customers with unlimited data plans are much more satisfied than customers with capped plans, even though they are, on average, paying more,” Peter said. “Unlimited data definitely makes for a happier customer.”

J.D. Power is a global leader in consumer research, and its annual surveys of wireless customers provide significant insights for carriers. Peter said the firm surveys about 60,000 US wireless customers each year, and the findings are the results of a robust analytical study.

The major takeaway, he said, is that carriers have to do more to enhance the customer experience to survive and thrive in an ultra-competitive market.

The wireless industry has become so saturated that companies are all fighting over the same customers, which often means trying to steal them from each other. Since the industry is not seeing much growth, in terms of new customers or subscribers, companies are trying to outpace each other by making themselves more attractive to consumers.

“They’re trying to compete on things like the purchase experience, customer care, seamless digital interactions, and making sure store representatives are knowledgeable and polite,” Peter said. “It’s all about winning customers on those customer-experience-related areas. The customer stands to gain because companies have to focus on experience to win them over.”

Fluctuating Rates Not Necessarily a Negative for Homebuyers