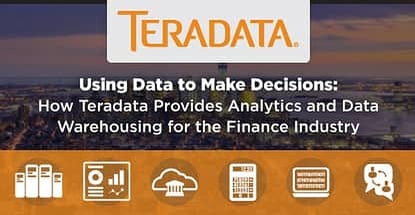 In a Nutshell: Since the dawn of digitization, every electronic transaction has created a wealth of data. For years, though, many of these digital trails, or data footprints, have been unusable. Today, the advanced technology and analytics of companies like Teradata are making it possible for many of the world’s largest institutions to turn Big Data into a big resource. Teradata provides the infrastructure and analysis needed to handle the constant flow of information. Their analytics can resolve millions of footprints into comprehensive consumer profiles, allowing companies to develop highly targeted product offers, as well as more accurately predict future behaviors, including potential fraud and changes in credit risk.

In the latter years of college, I took a number of courses in a particular lecture hall that had an entire wall of chalkboards. By the end of the class, both the floor around that wall, and whichever poor professor had been scrawling upon it that day, would be absolutely covered in chalk dust.

While in and of itself somewhat amusing (it often looked like a small snowstorm had hit the lecture stand), the most interesting result of the entire situation was often the trail of chalky footprints that could be found all around the building. On a good day, you could trace a professor’s path from the lecture hall all the way to his or her office, simply by following their footprints.

As with those chalky footprints, we each leave a trail of data footprints everywhere we go. When you pay a bill online or use your credit card to make a purchase, you are creating digital footprints — and lots of them.

“A single transaction will have 150 elements in it,” explained Will Griffith, a senior consultant with Think Big, a division of data storage and analysis company, Teradata. “Those elements all get stored in a table within an analytic platform like ours.”

Multiply those 150 elements by the thousands of transactions occurring at any given time in just the U.S., and you have literally millions of pieces of data generated every hour, just in purchases. It’s estimated a total of 2.5 quintillion bytes of data are produced every day.

The resultant conglomeration of nearly endless streams of data is commonly known as “Big Data.” Supported by advanced analytics from Teradata, many of the largest companies in the modern marketplace are using Big Data to determine everything from the ads you receive online and in the mail, to the spending limit of your new credit card.

“Most of the major — both domestic U.S. and global — consumer-orientated financial services use Teradata,” said Will. “We are an underlying piece of infrastructure that drives the majority of the analytic processes downstream.”

The Importance of Big Data in the Modern Marketplace

While the term Big Data has been a recent buzzword in mainstream media, the digital data stream has actually been around for as long as we’ve been digital. The information comes in two general forms: structured and unstructured.

“Credit bureau information, account information — that’s very structured data,” explained Will. “Because of the ecosystem that’s involved between the merchants, acquirers, networks, the issuers — that data is all very standard and well-known.”

Unlike the simpler, structured data types, the unstructured data can contain any of hundreds of formats or file types, including everything from web search histories, photo tags, and the continuous trail of your cell phone’s GPS. For years, the sheer amount of unstructured data limited its usefulness.

“During the initial roll-out of websites around 2000, a lot of that data was falling on the floor,” described Will. “It was data exhaust; the information wasn’t something that could be effectively stored — from a cost perspective — and the data was difficult to deal with.”

Eventually, as with other types of digital technology, collecting and manipulating Big Data became increasingly more affordable and significantly more advanced. As  a result, unstructured data has become as vital a part of consumer analysis as its structured counterpart — if not more so.

“Fast-forward 15 years — storage is now cheap, and the analytics have evolved so that stuff is now part of a typical toolkit of consumer analytics.”

In fact, a full 90% of the top commercial banks and 75% of the major global retailers use Teradata to collect — and analyze — the information within the Big Data stream. They rely on Teradata’s advanced analytics to develop in-depth consumer profiles — the likes of which influence most important decisions in consumer-focused areas like marketing, fraud prevention, and credit risk assessment.

“This is a legacy that we’ve been fortunate to have,” said Will. “Most of these firms have been running on our platform a decade or longer. They’ve basically built a lot of their business processes and their analytic capabilities around the underlying technology that Teradata provides.”

How Teradata Builds a Complete Consumer Profile for Stronger Marketing

As with the proverbial snowball rolling downhill, your complete consumer profile starts with a tiny kernel of information, which is used to present you with an offer that has the least probability of refusal.

“Starting with just a credit score, a Social Security number, and an address — perhaps acquired by a third-party bureau — the creditor would solicit an offer,” explained Will. He described, as an example, a credit offer for one year of free interest and a low APR for the life of the credit line (think credit card pre-approval offers).

“That offer is going to be based on data that they have acquired. They’ve analyzed it, and they’ve figured out a pricing strategy and a marketing strategy to try to turn that piece of data — that prospect — into an account.” Once you’re in the door, the little informational snowball starts rolling.

“If the person responds, and is interested, that person provides more information as part of the application process,” Will said. “With a much greater degree of precision, they’ll use the analytics to better define exactly what they will offer — that could be how much of a line of credit you’ll receive for 12 months no interest.”

Then, of course, you activate your credit and begin using it — and the snowball grows exponentially.

“You start seeing transactions that add more data — from this data, really for the first time, you can get some behavioral information,” said Will. “Where do they like to shop? When do they shop? What type of merchandise do they typically buy? Are they buying luxury goods, or household essentials, like groceries?”

According to Will, that unstructured behavioral information is the key to accurately predicting important future behaviors, such as potential for fraud or overall credit risk. It also allows companies to target users with increasingly customized offers. The larger the snowball, the more accurate the analytics.

“Maybe you’ve used that [initial offer] as a starting point, and now you have multiple products in the hands of that consumer, all adding very valuable information,” he said. He described the ideal data relationship as being multi-faceted, with behavioral data coming in from multiple sources on each consumer.

“For example, if the customer has a consumer checking account as well as a credit card, you can determine patterns of deposits,” Will explained. “If there’s a change in the patterns of those deposits — maybe a big bonus check — maybe it’s time to talk about wealth management.”

“All of this feeds into a better understanding of the profile of this consumer,” said Will. “There are a lot of things that can be detected, from a behavioral perspective, that are very valuable through the life of the relationship.”

A New Toolkit for Data Analytics

Just like chalky footprints trailing from a lecture hall, you create trails of digital footprints everywhere you go — and everywhere your money goes. While those footprints were about as useful as a chalk trail when the digital revolution began, they’re now a veritable treasure map to Teradata and their clients.

“The intent is to better understand the behaviors that can now be exposed through some of these new big data types,” explained Will. “The predictive side of behavioral analytics is very, very important to credit risk assessment and other forms of risk management.”

While Will said the smaller companies are unlikely to have the ability to take advantage of Big Data anytime soon, the larger firms are clamoring to take the lead in the information arms race.

“We’ve seen great interest from the larger firms in our advanced analytics capabilities, delivered through our Aster application,” he said. “It combines multiple different genres of analytics. Five years ago, the toolkit was only SQL and statistical analysis; if that’s all you have in your toolkit today, you’re at a serious disadvantage.”

Brittney Mayer is a contributing editor for CardRates.com, where she uses her extensive research background to write comprehensive consumer guides and in-depth company profiles. Leveraging her vast knowledge of the financial industry, Brittney’s work can be found on websites such as MarketWatch, US News & World Report, NBC News, Kiplinger, National Foundation for Credit Counseling, TheSimpleDollar.com, BadCredit.org, CreditSoup.com, and CreditCards.com, among others. Brittney specializes in translating complex financial jargon and ideas into readable, actionable advice on lending best practices.

How Charity Navigator Helps Donors Make the Most of Their Deductions

Juniper Research: AI Will Deliver Savings to the Financial Industry