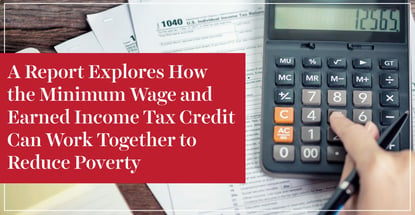 In a Nutshell: With income equality and wage stagnation presenting major challenges to low- and middle-income households, a recent report from the Economic Policy Institute explores how existing policies can help alleviate these problems. In the report, titled “The EITC and minimum wage work together to reduce poverty and raise incomes,” experts Ben Zipperer and Jesse Rothstein propose how the Earned Income Tax Credit and the federal minimum wage can complement each other to fight poverty. Zipperer said that experts have traditionally looked to one or the other as a solution but have not noted how the two policies can work together for the benefit of low-income Americans. The study also addresses how previous data may have fallen short in estimating the EITC’s impact.

A single parent working full time at today’s federal minimum wage rate of $7.25 per hour would earn an underwhelming $15,000 per year — not nearly enough to support a family in today’s world.

Unfortunately, stagnant wages and income equality have become increasingly pressing challenges for low- and middle-income workers in the U.S. Economic experts, of course, have explored numerous avenues for how to help alleviate the financial burdens of these households.

The most-discussed tactics include raising the minimum wage or bolstering the Earned Income Tax Credit (EITC). While experts debate the pros and cons of each of these approaches, they have tended to look at these as either/or options and not policies that could work hand in hand to reduce poverty.

“It’s well understood that income inequality is a severe problem in this country, and there are lots of different forms of income inequality,” said Ben Zipperer, an expert with the Economic Policy Institute. “And, one of those forms is that people at the bottom of the income distribution aren’t being paid enough or it’s difficult for them to find jobs to sustain themselves and their families throughout the entire year.”

Zipperer, along with Jesse Rothstein from the Institute for Research on Labor and Employment at the University of California, Berkeley, recently published a report with the Economic Policy Institute exploring how minimum wage and the EITC may work together to alleviate poverty.

“Because it is a large problem, you kind of want to look at as many policies as possible that we gave,” Zipperer said. “You want to have as many arrows in the quiver as possible, in order to attack that problem and reduce it.”

Zipperer said one of his areas of expertise is minimum wage policy, and Rothstein is one of the country’s leading experts on the Earned Income Tax Credit. The two academics decided to bring their backgrounds together in “The EITC and minimum wage work together to reduce poverty and raise incomes.”

The Fair Labor Standards Act established the federal minimum wage in 1938 with the purpose of setting a floor to how much a worker is paid on an hourly basis, according to the report.

“Because the minimum wage directly raises wages for those workers who otherwise would have earned less than the minimum, and because it also has indirect effects on wages a bit above that level, the low real value of the minimum wage has increased inequality between low- and middle-wage workers,” writes Zipperer and Rothstein in the report.

In light of the lack of movement in the minimum wage, some states and municipalities have taken it upon themselves to set higher minimum wages for their regions.

While a federal minimum wage of $15 — a commonly proposed rate — would certainly be helpful, it would barely be enough to bring a family of four above the poverty level, according to the report.

“The Earned Income Tax Credit represents a different strategy for raising incomes,” write the report’s authors. “The EITC is a refundable tax credit available to low-income families and very-low-income individuals who have a positive earned income. Eligible households receive a net tax refund that supplements their earnings.”

The value of the EITC can be substantial, adding up to 39% to pretax earnings. This can also bring some low-income households just above the poverty line.

“So, what is the most effective policy to actually improve the lives of low-income families?” Zipperer asked. “That was kind of the motivation for this piece — to pick basically two very important policies we have in the United States where research into both has shown that they really reduce poverty.”

A Prediction for How the Two Policies Can Complement Each Other

Zipperer explained how in the past, economic experts have tended to gravitate toward either raising the minimum wage or bolstering the Earned Income Tax Credit to address income inequality and poverty rates.

“This paper proposes how, rather than choosing one or the other, these policies can work together to boost wages and fight poverty,” he said. “People really hold on to one policy and not the other and we would like them to recognize they are much more effective in combination.”

Zipperer and Rothstein’s report notes that the either/or mode of thinking about these policies is a misconception. The authors go on to explain just how these two policies may be more effective in tandem than individually.

“The EITC aims to supplement market earnings but risks being diluted if low-wage employers react to it by reducing wages,” according to the report. “A sufficiently high minimum wage can prevent this dilution, ensuring that low-wage workers receive the full benefit of the EITC.”

This figure shows the labor supply effects of EITC in a perfectly competitive labor market, according to the report authors.

Looking at it from another angle, since the minimum wage can’t plausibly be raised high enough to produce a livable income for many families, the EITC can work as a useful supplement to raise earnings to more livable levels.

“The evidence is overwhelmingly clear that the EITC is a successful, effective policy,” according to the report. “While simple, theoretical models indicate that work-promoting policies like the EITC can be somewhat diluted by changes in market wages, allowing employers to capture some of the benefits, our understanding of these effects is at a very early stage.”

The researchers posit that any dilution to the EITC’s impact is minimal, however.

“Moreover, to the extent that incidence considerations are important, the minimum wage is an effective complement that limits any dilution and ensures that workers retain larger shares of the EITC,” the report concludes.

The Report Explores How Previous Research on These Issues Falls Short

To help support their proposition, Zipperer and Rothstein, addressed how earlier research into the effectiveness of the Earned Income Tax Credit and the federal minimum wage fell short in a number of ways.

The models commonly used to estimate the impact of the EITC have several shortcomings that make the true effect of the EITC difficult to accurately determine, according to the report, including using data from the mid-1990s.

The EITC and minimum wage should be used in a complementary way to help alleviate poverty, according to an Economic Policy Institute report.

“First, because many states and localities have raised the real value of their local minimum wages since 1993, many more EITC workers are paid the minimum wage than in the 1990s,” according to the report.

The researchers write that the overlap between the minimum wage policy and the EITC policy is much greater now than it was in the 1990s.

“Second, over the last decade, economists and policymakers have increasingly come to recognize that the perfectly competitive model of the labor market that has been used to understand incidence is vastly oversimplified and can yield dramatically incorrect predictions,” the report states.

Additionally, the current analyses of the EITC’s impact are constructed around a model that primarily benefits single parents.

“Recent proposals would expand the EITC for childless workers,” according to the report. “This would likely strengthen the interaction between the EITC and the minimum wage, making the two more complementary.”

A recent, unpublished paper also calls into question the notion that the EITC has meaningful effects on the labor supply, the report states.

“Finally, the simple incidence model assumes a full employment economy — one in which supply and demand balance perfectly,” according to the paper. “The experience of the last decade belies that assumption: We were below full employment for a full decade following the onset of the Great Recession.”

“The EITC and minimum wage are both effective policies to reduce poverty and raise incomes, and should be seen as complements rather than substitutes,” the authors write in the paper’s conclusion.

And while Zipperer’s and Rothstein’s research is based on their expertise, data, and economic models, their hypothesis is proving true in several real-world uses.

“Though the political system often sees the EITC as an alternative to the minimum wage, incidence considerations suggest that they may be best used together,” according to the paper. “In fact, all six states that expanded their state-level EITCs in 2019 also already have or will have state minimum wages that are significantly above the federal floor.”

RateHub™: Top Rates on Financial Products to Help Canadians Save