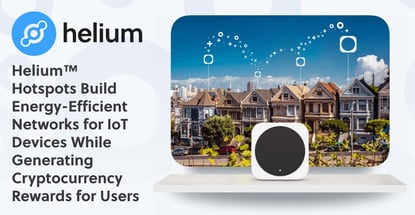 In a Nutshell: As businesses seek to link more everyday devices to the internet of things (IoT), the need for reliable, low-bandwidth connectivity continues to grow. The problem is that the telecommunications companies have been unable to meet that demand affordably. But Helium has developed a model that gives consumers the power to scale up IoT on their own. Individuals can deploy energy-efficient Helium Hotspots in their homes to build networks that accommodate low-bandwidth devices — circumventing wifi and expensive cellular connections in the process. In return, those hotspot owners set themselves up to earn Helium cryptocurrency as a reward for all of the connections they foster.

Consumers pay $100 or more to telecommunications companies each month for the privilege of accessing the internet to stream videos and send messages to their friends. They may also pay bills and get a little work done, too.

But there’s a whole world of potential that those traditional carriers aren’t reaching — the internet of things (IoT). Connecting the myriad objects people use in their everyday lives to the IoT promises a wealth of new opportunities and efficiencies for businesses — and convenience for consumers.

Expensive traditional carrier connections create a substantial cost burden for businesses looking to leverage IoT. And, in a way, telecommunications services are too advanced for the needs of IoT.

Unlike consumers who require bandwidth to stream videos, typical IoT devices only need to transmit a small amount of data at any given time. Imagine, for example, a sensor hidden in a bike that only has to do one thing — periodically report the bike’s location to protect against theft.

Helium is the brainchild of Napster Founder Shawn Fanning and his friend from the gaming industry, CEO Amir Haleem. And, by leveraging technology that’s more appropriate for the task, the company has a plan to make IoT connections faster and more cost-effective than what carriers offer.

That technology includes Helium Hotspots, hardware devices that aim to create a global, low-bandwidth network for IoT devices. And the Hotspots reward users for connecting devices with cryptocurrency.

“The traditional way telecommunications companies build networks requires billions of dollars and a decade to learn how to do it across the U.S.,” Helium COO Frank Mong said. “We decided that with the right business model and the right incentives, the best way to scale an IoT network was to get individual consumers to build it themselves. And that’s exactly what we’ve done.”

Helium’s vehicle for scaling IoT is the Helium Hotspot, which customers connect to the internet in their homes via wifi or ethernet. They look a lot like the wifi routers most Americans have in their homes today, but the technology behind them is different.

To disperse connectivity across environments, Helium Hotspots use Helium’s open-source LongFi wireless protocol. Unlike wifi, which allows devices to connect or communicate within a few hundred feet, or Bluetooth, which barely works across the span of a room, LongFi offers miles of range. In fact, it only takes a few hundred Helium Hotspots to blanket an entire large city with an IoT connection everyone can share.

LongFi enables bi-directional communication over the sub-GHz radio frequencies it uses, so businesses connecting to the network can push commands to their sensors and receive data back from them. Devices emanating from all businesses connect to the same open network wherever coverage exists, with the protocol handing off devices from one Hotspot to another as they move through the network.

And as more and more of the Hotspots come online, the blanket of connectivity spreads. Business cases for this type of network abound.

“We’re mostly focused on connecting devices outside the environments of homes and offices,” Mong said. Helium has partnerships with users ranging from enterprises like Nestlé, which deploys sensors in the water coolers its beverage delivery service supplies to homes and businesses, to the small startup Agulus, which uses IoT to automate farm irrigation systems.

“For us, it’s about focusing on tracking and tracing,” Mong said. After getting the network up and running in Austin, Texas, in mid-2019, Helium is now working in more than 745 cities across 49 states with sales in all 50 states.

Leaving the value proposition for businesses aside, consumers also have an incentive to purchase and install a Helium Hotspot.

In addition to dispersing connectivity via LongFi, each Helium Hotspot also serves as a node in Helium’s blockchain network. That network enables transactions using Helium’s own cryptocurrency token. And those tokens power a reward system on the platform.

The blockchain community is well known for bolstering the disruptive potential of cryptocurrency. Helium chose to pilot its network in Austin, in part, because that community has a strong base of both new technology adopters in the IoT world as well as crypto enthusiasts.

Helium Hotspot owners earn cryptocurrency based on the number of IoT devices they connect.

Businesses that use the network fund that system by converting Helium tokens to inexpensive data credits that carry a fixed price in U.S. dollars. When tokens are converted to credits, the supply of tokens decreases. That sets up an environment where the tokens can appreciate in value.

“We’ve asked our customers, and six out of 10 tell us that the top reason they’re buying a Hotspot is so that they can be like the owner of a telco,” Mong said. “They feel like they’re buying a Helium Hotspot to compete with the Verizons and AT&Ts of the world. They’ve got skin in the game.”

As momentum continues to build in the Helium ecosystem and coverage increases in large and small localities alike, more and more businesses are turning to Helium to power their IoT ambitions. Pricing is transparent, the administrative burden is minimal, and connecting is consistent throughout jurisdictions.

“Although we’re currently based exclusively in the U.S., we’re trying to build a ubiquitous global network to link IoT devices easily and seamlessly,” Mong said.

That’s why Helium is going to great lengths to build additional partnerships and keep the momentum going. Asset tracking — which includes tracking scooters, skateboards, bikes, and even cars — presents a plethora of new opportunities in the sharing economy.

Helium COO Frank Mong spoke with us about how the company’s network of Hotspots can help businesses and consumers.

The upscale apartment rental firm Stay Alfred is working with Helium to monitor occupancy status and space utilization in its properties. And Helium also powers smart pet collars by InvisiLeash that can track the location of a lost animal in real time over distances of many miles.

“Tracking small valuable things like that is another use case that is really important for Helium,” Mong said.

Meanwhile, documentation on everything that goes into the Helium ecosystem is available to developers looking to build something new. Open-sourcing occurred in late 2019, ahead of schedule.

“That was a direct response to just the overwhelming demand from folks who wanted to see what was under the hood and who want to build the engine themselves,” Mong said.

And, as application scenarios grow, the incentive to purchase a Helium Hotspot grows as well.

Electroneum: A Digital Ecosystem for the Unbanked