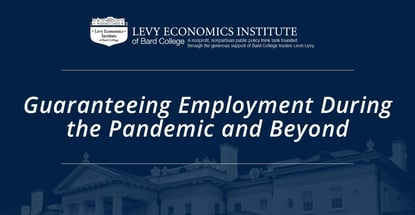 In a Nutshell: While the COVID-19 pandemic has thrown jobs and the economy into turmoil, Bard College Levy Economics Institute Professor Pavlina R. Tcherneva argues that unemployment is an avoidable problem. Her recent policy note, “Guaranteeing Employment During the Pandemic and Beyond,” explains the failings of current policies and offers a way forward to stem the tide of mass unemployment. Tcherneva also published a book, “The Case for a Job Guarantee,” that looks at the issue in a broader sense, including how a job guarantee policy could be implemented in the U.S. and how it fits in with the Green New Deal.

The COVID-19 pandemic has blindsided businesses, consumers, and the government and has exposed flaws in multiple areas of the nation’s infrastructure. The virus has wrought havoc on jobs and the economy in the U.S.

And with COVID case numbers still surging, unemployment rising, and evictions looming, things don’t appear to be getting better any time soon.

But it doesn’t have to be like this, according to a recent policy note published by the Levy Economics Institute of Bard College.

“Guaranteeing Employment During the Pandemic and Beyond,” by Bard College Associate Professor of Economics Pavlina R. Tcherneva, illuminates the flaws in the handling of the pandemic when it comes to jobs. It also proposes solutions to stem the unemployment tide and set Americans up for success in the future.

Tcherneva’s work on macroeconomic issues and her research on the field of fiscal policy addresses the effects of alternative stabilization programs, including the American Recovery and Reinvestment Act (ARRA) and the Federal Reserve’s policy responses during the Great Recession.

She has also collaborated with policymakers from the U.S. and abroad on designing and evaluating job-creation programs.

“Everything about the coronavirus response in the United States today suggests one thing tomorrow: guaranteed and prolonged mass unemployment, the kind that most of us have never witnessed,” according to Tcherneva’s policy note.

The federal government passed the CARES Act in the early weeks of the pandemic to help protect the economy and wages. But the job protections offered in the act were extremely weak, according to Tcherneva. The report predicted that when the act expires, many of the layoffs that did not take place over the past few months will take place when the economy reopens.

Pavlina R. Tcherneva is an Associate Professor of Economics at Bard College.

“Whatever cash assistance we provide to families to keep them afloat now, millions of them will be scrambling for the pitifully scarce jobs of the postpandemic world,” according to the report. “And we know what many of those jobs will be: poorly paid, with no benefits or basic employment protections, much like the ones ‘essential’ workers currently have.”

While lending and cash assistance may help families pay bills in the short term, they ultimately aren’t job creation policies.

“If some people are actually earning more money because of the extra $600, imagine what they were making in their jobs,” Tcherneva said. “What that tells us is that our economy just doesn’t generate well-paying jobs for a lot of people a lot, right?”

It’s not only unemployment that’s the problem, she said — a lot of people’s wages are also being slashed.

“And we have data showing that nearly half of workers are already making under $15 an hour,” Tcherneva said.

All of this adds up to a bleak outlook for the future of employment in the U.S. unless something changes.

“The avalanche of job losses today and mass unemployment tomorrow are of our own making, created by our seeming inability to conceive of policies that protect and create jobs on demand,” according to the report.

While the COVID-19 pandemic has resulted in high unemployment, a job guarantee policy could prevent further damage.

“There is another option: instead of capitulating to a world of guaranteed unemployment, we can demand policies that guarantee employment,” according to the report.

Tcherneva said this can be done through a job guarantee program.

“It’s essentially a replacement for unemployment as an inflation anchor,” she said. “Instead of keeping people in unemployment, it actually keeps people in basic employment. And the program kind of acts as a buffer to economic growth.”

This could be accomplished in a number of ways, according to the report. The U.S. could follow in the footsteps of certain European countries where the government promises to pay the wages of workers whose jobs are threatened by the pandemic.

“Another method would be for the government to provide direct grants to firms, as several members of Congress have recently proposed, that would cover the wages of all workers earning up to a certain amount, or of furloughed and laid-off workers only, with additional subsidies for operating costs,” according to the report.

Some may argue that funding such programs would be impossible, but the report states that the $2.2 trillion authorized in the CARES Act was enough to pay every wage in the U.S. economy for three months.

“If any of the above methods were attempted (and the government paid a proportion of all wages), the budget could have protected jobs through the end of the year and possibly longer,” according to the report.

Tcherneva’s policy note is informed by a distinguished career studying issues related to unemployment and ways for nations to address it.

While the recent policy note deals with the very specific case of the COVID-19 pandemic, Tcherneva covers unemployment in a much broader sense in her new book, “The Case for a Job Guarantee.”

“The Case for a Job Guarantee,” by Pavlina R. Tcherneva was released in July 2020.

“The book has a bigger, bird’s-eye view goal of explaining that, basically, unemployment is not unavoidable. We have all become accustomed to this idea,” Tcherneva said. “And to document the benefits of putting in place the job guarantee as an alternative to current fiscal policies.”

She explained that the book covers not only empirical data and the implementation of a job guarantee, but it also dives into how a job guarantee fits into bigger conversations like the Green New Deal and transitioning from a fossil fuel to a green economy.

“My focus is really on shaking the paradigm that unemployment is unavoidable and maybe even necessary for price stability,” Tcherneva said.

“This compact primer is the ultimate guide to the benefits of one of the most transformative public policies being discussed today,” according to the book description. “It is essential reading for all citizens and activists who are passionate about social justice and building a fairer economy.”

The book, which was released in July 2020, maintains a five-star rating on Amazon and has received high praise from academics and activists alike.

“More than any other piece of public policy, the Job Guarantee can help us build a more equitable economy and just society,” writes Ady Barkan, activist, organizer, and author of “Eyes to the Wind.” “Pavlina Tcherneva has written the perfect primer for anyone interested in understanding why and how the Job Guarantee can do so much good.”