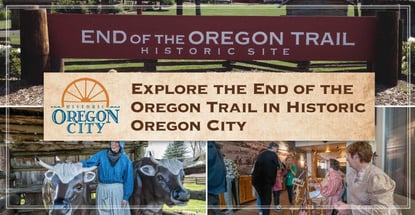 In a Nutshell: As credit card enthusiasts, we love being able to cash in travel rewards to save money on unique and interesting getaways. At the End of the Oregon Trail in Historic Oregon City, travelers can get a taste of pioneer life at what was once a gateway to the Pacific Northwest in the mid-19th century. The End of the Oregon Trail features an Interpretive Center where visitors can peruse exhibits or get involved in interactive, educational activities. The organization also hosts guided Overland Tours for those who want to get outdoors and experience parts of the trail for themselves. The End of the Oregon Trail is also situated near other notable attractions, including Willamette Falls, Mt. Hood, and the city of Portland.

Here at CardRates, we love saving money and getting the most out of our credit cards. Oftentimes, that means racking up rewards and cashing them in to save big bucks on airline tickets, hotels, and other travel expenses.

So, when we come across interesting vacation spots that catch our eye, we like to share them with our readers who are also looking to cash in some rewards — and the latest destination is the End of the Oregon Trail in Historic Oregon City.

Today’s readers may associate the Oregon Trail with the early computer game of the same name where many players met their fate by being informed that they had “died of dysentery.” In reality, mid-19th century traveling along the trail for a life out West were met with many difficult challenges, not just dysentery.

And Oregon City was the last stop on the 2,000-plus mile trail.

“Oregon City is considered the end of the Oregon Trail because the land claim office was in town here,” said Bethany Nemec, Development Coordinator at The End of the Oregon Trail in Historic Oregon City. “Pioneers were coming out West to get free land — the government promised 640 acres for any married couple just for showing up.”

Nemec explained that the pioneers had to fill out paperwork at the land claim office before claiming their property, which could actually be anywhere in the Pacific Northwest. So a large portion of travelers destined for the Pacific Northwest was filtered through Oregon City.

So, why Oregon City? Because in 1844, it became the first American city west of the Rocky Mountains to be incorporated. The city was one of the only locations in the region that had an existing infrastructure to establish the land claim office, Nemec said.

The centerpiece of the End of the Oregon Trail is the organization’s Interpretive Center, which Nemec said is located on a piece of land that belonged to George Abernathy in the mid-1800s.

Abernathy ran a store and provided space for weary travelers to rest.

“When you rolled in from the Oregon Trail, you’ve been hiking 2,000 miles all summer and didn’t quite feel like building a house yet,” Nemec said. “So, he would allow people to camp out on this property that we’re on right now. A lot of people literally spent their first winter right here, camping out and waiting for good enough weather to go out and build their house.” 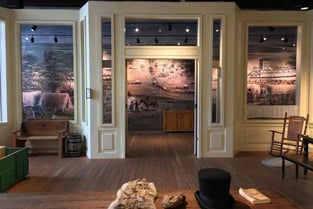 Inside the End of the Oregon Trail Interpretive Center, visitors can experience self-guided interactive exhibits and pioneer crafts that offer insight into pioneer life, such as candle dipping and making rag dolls. A typical visit to the Interpretive Center lasts about one-and-a-half hours, according to the organization, but visitors are welcome to stay longer.

“Special history talks are offered twice daily to take you beyond the exhibit and gain special insight into a variety of rotating topics,” according to the End of the Oregon Trail website. “Presentations occur at 10:30 and 1:30. Two different topics will be presented each day.”

The center also shows screenings of the “Bound for Oregon” feature film and features popular games from the time period.

Other activities show visitors how to pack a wagon, dress like a pioneer, make butter, and fill out a land claim, according to the website.

The Interpretive Center also pays homage to Native Americans — an important part of the history of the West — through exhibits in partnership with the Confederated Tribes of the Grand Ronde.

Visitors to the End of the Oregon Trail can make their experience as interactive as they would like. In addition to plenty of interactive activities in the Interpretive Center, the building also houses more traditional museum-like exhibits that provide valuable insights into what everyday life was like for pioneers and Native Americans.

For the more adventurous, the End of the Oregon Trail offers guided Overland Tours.

“The Overland Tour helps visitors walk in the footsteps of pioneers along the Oregon Trail Experience Interpretive Trail, which features replica animals and landmarks, such as Independence Rock and Laurel Hill,” according to the organization.

Bethany Nemec is the Development Coordinator for the End of the Oregon Trail.

“During the one-and-a-half-hour tour, the tour guide will share fun facts about the dangers, tasks, and decisions pioneers experienced at jumping off towns, the Great Plains, forts, campsites, forks in the road, and their final destination in Oregon,” according to the website.

She said the center sees a lot of school groups visiting during the spring, but summer is the busiest season and also offers visitors a wider variety of special programming.

Adult admission is $13 to the Interpretive Center or the Overland Tour, or $19.50 for both, and discounts are offered for children and seniors.

Visit Other Local Attractions Including Mt. Hood, Portland, and More

While the End of the Oregon Trail makes for a unique and educational destination, plenty of other attractions are just a short drive away for those visitors spending more than a day or two in the area

First, Oregon City has plenty to offer on its own.

Oregon City is home to Willamette Falls, the second-largest waterfall by volume in the Northwest. The falls are 1,500 feet wide and 40 feet high. The falls are open for public viewing and visitors can also stop in at a museum documenting the history of the falls. 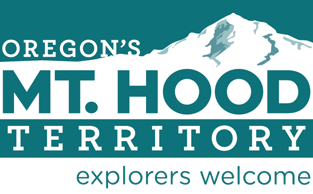 Attractions near the End of the Oregon Trail include Willamette Falls, the city of Portland, and Mt. Hood.

Another unique attraction in Oregon City is the Oregon City Municipal Elevator. Partially because of Willamette Falls, Oregon City has drastic changes in elevation that once had to be navigated by walking along cliffs. In the early 1900s, a hydraulic elevator was built to bridge the 130-foot elevation change. The current elevator — one of only four in the world — was built in the 1950s and is the only such elevator in the U.S.

And just 20 miles north of Oregon City is Portland, the largest and most populous city in the state. Portland is known for its vibrant independent culture, including a robust food scene, thriving music scene, and plenty of nightlife. It’s also home to numerous museums, many of which are focused on science and wildlife.

For visitors who are willing to drive a little farther, Mt. Hood is about two-and-a-half hours east of Oregon City.

Mt. Hood’s peak reaches more than 11,000 feet above sea level and with its perpetually snow-capped upper reaches, the region offers a wealth of outdoor activities.

“Find year-round skiing and Olympic-class snowboarding in Oregon’s Mt. Hood Territory,” according to the Mt. Hood website. “Pitch your tent in one of many campgrounds and cast your fishing line in a nearby lake or river. Whitewater raft, kayak, skydive, bird watch, horseback ride, hike, and get on your bike for wicked off-road trails.”

The next time you’re itching to cash in some travel rewards and want to experience a piece of American history a little off the (modern) beaten path, consider the End of the Oregon Trail and Historic Oregon City.