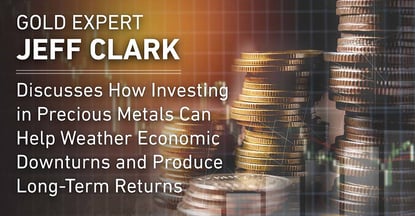 In a Nutshell: Every good investor knows that diversity is key to a successful portfolio. That’s why precious metals expert Jeff Clark recommends investing in commodities like gold and silver as a solid hedge. The Senior Precious Metals Analyst for online dealer GoldSilver.com explained how the historical cycle that returns to precious metals as a basis for currency proves the value of holding gold and silver as an asset. Clark also explained the importance of keeping gold and silver in an allocated storage facility for maximum security and quick liquidity.

In today’s digitally connected world of online brokers, real-time exchanges, and financial apps, it is easier than ever to buy, sell, and trade stocks, bonds, and commodities. Investors can even purchase cryptocurrencies with the click of a button.

Many people work hard to maintain a mix of low, moderate, and high-risk investments to they grow their wealth with a diversified portfolio, as well they should. But precious metals expert Jeff Clark said that, in all their investing fervor, folks can easily overlook one of the most stable (and oldest) investments of all — commodities such as gold and silver.

Clark is the Senior Precious Metals Analyst for GoldSilver.com, an online precious metals dealer that facilitates gold and silver bullion purchases and storage for investors.

“The most important thing to understand about gold is that it’s a great hedge,” Clark said. “And studies show that portfolios with gold in them perform better over the long run than portfolios consisting of only stocks and bonds.”

Clark explained that gold is often inversely correlated to many other investments. When stocks go up, gold tends to remain flat. But when stocks go down, whether because of a bear market or even a crash, gold prices tend to increase.

We recently sat down with Clark to further discuss the world of precious metals investing and some key points investors should consider when purchasing gold or silver.

Historical Cycles Demonstrate the Value of Investing in Gold and Silver

Clark said it is important for skeptics to understand that throughout the history of civilization monetary systems have gone through cycles of ups and downs and have always returned to gold and silver.

He shared an interesting story with us about how his colleague and Founder of GoldSilver.com Mike Maloney came to this realization.

In the early 2000s, a financial planner employed by Maloney’s mother, Mae Maloney, lost at least half of her net worth over the course of two years, Clark said. Maloney was saddened and angry to see his mother have to deal with such a loss because of the carelessness of her financial custodian.

Gold has been used as a store of value for millenia.

Maloney decided that he was going to become his mother’s financial planner to help protect her savings from being further depleted. Maloney had always been an entrepreneurial type and was a successful designer and manufacturer of high-end stereo equipment.

When Maloney became his mother’s financial planner, he began studying economics more closely and had somewhat of an epiphany.

“Mike spent countless hours studying this stuff and what he learned from history is that certain patterns repeated over and over again,” Clark said. “Eventually, every monetary system he studied would return to gold and silver as a store of value.”

Clark said that Maloney decided then to invest the bulk of his family’s wealth in gold and silver because he believes that — as history has shown — gold and silver will once again account for all the excess currency that’s been created.

In his book, “Guide to Investing in Gold & Silver,” Maloney discusses this pattern in further detail. He writes that, for the past 2,400 years a pattern can be observed in which governments debase and dilute their money supply. Over time, the population begins to feel the loss of their purchasing power.

“Then something miraculous happens,” Maloney writes. “Through the free market system, the will of the public causes gold and silver to automatically revalue. In doing so, it accounts for all the currency that was created since the last revaluation.”

Clark said this scenario played out in ancient Rome. Leaders devalued the currency to fund wars, and the money was eventually debased so much that the once mighty civilization couldn’t recover.

Clark said once a consumer decides to begin investing in gold and silver, it is important to consider how he or she will store the assets.

“Most people will stick their gold or silver in a safe in their home or maybe a safe deposit box at the bank,” Clark said. “We generally advise against those methods for storing precious metals.”

That wasn’t always the case for Clark. He said years ago, he stored most of his gold in a safe, hidden away in a closet, with the key hidden in a separate room. Still, an intruder broke in and found the key and the safe and, just like that, most of his gold bullion was gone.

Clark said these days, he never stores any gold or silver at all in his home.

Clark said allocated storage is the safest way to store and access gold and silver.

“If you put your precious metals in a safe deposit box at the bank, those are not insured,” he said. If anything happens to the contents of your box, you’re out of luck. Once it’s gone, it’s gone for good, so how you store gold and silver is critical.”

And liquidity is another factor to note, Clark said, since an investment is essentially worthless if it can never be accessed for its cash value or traded in the real world.

Cashing in gold or silver that is stored at home or in a safe deposit box is not always a simple, straightforward process. The precious metals owner must find a reputable gold and silver dealer, preferably nearby since shipping the heavy metals can be costly, and take the assets to them to trade in for cash. And you’ve got to watch your surroundings so that you don’t put yourself at risk.

Clark said allocated storage is the safest and most convenient way to store gold and silver. Allocated storage services, like the storage service offered at GoldSilver.com, keep an investor’s bullion in a fully insured, highly secured storage facility in an account in his or her name. With purchases made through GoldSilver.com, investors can have their bullion shipped directly to the storage facility for maximum security.

Additionally, Clark said, this method is the best for liquidity since customers can sell at any time, without ever even having to handle the gold or silver. They can also have their bullion shipped to them whenever they want in the event they need the physical metal on hand.

To store bullion using GoldSilver.com’s service, investors pay .06% of their asset volume per month or $6 for every $10,000 stored. Clark said he spends more than that at Starbucks every month.

Historically, professional traders in the pits have traded large quantities of gold or silver on paper, as they would other stocks, but it was never an option for the average investor. Over the past decade or so, Clark said that paper gold — in the form of an exchange-traded fund (ETF) — has become available for the retail investor.

“Now you can purchase an ETF, the largest of which is called GLD,” Clark said. “The catch is that the only thing you get is exposure to the gold price. With just a couple of exceptions, you generally can’t take delivery of a physical product, and when you can it’s expensive.”

Clark referred to GLD ETFs as fractional paper products and said they carry their own expenses, both transaction fees to buy and sell, and management fees that are used to pay for storage of the gold they hold.

“So, instead of owning a fractional paper product, we recommend holding the actual physical product,” he said. “And the reason for that is we think the types of crisis we’re going to see ahead of us could require you to have physical metal in your hand. The worse the crisis, the more likely you need actual physical metal.”

Clark said that at GoldSilver.com, they only deal in whole products, unlike paper trading and some other precious metal dealers that sell fractional gold or silver amounts.

“If you want to buy gold from us, it’s going to be a whole product — a full one-ounce Gold Eagle or a whole silver Maple Leaf, for example,” he said. “You own it, and it’s in your name and title. We believe holding the physical product is what’s best at this particular point in history.”

Maloney’s first book, 2008’s “Guide to Investing in Gold and Silver,” became the best-selling precious metals investment book of all time. Clark said the book is now available as a free download on the GoldSilver.com website.

Clark has partnered with Maloney on a forthcoming book called “The Great Gold and Silver Rush of the 21st Century,” which Clark said should make for a fun, entertaining, and compelling read. He said the book explores the differences between the upcoming boom in gold and silver with the one that occurred during the 1970s, and why this next boom will be even bigger.

For investors looking to further diversify their portfolios, Clark said they can’t go wrong with gold or silver as a great hedge.