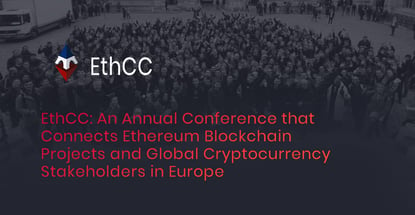 In a Nutshell: Soon after Ethereum’s launch in 2015, a group of enthusiasts in Paris organized Ethereum France as a forum for Europeans to engage with the technology. What started as a modest meetup organized by the association in 2016 has grown to become the Ethereum Community Conference (EthCC), the largest annual European Ethereum networking event. Today, the Ethereum blockchain has emerged as the technical backbone of decentralized finance, and EthCC brings together stakeholders from around the world to talk about its future. Although COVID-19 transformed the 2020 EthCC 3 event into a hybrid virtual affair, plans are underway to return for a full conference in Paris in 2021.

The Ethereum blockchain was about a year old when Paris-based Ethereum France — known initially as Asseth — was founded in 2016 to provide a forum for enthusiasts to talk about the technology in Europe. Soon after, Ethereum started to gain traction among those searching for a Bitcoin alternative with a more open economic model.

Bitcoin, the world’s leading crypto, employs a proof-of-work (PoW) mechanism that benefits users who validate transactions and mine coins using powerful computers. But that puts miners using off-the-shelf hardware at a severe disadvantage.

In 2015, Ethereum started attracting users because it designed a processor-agnostic PoW, which was fairer to miners using general-purpose computers.

That’s why Jérôme de Tychey, a French-educated economist, got started with Ethereum and found himself part of a growing blockchain community in Paris. And that community began organizing and connecting with similar groups in other parts of the world through an event that would become the Ethereum Community Conference — EthCC.

“We started as a meetup of interested people to learn about Ethereum itself,” de Tychey told us. “It grew rapidly with a community that was burgeoning and very enthusiastic in France.”

He participated in the creation of Ethereum France and now serves as its President. And EthCC has grown into the group’s flagship event and the largest blockchain conference based in Europe.

The first EthCC in 2018 had 200 presenters, while the 2020 version of the event had 300 presenters — even though the COVID-19 pandemic altered its plans. And the event has been so successful that de Tychey is considering adding days so even more enthusiasts can share their passion for blockchain technology.

“Maybe next year we’ll extend it to a full week,” de Tychey said.

From Meetup to Industry-Leading Conference

In 2016, Ethereum France connected with software and development consulting companies interested in tapping into the group’s potential. Members also became contributors to a research repository.

Then the Ethereum Foundation itself reached out to the group with interest in organizing an event in Europe. In conjunction with a Chinese partner, Ethereum France presented Edcon Paris in early 2017.

“That was technically the first edition of us organizing a conference,” de Tychey said. “We learned that it was possible to assemble the top minds in the ecosystem just by reaching out to them and asking.”

In 2016, Ethereum platform had undergone a security crisis when the popular DAO smart contract was hacked, and more than $50 million in crypto was stolen.

Ethereum France President Jerome de Tychey spoke with us about the growth of EthCC.

“So in 2017, speakers were focused on adding more security and pitching a sort of multichain narrative with lots of different protocols talking to each other and preempting the future scaling problem we were going to face,” de Tychey said.

The Ethereum Foundation then decided to turn Edcon into a global event. Ethereum France was ready to step in to serve the European audience.

“We felt that if we wanted to have a developer conference in Europe, we had to organize it,” de Tychey said.

The result was EthCC 1, held in March 2018. More than 1,200 attendees gathered for talks on Ethereum’s progress and security, data, compliance, and other topics.

“We were lucky because 2018 was the height of the ecosystem. Money was flowing into different projects, and people were bullish about Ethereum, and everybody wanted something to happen,” de Tychey said.

EthCC 3: A Hybrid Physical-Virtual Event with an International Focus

The second EthCC continued the event’s upward trend, with 1,600 attendees and 250 speakers assembling in Paris for another round of sessions. That event focused on entrepreneurship and blockchain’s enterprise implications.

Ethereum France decided to expand the event’s scope by reaching out to community members in Asian countries for EthCC 3, which took place in March 2020.

“Even though the blockchain community is open source, it is still tough to follow everything that’s happening in Asia from Europe,” de Tychey said. “But they represent a significant part of our ecosystem, so it was important for us to establish those links.”

The event managed to reach a significant number of Chinese, Japanese, and other Asian community members and added speakers from the region, de Tychey said. And while COVID-19 put a damper on EthCC 3, it was still a rousing success.

“When the COVID-19 situation appeared, we had many speaker cancellations, and many people didn’t end up traveling,” de Tychey said. “So we switched to doing remote talks as much as we could. And almost 1,000 attendees still made the trip, and we had many more sponsors than we expected.”

Among those were significant players in cloud computing and enterprise consulting.

“With Azure and AWS, we now have an enterprise-grade infrastructure for whatever you want to build on blockchain,” de Tychey said. “We were very proud to have AWS sponsoring us this year. Having these players chiming in helps us to legitimize the conference and show that Ethereum in an enterprise context looks like.”

In the wake of the crypto bear market arriving in 2018, preparation for EthCC 2 in 2019 focused on bringing in the enterprises.

“Lots of talks were around security tokens and the approach of taking existing assets, including stocks and bonds, and giving them a copy or digital twin on the blockchain,” de Tychey said. “And there were discussions about how regulators were going to react to that — would they be permissive or restrictive?”

The 15-track EthCC 3 agenda continued that trend. “It was definitely the year of decentralized finance and the enterprise, with protocols and ideas on how we should use the tokens living on the blockchain to build financial products and applications. That includes collateralized debt positions for security tokens and access to derivatives or other assets to consumers through the blockchain,” de Tychey said.

EthCC 3 welcomed a variety of engaging speakers from the world of blockchain.

Meanwhile, alongside those developments, preparations continue within Ethereum to migrate the platform to a less-energy-intensive proof-of-stake (PoS) transaction validation protocol, setting up the network to accommodate additional scalability, throughput, and security.

These new chains, collectively known as Ethereum 2.0, were initially slated to be teased at EthCC 3 before scheduling for that rollout had to be revised. Now, they will undoubtedly make for prime discussion at EthCC 4 in 2021.

“I feel fortunate to have been able to organize this conference year after year,” de Tychey said. “And we’re following this progress very closely.”