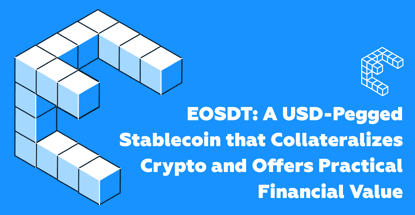 In a Nutshell: Many cryptocurrencies experience price volatility on the open market, but that isn’t true for all blockchain-based assets. Equilibrium’s EOSDT is a stablecoin that is tied to the value of the U.S. dollar, making it a more reliable digital currency. Users generate EOSDT coins through the collateralization of other crypto assets, making it a valuable tool for leveraging — or hedging — investments. And Equilibrium is working to enable the collateralization of a wider variety of cryptocurrencies and enhancing its own dynamic network.

In December 2017, Bitcoin — the world’s premier cryptocurrency — was valued at nearly $20,000 per coin. But one month later, its value plummeted by 26%. And after another succession of price drops in early 2018, it fell to about $9,000 per coin. That meant it had lost more than half of its value in just three months.

Facebook’s decision to ban crypto advertisements as well as new regulations in major markets contributed to that decline. Those factors also caused skittish investors to sell off holdings, leading to a drastic price drop. As of February 2020, after another slump and a gradual gain, Bitcoin was valued at just shy of $9,500.

That fluctuation in value illustrates the potential volatility of the crypto market and explains the reluctance of investors to get involved with digital assets. It’s also a signal that cryptocurrencies may not be suited to everyday exchanges and transactions.

“The EOS blockchain is quite fast with huge network capacity and excellent potential for development,” said Alex Melikhov, CEO of Equilibrium. “Equilibrium is the framework, the technology basis, for building decentralized stablecoins. The first proof of concept was the EODST stablecoin that we launched in April 2019. And we think it has succeeded in terms of its traction so far.”

That’s because EOSDT pegs to the U.S. dollar, which is among the strongest currencies in the world. That stability helps to minimize volatility, making it a less risky investment that is better suited to standard transactions — as well as to many other financial use cases.

Stability Encourages Adoption and Boosts Value as a Financial Tool

Stablecoins are pegged to real-world currency, but other cryptocurrencies are valued purely on supply and demand. The resulting price fluctuations can make them a poor fit for everyday transactions. Stablecoins bridge the gap between the stability of fiat assets and the benefits — speed, security, transparency — of the blockchain.

Users generate EOSDT coins when they lock their crypto assets in smart contracts that are based on the EOS blockchain. These contracts are indelibly recorded and distributed within the network, making them extremely difficult to tamper with or falsify. That helps protect the value of EOSDT while ensuring the security of user crypto, as does its stability fund, which has more than $17.5 million in insurance that pays out automatically in the event of a crash.

Equilibrium CEO Alex Melikhov spoke with us about how the EOSDT stablecoin will help cryptocurrency investors.

In return, the user gets a quantity of EOSDT, which can serve multiple purposes. In some cases, users want to leverage the high value of their crypto without liquidating the assets. In times when the crypto is bearish, holders can protect their investment by taking refuge in a stable currency that lets them get their assets back when the value rises again. In the meantime, users can also leverage EOSDT as a reliable transaction medium.

“From that perspective, you actually can consider stablecoins as dollar liquidity with very low APR because you’re generating stablecoins,” Melikhov said. “And you can get back your collateral — the volatile cryptocurrency you deposit in our smart contracts — when you pay back this amount of stablecoins you generated plus a small 1% fee that has been accrued by the system for the period you used the stablecoins.”

Melikhov and his colleagues focus not only on their own blockchain but also on many others, as Equilibrium is pursuing ways to bridge EOS with other existing networks. As of February 2020, the team is working on integrating Telegram Open Network with EOS so users can collateralize Gram tokens. And that is just the beginning.

“Our goal is to work with the broader crypto community,” Melikhov said.

In contrast, some other blockchains may deploy and collateralize real-world assets, rather than virtual ones, in exchange for stablecoins. But Melikhov has no plans for EOSDT to move in that direction.

“We see some risks there, specifically concerning regulation,” Melikhov said. “Our focus, currently, on the development side is to obtain as many collateral types from different blockchains as we can.”

Building a multichain framework — that isn’t EOS-focused — will enable greater flow and collateralization of diverse cryptocurrencies. Those opportunities will, in turn, serve to expand EOSDT’s user base and increase interaction with a wide range of crypto holders.

“We are expecting to engage with a broader crypto community that is holding other assets that will be available for collateralization on our smart contracts at some point,” Melikhov said.

Equilibrium actively engages with its community members through Twitter and — unsurprisingly, given its current focus — Telegram.

“We have an active Telegram community,” Melikhov said. “There are a lot of thoughtful people who are asking very bright questions about products. And we’re supporting our users through Telegram, so whatever they ask on the group, we immediately answer.”

Equilibrium also developed a way to stake EOS collateral for Block Producers in a riskless way, and encourage active member participation. Not only did community involvement lead to the development of the Block Producer system, but ongoing engagement is at its foundation.

Block producers are decentralized, independent entities that operate and govern the EOS ecosystem. The community votes on block producers with its native utility token (NUT). Block producers distribute rewards to initial EOS collateral holders and those who voted with NUT. Thus collateral holders earn approximately 2% on EOS they put into the system and NUT holders can currently earn around 5% on staked NUT. And those numbers are subject to change depending on amount of tokens staked.

Equilibrium democratizes its blockchain by allowing token holders to vote on block producers.

However, not all of them produce blocks. Those ranked in the top 21 engage in block production. The rest are designated standby producers, who are incentivized to wait in the wings in case they need to step in.

Both active and standby block producers can earn rewards for their service. A portion of those tokens are typically reinvested to maintain and develop the ecosystem.

“We developed that system in several stages, and at each stage, we require some feedback from the community. And we pay a lot of attention to that kind of feedback,” Melikhov said. “Eventually, we have built this system that meets the expectations of the community.”

Equilibrium started developing decentralized apps (DApps) in 2017 around the height of the crypto boom and the subsequent crash. However, the volatility of the crypto market and the reputation of those assets weren’t the only challenges Melikhov and his team faced when it began developing EOSDT ain 2018.

“We had some quite painful experiences with Ethereum,” Melikhov said. “If you are building things on Ethereum, you are hitting a lot of constraints, which come from the architecture itself. For now, we strive to connect more scalable blockchains with more network capacity and more mindful architecture.”

Equilibrium’s current EOSDT-related focus is bridging EOS with other blockchains, enabling the collateralization of additional types of crypto assets. The first on the list is Telegram, allowing the users to collateralize their Gram tokens. Next, Melikhov and his development team will work to incorporate more collateral types into the system.

“Bitcoin is a very high priority for us,” Melikhov said. “The next would be Ethereum. And then we’re looking at other blockchains.”

EOSDT is currently listed on multiple different crypto exchanges and is supported by a variety of wallets. Consumers can purchase it or generate coins through EOS-based smart contracts. And investors can benefit from EOSDT’s fixed value offers and its potential for hedging and leveraging more volatile crypto investments.