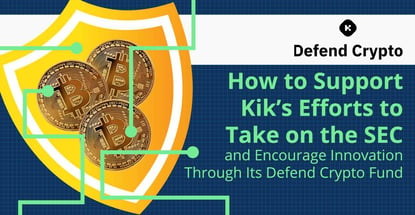 In a Nutshell: When Kik Interactive launched a token distribution event (TDE) in 2017, the U.S. Securities and Exchange Commission turned its attention to the Canada-based messaging app company. The SEC is bringing a lawsuit against Kik stating that the company sold unregulated securities via its token sale. Kik established the Defend Crypto fund to support itself and other crypto companies against the SEC. The Blockchain Association now oversees the fund to ensure resources are used fairly for the benefit of the industry. Supporters can visit the Defend Crypto fund to make their own contribution to the cause.

Kik was born in 2010 as a mobile messaging app, and today it’s aiming to send one of its biggest messages ever — to the Securities and Exchange Commission — with supporters that include the Blockchain Association and the Defend Crypto fund.

In 2010, Kik Interactive launched its smartphone app that preserves users anonymity and it quickly grew in popularity. By 2016, the app had 300 million registered users, including 40% of U.S. teenagers.

In 2017, the Canadian company entered new territory by diving into the world of cryptocurrency and launched a token distribution event (TDE) for its own digital currency, Kin.

“Kin will be used as the currency on the Kik social network for things like emojis, stickers, hosting and participating in group chats, building apps like bots, etc.,” according to a 2017 CNBC article. “However, the stated goal is for Kin to also be used as currency outside of the Kik app.”

A company launching a token sale in 2017 was certainly not unusual. The nascent fundraising method quickly gained momentum as companies learned more about blockchain technology and cryptocurrency. Eventually, token sales by startups all over the world were seemingly popping up left and right.

In fact, startups raised a total of $5.6 billion in 2017 through such methods.

But just three days after Kik’s TDE, the Securities and Exchange Commission contacted the company to let it know the SEC considered the Kin token sale to be an issuance of an unregistered security. And in June, the SEC sued Kik.

Kik has attempted to comply with the SEC while maintaining Kin should not be classified as a security.

Kik also launched the Defend Crypto fund to help raise money to defend Kik and other blockchain projects that may face similar challenges.

To maintain transparency and fair stewardship of the money, Kik turned over the Defend Crypto fund to the Blockchain Association, “an association of industry leaders advocating for the innovation and collaboration that will unlock the tremendous potential in our community.”

We recently spoke with Kristin Smith, Director of External Affairs at the Blockchain Association, to learn more about the SEC’s lawsuit, its implications for the future of cryptocurrencies, and how Defend Crypto is helping Kik stand its ground against the SEC.

The proliferation of cryptocurrencies and token sales have uncovered a legal grey area, and while the SEC has stated it believes most of these sales should be classified as securities sales, it has let many startups conduct TDEs without intervention.

But Kik was not able to avoid the agency’s scrutiny.

Kristin Smith is the Director of External Affairs at the Blockchain Association, which advocates for innovation in the industry.

“By selling $100 million in securities without registering the offers or sales, we allege that Kik deprived investors of information to which they were legally entitled, and prevented investors from making informed investment decisions,” said Steven Peikin, Co-Director of the SEC’s Division of Enforcement in an announcement.

And Chief of the Enforcement Division’s Cyber Unit Robert A. Cohen added, “Kik told investors they could expect profits from its effort to create a digital ecosystem. Future profits based on the efforts of others is a hallmark of a securities offering that must comply with the federal securities laws.”

But, the Blockchain Association and Kik disagree. Smith said the SEC’s standards for what qualifies as a security is outdated.

“I think the biggest problem is that any time you have a new technology, there are often regulatory frameworks that are in place that have been around for a while and need to be updated,” she said.

Blockchain technology and cryptocurrencies aren’t like anything that’s been seen before, especially as it relates to securities laws, Smith said. This makes for a challenging scenario for agencies when it comes to classification.

The SEC’s definition of security revolves around stocks and bonds, and dates back to a Supreme Court ruling from 1946, she said.

“Fast forward 70-plus years, and we’re still trying to use this 1946 definition to figure out when different tokens are qualified securities,” she said. “It’s a situation where the policy needs to be updated to get the same protections consumers want but also the certainty that the innovators need to move forward with their projects.”

Kik recently issued a paragraph-by-paragraph refutation of the SEC’s 130-page complaint against the company, and Kik plans to continue its battle.

“So Kik is going to take on the SEC in court to make sure there is a foundation for innovation going forward,” according to the Defend Crypto website. “Many others are on the path to do the same, and will need our support.”

The Defend Crypto fund was launched by Kik with an initial contribution of $5 million from the company.

“The SEC has been shaping the future of crypto behind the scenes with settlements that set a dangerous precedent and stifle innovation,” according to the Defend Crypto fund. “Kik is unwilling to let that happen and has created DefendCrypto, a fund dedicated to supporting legal initiatives that impact the crypto industry.”

The Defend Crypto fund was launched by Kik to support its fight against the SEC but has expanded for the benefit of others in the blockchain industry.

Many other projects are facing regulatory uncertainty and pressure behind the scenes, according to Kik, and a lot of them do not have the resources to fight. Those companies are left with no choice but to close up shop.

“That is why Kik, along with other contributors, have already donated $2MM to assisting other projects that are dealing with fights of their own and is calling on others to do the same,” according to the Defend Crypto website.

The $2 million balance is the remainder from the initial fund established by Kik. Smith said now that the funds are split, the Blockchain Association is working to grow the funds and will also decide when and where to use the funds.

The Blockchain Association is putting a process in place to ensure the funds will be used in a way that’s constructive, she said.

“Also, I think just the idea of having the fund out there shows that the blockchain industry is passionate and committed to working through these regulatory issues,” Smith said. “And we’re ready to engage with regulators and with the courts in a constructive manner in order to get the type of certainty that we think will be most helpful for the industry.”

How You Can Contribute to Defend Crypto

For those who want to contribute to the Defend Crypto fund, simply visit the website and select the cryptocurrency with which you would like to contribute. Then, copy the Coinbase address generated on the screen, and send your cryptocurrency to that address.

The Blockchain Association is managing Defend Crypto, in the interest of transparency and fair stewardship of funds.

Although the Defend Crypto fund is held in a Coinbase account, contributors can send their donations from any wallet or exchange. All donations are anonymous and are not publicly disclosed.

As of this writing, about $1.65 million has been contributed to the Defend Crypto fund.

“For the future of crypto, we all need Kik to win. This case will set a precedent and could serve as the new Howey Test for how cryptocurrencies are regulated in the United States,” according to the website. The Howey Test is the methodology established by the U.S. Supreme Court in 1946 to determine whether something is a security.

Kik may be the first case, but it won’t be the last case, according to Kik. With Defend Crypto, the industry will have a source of funds to draw from in the advancement of its common goals.

“If you too are fed up with this innovation tax, we encourage you to contribute also as we take on the SEC on behalf of the future of crypto in the U.S.,” according to Defend Crypto. “Any contributions will be allocated to initiatives that promote regulatory clarity and allow for responsible innovation.”

Just as traffic laws pertaining to horses and buggies wouldn’t make sense for today’s automobile-packed streets and highways, Kik and the Blockchain Association maintain that the SEC’s security standards aren’t appropriate for the new world of blockchain technology and cryptocurrencies.

And with the Defend Crypto fund, they are calling for others who feel the same to make a contribution to support the future of innovation.

ARK Allows Anyone to Utilize Blockchain Technology with Ease