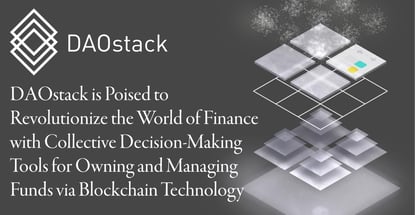 In a Nutshell: Most organizations adhere to the traditional top-down decision-making model — sometimes to the detriment of the best interests of the group. DAOstack is revolutionizing the way collective decisions are made in the finance world and beyond by facilitating decentralized autonomous organizations (DAOs). DAOs give the authority back to the members of a collective and empower them to make decisions without the need for a C-suite executive. DAOstack’s holographic consensus mechanism allows these collective decisions to be made on a large scale. The company has demonstrated how a DAO can work on its platform with the launch of the Genesis DAO, supported by the Alchemy interface.

Dark clouds hovered over the U.S. real estate and finance industries in 2007 when an inordinate number of subprime mortgage deals and risky business moves began to catch up with major financial institutions.

The clouds soon coalesced into a full-blown storm with the collapse of Lehman Brothers, the fourth-largest investment bank in the country at the time. Company executives had been making precarious business decisions in the interest of boosting profits while obfuscating records to mislead shareholders.

In 2008, when Lehman Brothers declared bankruptcy with more than $639 billion in assets and $619 billion in debt, it was the largest bankruptcy filing in U.S. history.

These events precipitated what would become the worst financial crisis in the U.S. since the Great Depression.

This scenario is a prime example of the Principal-Agent Problem, which in economic and political science circles, is used to demonstrate imperfections in our modern systems of governance. Essentially, the agent (bank executives) takes actions that are not in the best interests of the principle (the shareholders).

In recent years, with the advent of blockchain technology, new ways have emerged to solve the Principal-Agent Problem and ensure that all actions taken by an organization are truly in the interest of the principal.

DAOstack is an organization that is not only leveraging blockchain to present new and innovative ways of governance, but it also has its sights set on revolutionizing the finance industry.

“Our theory is that if you give a community the same financial tools a bank has, as well as a collaborative governance system that allows them to manage these tools effectively, they’ll make better decisions for themselves,” said Pat Rawson, Communications Director at DAOstack.

DAOstack is aiming to totally replace the modern financial sector by giving organizations and communities bottom-up authority over their own finances, Rawson said.

In the fintech world, DAO is the common acronym for a decentralized autonomous organization. Coincidentally, the word also evokes its Chinese counterpart, Tao or Dao, which means the way or path — and in more esoteric interpretations refers to the natural order of the universe.

In a harmonious twist, for groups such as DAOstack, DAOs represent a whole new path of possibilities to truly democratize organizations with multiple stakeholders and traditional hierarchical structures.

Rawson explained that DAOs have complete transparency so an organization’s financial transactions are available to view, which eliminates issues involving corruption in a governance system. “If you have any organization and you can provably see everyone’s transactions, then you know exactly who is violating certain policies,” he said.

DAOstack aims to completely replace the structure of the modern financial sector with decentralized autonomous organizations.

DAOs also benefit from upgraded levels of security as a result of using an open-source public blockchain, Rawson said, which translates into the inability to censor DAOs.

“In a sense, these are unstoppable organizations,” he said. “Let’s say you’re in Venezuela and you form a neighborhood DAO. Now, you all have collective management of your neighborhood funds and the government can’t seize those funds, because they exist on the blockchain.”

When financial mechanisms — such as the ability to issue money against bonds or lend with interest — are taken away from banks and put into the hands of communities and trusted lending circles, Rawson said, the accumulation of capital is decentralized.

“In the past, these tools have been primarily available to monopolistic actors who want to maximize capital for themselves,” he said, “and in our lifetimes have provably demonstrated they’re not interested in the health of local communities and local organizations.”

Rawson said DAOstack can help facilitate new structures in which the collective entity has the power to make the decisions that are most beneficial for the group.

“There’s no reason 150 people can’t say, ‘Hey, we’re going to create a car insurance product, and we’re all going to pay into it and it’s going to cover all of us,’” he said. “There’s no need for an insurance company to be involved, cutting into 40% of funds.”

The notion of making these group-based decisions that work in favor of the community sounds great in theory, Rawson said, but the challenge has been determining how to create organizations that can have collaborative decision-making that scales.

“The scalability issue is where holographic consensus comes into play,” he said. “What we’re trying to do with this is resolve this inherent tension between what the values of the collective actually are and how those values are expressed in decisions.”

DAOstack has observed that, oftentimes, the larger a collective gets, the less likely decisions are made that accurately represent the collective.

“Look at the United States; the government is a huge organization,” he said. “And a lot of the decisions this organization is making are completely out of line with what the majority of Americans want. So we would say this collective is not a good, scalable, and resilient organization.”

Rawson said DAOstack’s holographic consensus framework is designed around changing that type of dynamic, so the more you scale the more aligned decisions become with the collective’s values. To accomplish this, DAOstack introduces a form of prediction around every single idea or proposal the collective has.

“It’s a sort of a form of futarchy, for those who are familiar with this concept. It’s using a prediction market mechanism to sort through the proposals of the collective,” Rawson said.

Rawson acknowledges that the idea of holographic consensus quickly progresses into complex and technical details, but recommends those who are interested in learning more read DAOstack’s detailed blog posts about the concept.

The Genesis DAO will likely steward an approximate budget of 40 million GEN (the native token of the DAOstack framework) to support the development of the DAOstack ecosystem, according to a DAOstack blog post.

The DAO began as an alpha version managing an initial fund of approximately $15,000 per month, which was controlled by about 40 staff and community members who vote on which proposals to fund.

“In 2018, we’ve gotten to know our first DAO community, Genesis, a group that has gathered around a shared interest in decentralized governance,” according to a DAOstack update. “The group that has formed Genesis and communities like it, which have an existing cause and unfulfilled collaborative potential, will be the greatest source of new DAOs in the near term.”

The Genesis DAO and any other DAOs that are built through DAOstack are assisted by the group’s budgeting and resource allocation tool called Alchemy.

“It is an interface that enables thousands of individuals to coordinate towards a common purpose, by proposing and deciding on how to spend funds in alignment with their goals and values,” according to DAOstack.

The latest release of Alchemy, named Alchemy Earth, is the first production and client-ready version of Alchemy and comes with significant performance and usability upgrades.

Creating Your Own DAO with a Squarespace-like Interface

Rawson said he’s happy to hear about anyone interested in starting a DAO, and DAOstack is glad to help facilitate the group. The organization is currently manually setting up DAO pilots after walking through a business development process with the interested party.

In the coming months, DAOstack will be streamlining this process with the launch of its DAO creator interface, which Rawson said will be similar to how users can create their own websites with Squarespace or WordPress.

“You just open up the interface, select all the different features that you want your DAO to have, list out the members for that DAO, click ‘create DAO,’ and that’s it,” he said.

In the meantime, those interested in getting involved in the DAOstack community can reach out directly to the DAOstack team at hello@daostack.io or visit their community Discord.