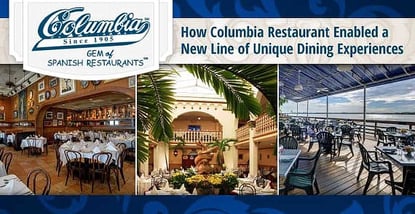 In a Nutshell: In a competitive industry where businesses continuously rise and fall, the 113-year-old Columbia Restaurant, in Tampa, Florida, has stood the test of time. The Columbia’s commitment to quality, customer service, and unique dining experience has made it the oldest restaurant in Florida — and one of the oldest family-run restaurants in the country. While other brands devise marketing strategies to establish an identity, the Columbia has an authentic story rooted in history and heritage. Its success has allowed for expansion to new Columbia locations as well as new restaurant brands and concepts. Each new restaurant has its own unique story and atmosphere, which remains true to the Columbia’s rich history.

Two years later, Casimiro turned the saloon into the Columbia Restaurant, a café serving Cuban sandwiches and café con leche to cigar factory workers. With that change, Casimiro launched what would become one of the longest-running restaurant success stories in the US. Today, the original Ybor City location is the oldest restaurant in Florida and one of fewer than 15 restaurants in the country that is more than 100 years old and still run by the founding family.

For restaurants and retailers, the Columbia’s longevity is a lesson in building brand loyalty through quality, value, attention to detail, and a unique customer experience.

The Columbia has survived Prohibition, the Great Depression, the closing of Ybor’s famous cigar factories, and financial difficulties in the early 1990s to thrive and expand. Today, it is the largest Spanish restaurant in the world after a series of expansions that began in 1919 and have included the iconic Don Quixote room, Tampa’s first air-conditioned dining room.

The fourth- and fifth-generation owners now oversee seven Columbia locations throughout Florida as well as four other restaurant brands each with a unique atmosphere, concept, and story.

Michael Kilgore spoke with us about the Columbia Restaurant’s deep history and bright future.

Columbia Restaurant Group Chief Marketing Officer Michael Kilgore said the Columbia has succeeded by staying rooted in its history and heritage with a vision of the future.

“From the beginning, the restaurant was always about food and family,” Michael said.

“That grew to include history and heritage. Some of these are family recipes that go back more than 100 years. Because it’s a family business, everything is personal, and every comment on a meal is personal.”

“Richard, for example, comes to the office and works extra hours paying attention to everything,” Michael said. “There’s not a detail too small.”

The owners are not the only family with deep ties to the restaurant. Generations of Tampa families have come to the Columbia to celebrate marriages, engagements, anniversaries, and birthdays.

An Iconic Restaurant with a Historic Story to Tell

In an age of targeted digital ads, the Columbia has built itself into one of Florida’s leading dining destinations with no paid advertising.

“Our marketing approach is different. We share our story on social media, the web, and through events we sponsor and organize,” Michael said. “The Columbia obviously has a lot of history, so we lean on that. Brands want to be authentic, but unfortunately many try too hard. We have the luxury that we don’t have to make any of this stuff up.”

The unique dining experience includes live music, flamenco dancing, and historical art and decorations. The chandelier in the Don Quixote room dates back to 1800s France. The Love and Dolphin statue in the center of the Patio Dining Room’s mosaic-tiled fountain is one of the most photographed pieces of art in Tampa. Antique Spanish tile depicts the title character from the classic Spanish novel Don Quixote.

The Love and Dolphin Statue in the Columbia’s Patio Room is one of Tampa’s most iconic pieces of art.

“We don’t have to create stories, history, or heritage. We have this great story to tell about the fascinating history of a family business. We just try to tell it in a creative, interesting way and we never have to worry about being authentic,” Michael said. “Actually, we very deliberately never use the term ‘authentic’ in any of our materials. We prefer to show, not tell.”

Florida Trend, Wine Spectator, and even the government of Spain are among the organizations that have recognized the Columbia. And the fourth- and fifth-generation owners have an unwavering commitment to protect the family business’ hard-earned reputation.

“We say we’re only as good as the last meal we served,” Michael said. “We are very happy and very proud of all the awards, but none of that matters if we’re not good today.”

Building on Authenticity to Expand into Several New Restaurant Concepts

In recent years, the organic marketing approach has expanded to other Columbia Restaurant Group brands.

In 2016, the Columbia Restaurant Group company relaunched Goody Goody, an iconic Tampa burger joint that was open from 1925 to 2005. Goody Goody had 8,000 likes on Facebook the day it opened thanks to a social media marketing campaign that included food tastings, historic advertisements from the old restaurant, and behind-the-scenes photos from the new one.

“We didn’t pay for that. We grew that organically,” Michael said. “When we opened Ulele, Goody Goody, and our other new restaurants, we tried to pull back the curtain as much as we could by telling people what we are thinking and what we are trying. We think people are genuinely excited when they feel a part of it. It’s almost as if they become brand ambassadors for us.”

Like the Columbia, each new restaurant is opened with a precise attention to detail and a commitment to creating a unique atmosphere and experience.

The music in the dining room is a customized playlist of hits from the 50s, 60s, 70s, and 80s — with some 90’s mixed in for good measure. Guitars autographed by groups such as the Traveling Wilburys and The Police decorate the dining area.

The popular Ulele restaurant is decorated with celebrated works of art — both inside and out.

Brightly colored gears decorate the front door, a nod to the building’s history as Tampa’s water pumping station in the 1920s. Paintings by Dali and Picasso, Peruvian sculptures, and stained glass from 1700s Paris are also featured.

The restaurant group is set to open Casa Santo Stefano in Ybor City in 2018. It will be a Sicilian restaurant with a focus on the cuisine and heritage of the Sicilian immigrants who settled in Tampa.

In 2019, it plans to open The Buccaneer on Southwest Florida’s Longboat Key. With that venture, the Columbia Restaurant Group will again launch a modern version of a once iconic, but now shuttered, restaurant. The Buccaneer Inn was in operation on Longboat Key from the late 1950s to the early 2000s.

“It’s rewarding for us to be able to branch out,” Michael said. “The Columbia is such a beloved brand that there is a halo effect when we start other restaurants. There is recognizable quality here, so we get a lot of crossover from people who want to see what we’re doing next.”

A Family-Owned Success Story 115 Years in the Making

One-hundred and fifteen years after Cuban immigrant Casimiro Hernandez opened a saloon in Ybor City, his business is still there. Now, the Columbia Restaurant is one of the most enduring family-owned restaurant success stories in the country.

Michael said it grew in popularity through a commitment to quality and customer satisfaction, attention to detail, calculated risks, and the creation of a unique dining experience.

When fourth-generation family member Richard Gonzmart became president of the business in the early 1990s, it was in the midst of financial hardship.

“He had to work really hard to get everything back on track. He did it by going back to the basics, focusing on every detail, being scrupulous with recipes, and making sure everything is right. That’s what got us back,” Michael said.

The success allowed the family to take additional calculated risks on expansion. Today, the group includes 13 restaurants — seven Columbia locations and four other restaurant brands in six locations — with two more concepts slated to open by 2019.

With each new endeavor, the family-owned business focuses on building long-term success.

“Short term to us is 10 years. We don’t chase food fads because, by definition, they won’t be here long,” Michael said.