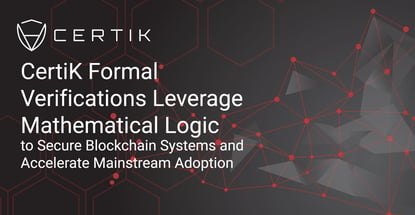 In a Nutshell: Security is critical in any blockchain network, but vulnerabilities can go undetected until hackers exploit them. CertiK allows blockchain-based enterprises to identify and resolve those costly security breaches before they happen. Through Formal Verification and penetration testing, CertiK can detect vulnerabilities, categorize them, and offer solutions to fix issues. And CertiK’s proprietary blockchain will bring the same preventative rigor to more developers, helping create a new paradigm of security in the promising and rapidly expanding sector.

When Crypto.com announced its new instant cryptocurrency payment solution, Crypto.com Chain, it took a significant step toward ushering in the mainstream adoption of digital currency. The platform will attract consumers who find it convenient and merchants who want to save on transaction fees. But it will also attract the attention of cybercriminals. So Crypto.com made securing Chain a top priority.

That’s why the company turned to CertiK to ensure its smart contracts remain safe and vulnerability-free. CertiK, which was founded by a pair of Ivy League computer science professors, leverages a proprietary Formal Verification method to perform automated audits and proactively protect blockchain-based enterprises.

“We built our own security system from the ground up, which lets us avoid small, but serious, mistakes and errors,” said Lev Novak, Marketing and Business Development at CertiK. “We work to secure the existing landscape, and we’re building the foundation for the future of automatic Formal Verification and protection.”

Any company entering the blockchain space must address three areas: scalability, decentralization, and security. With scaling and decentralization often taking up so many resources, companies can turn to CertiK for vital security expertise. The platform now secures nearly $5 billion worth of crypto assets across various exchanges.

CertiK employs Formal Verification — a process of determining whether a system’s properties satisfy certain requirements — to ensure the security of blockchain-based projects. In this case, Formal Verification means mathematically checking blockchain systems to demonstrate that they are free of all potential vulnerabilities.

This process is rigorous and precise — in essence, it’s a sophisticated version of a math teacher requiring students to show their work, which demonstrates a certain situation is objectively true. CertiK experts bring that methodology to bear on blockchain-based smart contracts.

“We audit exchanges, protocols, and tokens — essentially any blockchain that has a smart contract, we can audit that through Formal Verification,” said Sharina Mirpuri, Marketing Associate at CertiK.

CertiK audits smart contracts of any complexity and written in any major programming language. The audit process entails thorough scrutiny of the source code to detect potential vulnerabilities and suggest ways to remedy them. Each vulnerability is classified by severity, and reports include annotations and the mathematical proofs used in the Formal Verification process.

By using this method, CertiK detects potentially exploitable problems before they become costly security breaches. In turn, enterprises can efficiently correct the issues before they damage their offerings and reputation.

“That’s a huge concern in a space with so much money and so many points of access,” Novak said. “Even small errors can, like a grain of sand, irritate the whole process and lead to larger vulnerabilities.”

Any system that passes its audit receives a CertiK Verified badge, proving the authenticity of its security. Each badge includes a unique QR code that enables anyone to verify the enterprise’s certification and gain confidence that their information, and money, are protected.

CertiK offers an automated security layer for blockchain platforms that integrates with its Formal Verification engine. This additional safeguard assists in identifying and eliminating critical vulnerabilities in smart contracts as well as in distributed/decentralized applications (DApps) that run on the blockchain’s nodes.

To achieve this extra level of security, CertiK analyzes the platform and designs a mathematical model to fit its programming language. CertiK then verifies the safety of the platform’s DApps using machine-checkable proofs, or else it disproves their security with automatically generated counterexamples.

These solutions also account for the unique characteristics of any given blockchain platform, ensuring that each is tailor-made to meet client needs.

Anomalies start to surface when CertiK runs DeepSEA, CertiK’s smart contract language, and the CertiKOS technology, according to Novak. That is where CertiK shines, as it ensures that the entire auditing process — whether manual, algorithmic or some combination — is implemented effortlessly. That’s also why CertiK can offer such customized services.

“Customization is just ensuring our work is compatible with customer projects and intentions,” Novak said. “We can customize and cooperate with essentially anything and still keep the core of every project intact while securing it and hardening it for best practices.”

Formal Verification grinds through blockchain code using mathematical logic and rigor to search for and detect vulnerabilities. Problems can be detected and fixed before malicious actors can find and exploit them.

CertiK verification ensures the security of blockchain-based smart contracts and DApps. For everything else, it offers enterprise-grade penetration testing.

“At CertiK, we don’t ignore problems or hope for the best,” Novak said. “We address the environment as it stands, and protect it against those sorts of threats.”

Following its investigation, scanning, and manual review and testing of the system, Certik provides a detailed assessment of the system’s security. As with Formal Verification, vulnerabilities are classified by severity, and the report makes recommendations for remedying each one.

After the client implements the suggested fixes, CertiK conducts a retest to ensure the efficacy of the solutions and the overall safety and integrity of the system.

Blockchain companies with vast resources, including Crypto.com, rely on CertiK’s Formal Verification services to ensure the integrity of their platforms. Not every blockchain developer has access to the same funding as an established enterprise — yet they still must ensure a high level of security for users.

Luckily for them, a cost-effective solution is close at hand. CertiK’s recently announced CertiK Chain, which allows third parties to build on CertiK’s formally verified network, providing a foundation for a more secure blockchain ecosystem.

“Our test net launch will allow us to offer our security auditing technology — which runs in the tens of thousands of dollars range — at scale to developers at a much lower barrier to entry,” Novak said.

CertiK Chain aims to bring Formal Verification capabilities to any blockchain system. By allowing enterprises to grow without the hazard of increasing vulnerabilities, CertiK Chain will create a more secure digital environment even as that environment continues to expand and evolve.