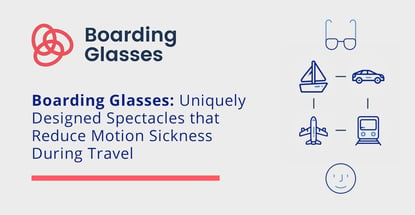 In a Nutshell: Motion sickness has long been the bane of many people’s traveling experiences. Boarding Glasses offers a science-based solution that addresses the cause of motion sickness and doesn’t simply treat the symptoms. The glasses feature four liquid-filled rings on the front and sides of the wearer’s eyes. As the liquid moves, it matches the movement perceived by the inner ear and cancels out the discrepancy between what the eyes see and what the body feels during travel. A successful partnership between Boarding Glasses and Citroën helped raise the profile of the product in a short span of time. And an independent study found that 94% of Boarding Glasses users surveyed reported a decrease in motion sickness.

Whether you’re traveling on a plane, train, boat, or in a car, motion sickness can easily take the fun out of your adventure. The excitement of arriving at your destination is tempered with a sense of dread as the plane begins to taxi or the boat shoves off from the dock.

On flights, changing altitude and turbulence can bring on nausea and the unsettling sensation of motion sickness. On the water, the nonstop motion of the vessel going up and down over waves can do the same.

Until recently, motion sick travelers were mostly at the mercy of their vehicle of choice. Some people have used Dramamine to calm the sickness, but medical professionals advise folks not to take this drug regularly or on a long-term basis. It may damage organs and interact with other medications.

Other people may rely on a few drinks to take the edge off, but that can also heighten the sensation of motion sickness for some.

Boarding Glasses offers a science-based solution that is as simple as putting on and taking off a pair of spectacles.

At CardRates, we love to cash in our credit card rewards for great deals when we travel, whether it’s in the form of air miles, hotel discounts, or great dining deals. Of course, our feet have been firmly planted on the ground since the onset of the COVID-19 pandemic.

In the meantime, we’ve still been daydreaming about our next vacation, and as always, scoping out the latest travel accessories. We were intrigued by Boarding Glasses’ simple but ingenious solution to motion sickness, so we reached out to Antoine Jeannin, CEO of Boarding Ring, the company that designed Boarding Glasses, to learn more.

“Most solutions today don’t target the real cause of motion sickness, they attempt to cure the symptoms only,” Jeannin said. “The cause is a mismatch between the movements your eyes cannot see — because they are inside the vehicle — and the real movement your body is feeling and experiencing.”

This can cause a crisis situation in the travelers’ brain, which is what causes severe motion sickness, according to the company website.

But Boarding Glasses gets to the root of the problem.

Jeannin said his father, who invented the glasses, suffered from motion sickness himself. He also worked in the optics industry and was interested in studying the senses.

After conducting his own research and building a number of prototypes, Jeannin’s father came up with the current design for Boarding Glasses and launched Boarding Ring in 2015.

The glasses serve as a kind of visible inner ear, Jeannin said.

The liquid-filled rings are located in front of the eyes and on the outside corners of the eyes so the liquid’s movement is visible from all sides.

“It creates an artificial horizon in the periphery of the visual field, without disturbing the central vision,” according to the company. “The eyes have thus again access to the reality of the movement, the sensory conflict disappears instantaneously and the sickness of the transports fades in a few minutes.”

Jeannin said motion sick travelers usually only need to wear the glasses for a few minutes until their body adjusts to the movement.

Boarding Ring glasses are available for purchase on the company website.

A Successful Partnership with Citroën Helped Raise Visibility of the Glasses

Jeannin said that when the company began promoting Boarding Glasses, it initially focused on the maritime industry simply because Ollioules, France — the company’s home base — is near the sea.

The company then focused its efforts on the automobile industry and began demonstrating the glasses at events and trade shows, he said. The motion sickness solution caught the attention of French automotive company Citroën.

Antoine Jeannin is the CEO of Boarding Ring, the company that produces Boarding Glasses.

“When thinking about a communication idea for departures on summer holidays, the BETC agency imagined for its client Citroën an operation focused on the onboard experience, and more precisely on the passengers,” according to Boarding Ring.

Nearly 40% of automotive passengers can experience motion sickness, according to the company. Citroën reached out to Boarding Ring and proposed a partnership that would be beneficial for both companies.

“They wanted to improve the user experience in their cars so we designed glasses based on our technology and adapted it to their style,” Jeannin said. “It was a big accelerator for us.”

The initial run of 100 glasses for Citroën, cleverly called Seetroën Glasses, sold out within minutes with orders coming in from all over the world.

“Facing this massive traction, the marketing operation became an actual commercial success,” according to the company. “Today, more than 20,000 pairs of Seetroën have been shipped, and are being used daily with satisfaction!”

Partially inspired by this successful partnership, Boarding Ring is now focusing heavily on the e-commerce market, Jeannin said. It also plans on conducting a round of fundraising within the next year.

Satisfied Customers Confirm the Effectiveness of the Motion Sickness Solution

Most people will immediately notice that Boarding Glasses were designed for function over fashion. While some customers acknowledge that the glasses look weird, as Jeannin put it, they can’t deny the fact that they work, he said.

“The people who get very sick, they don’t care about how they look,” he said. “When you throw up, you look ugly anyway, so this option is better.”

For those who are still unsure about wearing the uniquely styled glasses, Jeannin said that once people understand that they generally only need to wear them for a few minutes, their fashion concerns are allayed.

There is no shortage of testimonials from satisfied Boarding Glasses customers.

“I have been wearing them for two years and these glasses have changed my life, I no longer fear the drives on the Corsica roads. Before the goggles, any trip meant a tough moment. Now the problem is solved! Thanks a thousand times.” — Ambre R. on the Boarding Glasses website

Boarding Ring’s social media pages are also filled with similar glowing testimonials from users who don’t have to worry about motion sickness anymore.

Parents with motion sick children have also found Boarding Glasses to be effective for their youngsters. Boarding Ring recommends that the glasses be used for children 9 years or older because they are not designed to fit on a young child’s face, and their peripheral vision is still not fully developed.

“My son has been wearing these glasses for more than 15 days, and miracle, no trouble anymore: no craving to vomit, no symptoms anymore, and no fear, the dream! We can now drive quietly. I am really delighted with this purchase.” — Sabine P. on the Boarding Glasses website

“It showed that more than 94% of the users have a better travel experience while using the glasses, so that is very significant,” he said.